What Is CBD And Why Is It In Everything Now?

by Mary Jo Dilonardo: From bath bombs to body salves, lip balms to dog treats, there’s a dizzying array of products that contain CBD, the latest “it” ingredient… 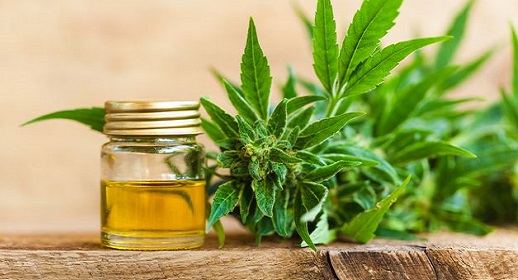 Advocates say CBD — or cannabidiol — can do everything from soothe anxiety to ease pain, but how much heft is behind the hype? And are all these products even legal?

It’s a gray area on both counts. Here’s a look on what CBD is and what it allegedly does, as well as where you can find it and if you can even legally buy it.

CBD is one of the thousands of compounds produced by the cannabis plant, explains Live Science. It belongs to a class called cannabinoids that also includes THC (tetrahydrocannabinol), which is the psychoactive compound in marijuana that gets people high. CBD doesn’t have those psychoactive affects, but it’s believed to have some therapeutic properties.

In addition, CBD users speak of a sort of body euphoria versus a mental buzz.

“Physically, it’s like taking a warm bath, melting the tension away,” Gabe Kennedy, a founder of Plant People, a start-up in New York that sells CBD capsules and oils, tells The New York Times. “It is balancing; a leveling, smoothing sensation in the body mostly, and an evenness of attention in the mind.”

To get into the weeds, so to speak, cannabis is a family of plants classified primarily as Cannabis indica or Cannabis sativa. Marijuana can be a member of either group, while hemp is part of the sativa family. The plants might look somewhat similar, but their makeup is quite different, reports Medium. Hemp contains a very low concentration of THC (.3% or less), while marijuana is high in THC with concentrations between 15 and 40%.

Because of these differences, marijuana is grown primarily for its recreational and medicinal uses, while hemp is grown for industrial purposes. It is used for clothing, paper, building material, biofuel and to produce other resources. Most recently, it has become an important part of the CBD-infused products business.

What does CBD do?

Some say taking CBD is like taking a warm bath, with stress just melting away. (Photo: TORWAISTUDIO/Shutterstock)

CBD has been credited with successfully treating a range of conditions from epileptic seizures and insomnia to pain and inflammation. But there’s little scientific evidence for most of these benefits, says HealthDay.

At this point, only one use for CBD has enough evidence to warrant approval for medical treatment. In June 2018, the Food and Drug Administration (FDA) approved a CBD-based drug called Epidiolex as a treatment for several severe forms of rare childhood epilepsy. It’s the first government-approved medical use for CBD.

That doesn’t mean CBD isn’t high on the research radar. The National Institutes of Health clinical trials database lists more than 150 trials involving CBD that are currently active or in the process of recruiting.

Scientists in Australia found that cannabidiol killed all strains of a powerful bacteria they tested, including some responsible for many serious infections that have been mostly resistant to existing antibiotics. They believe cannabidiol “is a promising new antibiotic worth further investigation,” said Dr. Mark Blaskovich at The University of Queensland’s Institute for Molecular Bioscience’s Centre for Superbug Solutions, in a statement. The findings were presented in June 2019 at the annual conference of the American Society for Microbiology, and haven’t been published in a peer-reviewed study.

“CBD is the most promising drug that has come out for neuropsychiatric diseases in the last 50 years,” Dr. Esther Blessing, an assistant professor at New York University School of Medicine, who is coordinating a study of CBD as a treatment for post-traumatic stress disorder and alcohol use disorder, tells The New York Times. “The reason it is so promising is that it has a unique combination of safety and effectiveness across of very broad range of conditions.”

On May 31, the FDA held its first public hearing about the safety of products containing cannabis. The goal of the hearing was to “identify and collate all available data to help us answer these questions in order to make sure that the American public is protected — including to the extent CBD is being introduced into our food supply or other common consumer products,” Michael Felberbaum, an FDA spokesman, told CNN.

Industry watchers are hopeful that the FDA will create regulations for products so that manufacturers can’t make false claims or distribute unsafe items.

“There needs to be clear steps in informing the public that there is no science behind the generic claims made about CBD,” Dr. Yasmin Hurd, director of the Addiction Institute at Mount Sinai in New York and a cannabis researcher, told CNN.

But Hurd worries that the FDA is late to the CBD discussion.

“The market and the public have already let the genie out of the bottle and it will be difficult to put it back in without the FDA and government showing clear proof that there is evidence showing a negative health impact.”

Many mail-order sites promise that CBD and CBD products are “legal in all 50 states” but in reality, the legality isn’t so simple. The law depends on where you live and whether the CBD comes from marijuana or hemp.

“It’s not legal. It’s just not,” DEA spokesman Rusty Payne told WTHR, an Indiana news station. He said cannabis plants are considered a Schedule I controlled substance, and therefore medicinal oils derived from cannabis plants are illegal. He said the DEA believes the Farm Bill permits only CBD research — not CBD marketing and sales. “Anybody who’s in violation [of the federal laws] always runs that risk of arrest and prosecution.”

That said, Payne says he doubts DEA is going to go chasing after people who have benefited from CBD.

“It would not be an appropriate use of federal resources to go after a mother because her child has epileptic seizures and has found something that can help and has helped,” he said. “Are they breaking the law? Yes, they are. Are we going to break her door down? Absolutely not. And I don’t think she’ll be charged by any U.S. Attorney.”

CBD is in everything

In it’s most basic form, CBD is found in capsules and oils. In its early days, it was only found in natural food stores as a supplement that people could swallow or mix in foods. But now CBD-infused products are found in everything from toiletries and beauty items to foods and pet care. They’re easy to buy online.

When it comes to beauty, you can find CBD bath bombs, CBD lip balms and CBD lotions. Bath bombs are one of the most popular products at the Atascadero, California-based Life Elements, which sells a line of CBD-infused personal care items. With a caveat that the product is not intended to “diagnose, treat, prevent or cure any disease,” the website suggests possible ways the bath bomb might offer relief, including sore muscles, inflammation, stress and chronic pain.

Curt Van Inwegen, co-founder of Life Elements, tells MNN that demographics for his products have started to change. “The average age of our customer (from our website data) has moved from 35-45 years old to 45-67 years of age…. and everyone is looking to reduce pain in a better way.”

People often use CBD products for pets to try to treat anxiety and pain. (Photo: Austin and Kat)

People are also exploring CBD products for their pets. Online pet groups are packed with discussions of CBD-infused dog treats and CBD oil for dogs and cats as people tell tales of how the products might help ease anxiety for storms or car rides or help relieve aches and pains.

Christina O’Reilly started Rowley’s Good Stuff with her husband, Mike, when their 160-pound dog, Rolo, was diagnosed with bone cancer last year and the illness was really painful for him.

“We decided to try CBD oil products in an attempt to help with his pain, and we had positive results from our local pet store’s offerings,” O’Reilly tells MNN. “Unfortunately, we found the entire process extremely confusing. There were too many choices on the market, and most had complex ingredient lists.”

The O’Reillys turned to some friends in the medical cannabis industry for information. When they had trouble getting Rolo to take straight CBD, they mixed it with peanut butter and honey. They now sell the CBD-peanut butter mixture in a tube, which they say makes it tastier and easier to dose.

Kat Donatello, the founder of Austin and Kat, also created her business because of her dog. She was trying to help Brady get through his golden years and developed biscuits containing CBD.

“For the most part, people who buy our products are people who just really love their pets. They want to help them and are looking for a natural way to do so,” Donatello tells MNN.

“We have every type of pet using our treats and oils: older dogs who might struggle with mobility, younger dogs who can’t seem to settle down and even cats with extreme separation anxiety. The most emotional stories come from owners saying their pup could walk again while on our treats and were able to do the things they loved previously, like being playful or being affectionate. We also frequently get emails from loyal customers telling us their pup passed away, but they were so thankful they could be happy and comfortable in their final years because of Austin and Kat. When that happens the whole office is in tears.”

Experts suggests buying from a company that shows proof of third-party testing for potency, pesticides and contaminants. (Photo: Anton Watman/Shutterstock)

There’s no regulation in the CBD market, so there’s a wide range in quality, Marcel Bonn-Miller, an adjunct assistant professor of psychology in psychiatry at the University of Pennsylvania School of Medicine, tells HealthDay.

“It really is the Wild West,” Bonn-Miller says. “Joe Bob who starts up a CBD company could say whatever the hell he wants on a label and sell it to people.”

In a 2017 study led by Bonn-Miller, he found that nearly seven of 10 CBD products didn’t contain the amount promised on the label. Almost 43% contained too little CBD, while about 26% contained too much. In addition, about one in five CBD products contained the psychoactive substance THC. That’s an issue because THC can make seizures or anxiety worse.

“Those are the sorts of things you need to be careful about,” Bonn-Miller said.

Experts suggest buying from a company that provides a COA, or certificate of analysis. It’s proof that a third-party, independent laboratory tested for potency, pesticides and contaminants.

COA information is front and center on the website for Bluebird Botanicals, which sells CBD products ranging from oil blends and capsules to CBD products for pets.

“We believe customers have a right to know exactly what they are putting into their bodies, which is why we’ve invested so heavily into our industry-leading quality control system,” Brandon Beatty, CEO of Bluebird Botanicals, tells MNN. “Customers can view multiple third-party lab tests for every single batch of our products through our public online database. Through these tests, they can verify the potency of their product as well as any possible contaminants such as pesticides, heavy metals and/or mycotoxins.”

“We have customers who are athletes, mothers, chefs, activists, musicians, artists, etc. It truly is a product for all people.”