Why Not Wearing Shoes Does A Body Good

by Christian Cotroneo: It turns out, after all these millennia, Mother Nature still makes the most functional footwear… 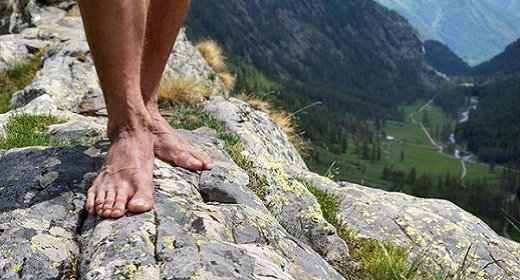 In a new study, published in the journal Nature this week, an international team of researchers found that a well-seasoned (i.e. callused) foot gives us better protection than shoes. In fact, they suggest, shoes have actually desensitized our feet, while changing the way we walk. And over time, that has dramatically altered the human gait.

“I’m not saying people shouldn’t wear shoes,” Harvard professor and study co-author Daniel E. Lieberman, tells Scientific American in a paywalled article. Instead, he suggests more research is needed on how footwear has altered our bodies and habits — and maybe what we gave up when we started covering up our feet.

Like calluses. For their study, Lieberman and his colleagues spent a lot of time looking at calluses — those hardened knots of keratin that form on feet that are frequently exposed to the raw elements. In all, they examined 100 adults, mostly from Kenya — with about half the participants eschewing footwear most of the time.

They found the barefoot walkers, despite thick calluses, could very much feel the ground beneath their feet. In fact, even the thickest calluses didn’t dampen tactile sensitivity. But, unsurprisingly, wrapping feet up in rubber and plastic and binding them with shoelaces did.

It turns out as thick as calluses are, they still feel the ground and transmit information to the brain. Shoes, not so much. That could be a major issue for people, especially the elderly, who have trouble maintaining balance, often resulting in serious injury.

As we age, we lose sensitivity in our feet, and a life lived in shoes could exacerbate the problem.

“If your feet can’t sense what’s going on on the ground, maybe you’re more susceptible and more vulnerable [to falls], and shoes may be a part of that,” Lieberman explains. “If we can give people’s brains, their reflexes, more information, that might help them.”

How do we get those nerves that run from foot to brain, called afferents, to keep the lines of communication open? Get a little more intimate with the earth. Embrace the callus.

“We suggest children to walk barefoot on humid grass with the purpose to stimulate the afferents for developmental reasons,” study co-author Thomas Milani of Germany’s Chemnitz University of Technology, explains to LiveScience.

But again, that’s not to suggest we clear out our shoe closets. (In fact, there are plenty of good reasons to wear shoes, like avoiding plantar warts and athlete’s foot.) The world has changed over the last 200,000 years of human history.

Simple shoes — like sandals and moccasins — may have arrived on the scene around 40,000 years ago. Fancier footwear, like this 5,500-year old leather shoe, showed up much later.

And those legendary air-cushioned icons known as Nike Air? They date back to 1979 AD.

Just like the earth sculpted human feet for so many tens of thousands of years, so too has modern footwear changed us. The researchers found that all that cushiony goodness and insulation doesn’t make the impact of each footfall disappear. We just feel it less because the energy is transferred to joints higher up the leg. As a result, we likely walk much differently than our shoeless ancestors did.

Bare feet read the environment and relay that data to the brain. (Photo: Osadchaya Olga/Shutterstock)

Then there’s the prickly issue of protecting our tender soles from the hazards of urban walkways. And snow, ice and slush probably feel how you imagine they would — but would never dare try.

Walnut-like calluses, according to researchers, would have offered ancient humans protection. No foot exposed to this world stays pink and innocent for long. Instead, knotted bumps of tough keratin form to buffer and protect those soles.

Besides, an entirely shoe-free existence poses its own problems in the modern world.

Like starvation. How many grocers and restaurants will deny you sustenance citing a strict “no shirt-no-shoes-no-service” policy?

You may also die of loneliness. Finding a partner who shares your passion for exposed feet — much less someone who appreciates the scent of a toe bouquet — won’t be easy.

Better to find just the right balance between covering up those feet for civil society and seizing every opportunity to set them free. Like on a sunny summer day, in a grassy park when you can almost hear your feet chattering happily with the ground beneath them.

They do, after all, have a lot to catch up on.