The Story Of Aboriginal Art 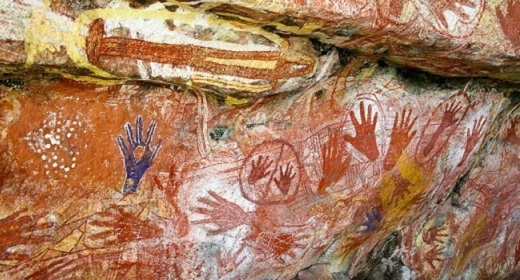 This is when Aborigine’s first settled in Australia.  The first evidence of Aboriginal ethos or philosophy is evident in the still visible rock art which dates back more than 20,000 years.

Ochres were used to paint on rocks.  Archaeologists have been able to date remains and findings as far back as 40,000 to 60,000 years from discoveries of primal campsites.

There is no written language for Australian Aboriginal People so in order to convey their important cultural stories through the generations it is portrayed by symbols/icons through their artwork.

It is imperative to pass on information to preserve their culture. Indigenous art is centered on story telling. It is used as a chronical to convey knowledge of the land, events and beliefs of the Aboriginal people.

The use of symbols is an alternate way to writing down stories of cultural significance, teaching survival and use of the land. The interpretations of the iconography differ depending on the audience.

When being told to children it would take on a simpler form highlighting the educational and behavioural aspect.  There can be a combination of information and moral teachings behind the story.  The children are taught right from wrong and the consequences of good and bad behaviour.

The stories, however would be interpreted at a very different and higher level form when teaching to initiated elders.

Although Australian Aboriginals have been using ochres as body paint, on bark and rocks for tens of thousands of years it was not until the 1930’s that the first paintings were done.

These were not done in ochre or in dot art but in water colour at the Hermannsburg mission near Alice Springs.

They illustrated desert landscapes.  The first exhibition was in 1937 by the most famous of the first aboriginal watercolour painters, Albert Namatjira. His exhibition was held in Adelaide.

Below are several of his artworks and a collage of images.

Up until the early 1970s artists mainly used watercolours.  Ochre and bark paintings were starting to become available to non-indigenous admirers and at Ernabella mission in 1948 an art and craft centre was founded.

Traditionally paintings by Aboriginals were drawn on rock walls, ceremonial articles, as body paint and most significantly drawn in dirt or sand together with songs or stories.  Artwork we see today on canvas and board commenced merely 50 years ago.

In 1971, a school teacher named Geoffrey Bardon was working with Aboriginal children in Papunya, near Alice Springs.  He noticed whilst the Aboriginal men were telling stories they would draw symbols in the sand.

He encouraged them to paint the stories onto canvas and board.  This began the famous Aboriginal art movement. It was a major jump for indigenous people to start painting their stories onto western facades which was a very foreign concept to them.

Since then Australian Aboriginal Art has been identified as the most exciting contemporary art form of the 20th Century. Aboriginal Artists need permission to paint particular stories.

They inherit the rights to these stories which are passed down through generations within certain skin groups. An Aboriginal artist cannot paint a story that does not belong to them through family.

This is the ancient story of the Milky Way and the Seven Sisters (Pleiades). This Dreaming was inherited by Gabriella from her mother, handed down to her from her paternal grandmother, Long Rose, given to Gabriella by her father.

Tarisse was handed down the Earth Images style to paint by her father, William King Jungala. It is a macro view of land around the small remote town of Katherine, the area where her Gurindji tribe once inhabited.

Creation Law is the heart of Aboriginal culture and consequently for Aboriginal art.  It sets down the Dreaming which provides the identity for Aboriginal people and their association or link to the land.

Dreamtime or Jukurrpa and Tingari (the term varies according to their particular local language) is the translation of the Creation of time for the Aboriginal People.  Most Aboriginal Artists paint facets of their Dreaming which forms a share of their inheritance and identity.

Many people believe that dots were used to hide information from white men when the Aboriginal people became afraid that they would be able to see and understand their sacred, private knowledge.  The dots were used to obscure the secret symbols or iconography underneath.

Aboriginal art differs in character and style depending from which region the artist is from and what language is spoken.  Most contemporary art can be recognised from the community where it was created.

Much more than just dots, the patterns and symbols can mean different things to different people from different regions of the country.

Dot painting is identifiable to the Central and Western desert.

Cross-hatching (Rarrk) design and x-ray paintings come from the Northern Territory and in particular Arnhem Land.

The Wandjina spirit beings come from the Kimberley. In particular Kulumburu.

The use for ochre paints is marked in Arnhem Land and east Kimberley. Materials (colours) used for Aboriginal art was originally obtained from the local land. Ochre or iron clay pigments were used to produce colours such as white, yellow, red and black from charcoal.

Other colours were soon added such as smokey greys, sage greens and saltbush mauves.

During the mid 1980’s with more Aboriginal women artists, appeared on the scene and a wider range of modern colours were chosen and bright desert paintings started to arrive on the market.

Choice of colour continues to be an identify of style in many communities; Papunya Tula, part of the western desert art movement is known for its use of soft earth colours whilst many other Western Desert Communities opt for strong primary colours.

The styles vary dramatically even within regions and there is certainly no hard rule here as can be seen in many of Papunya’s artworks that don’t necessarily follow this thinking.

Other artistic variations pinpoint more closely to specific communities. Again, the styles can vary significantly within communities as well, although many become “well known” for a particular style of art.

A very popular style adopted by artists painting from an aerial view. Many Indigenous artists imagine themselves hovering over the land (country) observing both the natural and metaphysical forms or markings of the landscape.

This characteristic style is quite popular and has led to some incredible works being produced. Knowledge of water sources and locations of bush tucker are drawn onto these maps.

Songlines or Dreaming tracks laid down in the Creation time by the spirit Ancestors are also laid down by the artist. These bird’s eye views are characteristic of a hunter and gatherer society.

They read the earth surface closely for signs of life, for tracking animals and recognising recent events.

May 2007 saw the first piece of indigenous art sold for more than $1 million. It was achieved by Emily Kame Kngwarreye’s work ‘Earth’s Creation’ also sold in 2007 to a private buyer for $1.056 million.

Aboriginal Art is equally at home in both galleries and museums. The Australian Aboriginal is arguably the most successful and certainly the longest surviving culture in human history.

It is complex and focused on long term survival in the most hostile of environments.  It has deep knowledge, spiritual, cultural and practical survival teachings.

Aboriginal Art reflects the earliest period of this ancient culture; it has both artistic and anthropological merit. This is one of the reasons it is so special and important.

Contemporary Aboriginal art has been an incentive for remote Aboriginal communities, in many places being the only business in small communities providing significant income to Aboriginal families.

The art movement has helped to strengthen culture in Aboriginal society by reinforcing the values of traditional knowledge, which forms the basis of Aboriginal art.

Now there is much Aboriginal art being produced in hundreds of remote communities around Australia and by urban Aboriginal artists.

Supporting Aboriginal art has a secondary effect in supporting the language and culture of Indigenous families who chose to live in remote locations linked to their own ancestral lands.

These groups are the largest contributors to art works seen in galleries and museums around the country.

Aboriginal art has brought about a revival of their culture in many ways.  It has substantially knocked down barriers of prejudice and misunderstanding on the part of westerners.

Our admiration of Indigenous art and our readiness to pay for it has helped Aboriginal people financially and most importantly given them a place of respect, standing and greater confidence.

It has revitalised young Aboriginal’s appreciation and understanding of their culture through the teachings of the elders through this medium. Westerners admire the outstanding beauty and meaning of Aboriginal art which has completely changed relationships between the people and has helped build stronger bridges of understanding.