How Moon Landing Conspiracy Theories Began And Why They Persist Today

by Peter Knight: Bill Kaysing was a former US Navy officer who worked as a technical writer for one of the rocket manufacturers for NASA’s Apollo moon missions… 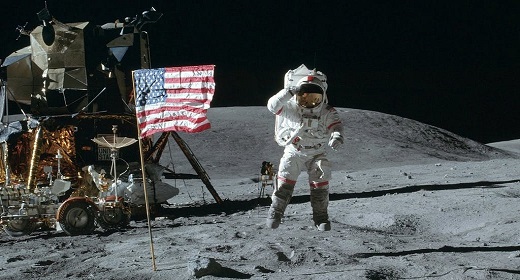 He claimed that he had inside knowledge of a government conspiracy to fake the moon landings, and many conspiracy theories about the Apollo moon landings which persist to this day can be traced back to his 1976 book, We Never Went to the Moon: America’s Thirty Billion Dollar Swindle.

The basic template of the conspiracy theory is that NASA couldn’t manage to safely land a man on the moon by the end of the 1960s as President John F Kennedy had promised, so it only sent astronauts into Earth orbit. Conspiracy theorists then argue that NASA staged the moon landings in a film studio and that there are tell-tale signs on the footage and the photos that give the game away. They claim that NASA has covered up the elaborate hoax ever since.

Moon landing sceptics point to supposed clues such as photos that appear to show the astronauts in front of cross hairs that were etched on the camera glass, or a mysterious letter C visible on a moon rock. These and many other seeming anomalies have been debunked, but moon landing conspiracy theories have persisted in the popular imagination.

In the US, opinion polls indicate that between 5-10% of Americans distrust the official version of events. In the UK, a YouGov poll in 2012 found that 12% of Britons believed in the conspiracy theory. A recent survey found that 20% of Italians believe that the moon landings were a hoax, while a 2018 poll in Russia put the figure there as high as 57%, unsurprising given the popularity of anti-Western conspiracy theories there.

That Kaysing’s conspiracy theory took hold in mid-1970s America is in large part due to a wider crisis of trust in the country at the time. In 1971, citizens read the leaked Pentagon Papers, showing that the Johnson administration had been systematically lying about the Vietnam War. They tuned in nightly to the hearings about the Watergate break-in and subsequent cover-up.

A series of congressional reports detailed CIA malfeasance both at home and abroad, and in 1976, the House Select Committee on Assassinations concluded – in contrast to the Warren Commission more than a decade earlier – that there was a high probability that there had been a conspiracy to kill Kennedy. These revelations had helped fuel a wider shift in conspiracy thinking since the late 1960s, from a belief in external enemies, such as Communists, to the suspicion that the American state was itself conspiring against its citizens.

Moon landing conspiracy theories have proved particularly sticky ever since. To understand their popularity we need to consider their cultural context, as much as the psychological dispositions of believers.

As with the Kennedy assassination, they formed a new kind of conspiracy theorising. These theories reinterpret the publicly available evidence, finding inconsistencies in the official record, rather than uncovering suppressed information. Visual evidence is crucial: for all their scepticism, their starting point is that seeing is believing. In the realm of photo evidence, the assumption is that everyone can be a detective. In the conspiracy theory communities that emerged at the tail-end of the 1960s, the self-taught buff became central.