How Tall Is The Tallest Tree In The World?

by Melissa Breyer: You think Big Ben is tall? It’s got nothing on the tallest tree in the world… 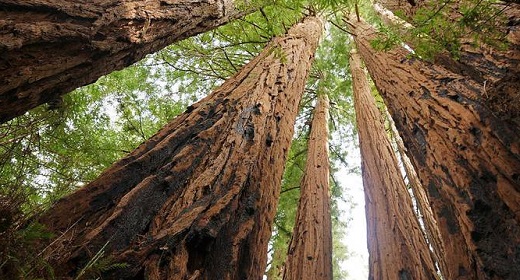 Humans are the funniest species; and I don’t mean in a stand-up-comic kind of way. Just because we send people to the moon and have invented things like  smartphones, we think we’re the coolest organisms out there. But you know what other organism are cool? Well, all of them actually, besides mosquitoes … but I’m heading towards trees here, because trees are just really, truly magnificent.

Among many impressive traits, their stature is one thing that really sets them apart from all the other living things. They may be rooted in the ground unable to move laterally, but they stretch and soar, exploring the realm of the birds as they reach for the sky.

The tallest of the tall are California’s coast redwoods (Sequoia sempervirens). They are so tall that mats of soil on the upper branches support other plants and whole communities of worms, insects, salamanders and mammals. Plants that grow on other plants are called epiphytes; some of the redwoods’ epiphytes are trees themselves. Some of the trees that have been documented growing on coast redwoods reach heights of 40 feet on their own!

How tall is the tallest tree?

The tallest known living tree is a coast redwood called Hyperion, which was 380 feet and 1 inch (115.85 meters) when it was last measured in 2017. Discovered in California’s Redwood National Park in 2006, Hyperion is around 1,200 years old and is currently growing 1.5 inches per year. At this rate, Hyperion should remain the tallest tree until 2031. At that point, Paradox, an up and comer in Humboldt Redwoods State Park who is growing at the rate of 7.5 inches a year, will likely take the crown.

Even when standing beneath these towering green gods and goddesses, it would be hard to appreciate just how tall they are. One wouldn’t even be able to see their treetops. So to give you an idea, I like this illustrationthat shows not just Hyperion’s staggering stature, but some of the planet’s other noteworthy trees as well.

(One meter is equivalent to just over a yard.)

And since you might have missed it, check out the itty-bitty organism on the far left. Hard to believe the moxie that one has! Sure it’s got a big brain and a lot of ego, but can it grow 40-foot trees on its shoulders?