by Sean O’Kane: A new industrial storage product coming as the company’s lost its lead in home solar… 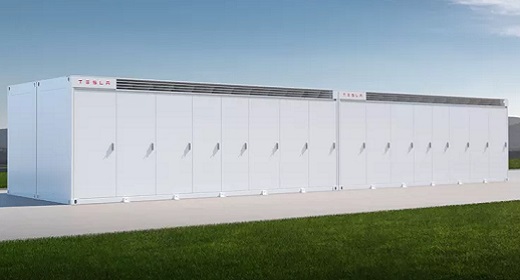 Tesla announced a new massive battery today called Megapack that could replace so-called “peaker” power plants, which provide energy when a local electrical grid gets overloaded. Tesla says that Pacific Gas and Electric (PG&E) will deploy several Megapacks at Moss Landing on Monterrey Bay in California, which is one of four locations where the California utility plans to install more cost-effective energy storage solutions.

Each Megapack can store up to 3 megawatt hours (MWh) of energy at a time, and it’s possible to string enough Megapacks together to create a battery with more than 1 GWh of energy storage, Tesla says. The company says this would be enough energy to power “every home in San Francisco for six hours.” Telsa will deliver the Megapacks fully assembled, and they include “battery modules, bi-directional inverters, a thermal management system, an AC main breaker and controls.” Tesla says the Megapack takes up 40 percent less space, requires a tenth of the parts to build, and can be assembled 10 times as fast as alternative energy storage solutions.

Tesla has taken on increasingly massive energy storage projects over the last few years. The company has sold its Powerwall home batteries for roughly four years, which capture and store energy generated by solar panels. In 2015, Tesla released a product called Powerpack, which is essentially an industrial version of Powerwall meant to be “infinitely scalable.” Tesla recently finished building the largest lithium-ion battery in the world in Australia using Powerpacks. It has a capacity of 129 MWh and can deliver 100 MW of power.

These more industrial-focused products have helped keep the energy side of Tesla’s business afloat at a time when its solar panel business is struggling. The company installed fewer traditional solar panels in the second quarter of 2019 than in any other quarter since it bought SolarCity in 2016. (It also would have been the lowest installation rate for SolarCity since 2013.) Tesla closed a dozen solar installation centers in early 2018 and also backed out of a deal to sell solar panels at Home Depot, and has ceded the industry lead that SolarCity once had.

The company has spent years finishing the design of its “solar roof,” a next-generation version of solar panels that take the shape of roof tiles. CEO Elon Musk unveiled the solar roof in 2016 as Tesla was in the midst of acquiring SolarCity, but the complexity of the product has led to delays in the rollout. (Tesla has installed solar roofs on a few homes, and said in a financial filing on Monday that it plans to “expand installations” to “eight states in the United States during the second quarter of 2019,” though Musk has said the company is still finalizing the third version of the design.)

Tesla deployed 415 MWh worth of Powerwalls and Powerpacks in the second quarter of 2019, a record for the company. Throughout 2018 and into early 2019, the company had to scale back the number of Powerwall and Powerpack products it deployed because it needed the batteries to support the dramatic increase in Model 3 production.