by Dr. Alberto Villoldo: The Buddha, who had lived a sheltered life of luxury as the young prince Siddhartha… 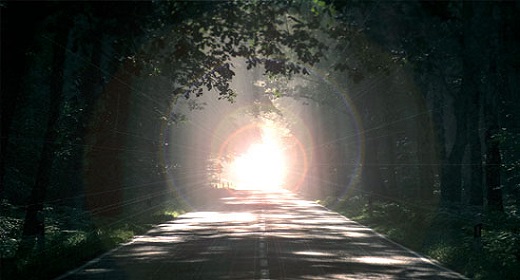 was called to his initiation at the age of 29 when he first left the palace and traveled into the countryside. Along the way he saw a bent old man and asked his charioteer if age would befall all people. When his driver said yes, the prince was disturbed.

As he continued, he witnessed disease, hunger, and death in the form of a rotting corpse. Siddhartha was confused and distraught, for the “ugly” side of life had been kept from him during his youth. Now his innocence was shattered by the reality outside the palace walls, and no doubt he realized that he too would share the same fate as his subjects.

In what is known as the Buddha’s “great departure,” the young prince renounced his life of ease, shaved his head like a monk, and went into the streets to beg for his food. The great departure represents an essential element of every initiation—leaving behind the comfort of the familiar, a difficult renunciation even when the familiar is painful, as in a bad job or relationship.

The Buddha could not have attained his illumination sipping tea in the palace gardens. He had to step into the unknown world outside the palace. The king sent servants to entice the prince home with food and drink, but the young Buddha-to-be refused. He did not allow himself to be seduced by his previous life.

Instead, he sat in silence under a bodhi (fig) tree to meditate on the questions he wanted answers to: Why must we suffer? Is there any way out? Imagine sitting under a tree in the blistering Indian heat with flies landing on your face, attractive young women strolling by, lepers sleeping next to you, and children shouting and playing around you, not to mention the gnawing hunger in your gut—not an easy task. Siddhartha confronted all these challenges internally. He must have faced every fear and every demon conceivable to man.

In the end, the Buddha discovered that suffering could be eliminated altogether. After his illumination, he returned with a gift of wisdom that he shared with all who would listen. The Four Noble Truths remain at the core of Buddhism today. They are:

The teachings of Buddhism have spread all over the world, for the Four Noble Truths are a universal wisdom. But just as important is the Buddha’s journey of initiation—a call to action that each of us must embark on, for by doing so we will learn to overcome suffering in our own lives.

Should we remain content just hearing about the Buddha’s teaching, instead of going ourselves to meditate under a fig tree? Is it enough to just read about the 40 days that Jesus spent in the desert, instead of going out on our own vision quest? My answer is that we must find out for ourselves what the masters and sages discovered, in order to attain our own illumination.

True initiation is empowered by facing personal challenges and experiencing the spiritual rebirth that follows. The vision quest can heal your body and mend your soul. However, like Siddhartha, you must leave the comfort of the castle (or the couch) and sit under your version of the bodhi tree.

We all have a dozen reasons why we can’t leave the castle or the couch just yet: not enough money, not enough time, too many e-mails to respond to. I myself postponed the journey until I received a dire health diagnosis and saw the end of my life before me. My advice? Don’t wait until then!

A vision quest takes commitment and will likely cause some physical and emotional discomfort. But it’s a powerful way to initiate transformation, a means of jump-starting our personal evolution.

The lore says that during the long night leading to his enlightenment, the Buddha acquired three gifts: the divine eye of omniscient vision and knowledge of all his previous existences; understanding of karma and the chain of causality and release, or liberation; and the Four Noble Truths—the fundamental laws of existence.

It is said that the Buddha considered keeping this wisdom to himself, doubting that humans were ready for such a teaching, but Brahma intervened, persuading him to share with men and gods the profound truths that he had discovered.

What do we do after our own vision quest? Do we, like the Buddha, go into the world and teach what we’ve learned? Heroes and heroines throughout history (both mythic and real) remind us that our goal is to establish a relationship with the universal guiding principle we call One Spirit. And then we can set about repairing the torn fabric of our own lives, our health, and humanity, which is sorely in need of any wisdom we can share.