by Katherine Kornei: Aurorae—those bright waves of color that light up high-latitude skies… 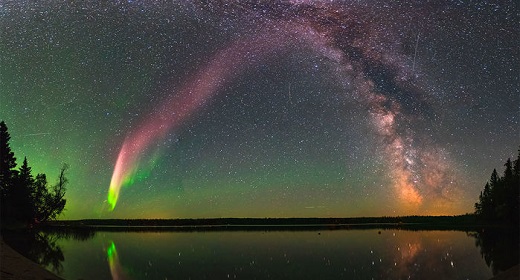 have a lower-latitude cousin named Strong Thermal Emission Velocity Enhancement (STEVE). But this dazzling purple-and-white ribbon in the sky, recently discovered by citizen scientists, is in fact an entirely new celestial phenomenon, researchers report in a new study.

To see whether STEVE fit the definition of an aurora, researchers analyzed observations of the skyglow in eastern Canada from March 2008. They used data from an array of all-sky cameras and a satellite that measures charged particles. If STEVE was formed in the same way as a traditional aurora, the researchers hypothesized, the satellite data should record an uptick in the number of charged particles—like electrons or ions—when STEVE was visible.

That’s because aurorae are caused by charged particles hitting atoms and molecules in Earth’s atmosphere, causing them to glow. But there were only relatively small increases in the number of low-energy electrons and protons when STEVE was in the sky, the team reports this week in Geophysical Research Letters. This surprising result means that STEVE is a “clearly distinct” phenomenon formed by a different mechanism, the team writes. Scientists aren’t yet sure how STEVE’s characteristic light is created, but one theory is that low-energy protons may be heating the upper atmosphere, which may be contributing to the skyglow.