This Is Why Humans Don’t Have A Mating Season

by Laurie Dove: Most animals have a mating season, and it’s usually a time when food, sunlight and fertility are plentiful… 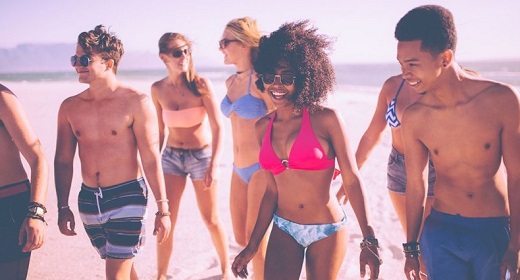 But what about humans? We don’t hibernate — Netflix and chill doesn’t count — and those with access to modern economies don’t have to wait for seasonal resources to put food on the table.

“Humans don’t have a true ‘mating season’ simply because sex is had throughout the year, rather than saving it for a specific time,” says author and professional matchmaker Dominique Clark. “People want to be together and desire connection most. So they seek relationship, but not because doing so during this season will produce offspring that can survive the harshest winter, but simply because the desire for intimacy and sex have increased.”

We’re part of a biologically classified group known as continuous breeders, which means that we mate or breed year-round. Seasonal breeders, like bears or chipmunks, have changes in fertility and sexual activity depending on the time of year. The females of these species experience an estrous cycle only during certain times, which introduces physiological and behavioral changes that lead to increased sexual activity. If conception doesn’t take place the endometrial lining in the uterus is reabsorbed.

Most women of childbearing age ovulate regularly and menstruate to shed the uterine lining if an egg is not fertilized, and do not require physiological processes to prompt sexual activity. However, people still share some of the same behaviors seen in other primates — even if we don’t recognize the vestigial cues.

“It is theorized that something that seems inadvertent, like a man at a bar pulling up his sleeve to make a nice watch visible to a female, is a way to indicate wealth and signal that he would be a good provider and mate,” says Chrissy Case, an anthrozoologist at Florida’s Beacon College. “While most other primates don’t own a Rolex, they can indicate wealth and the ability to support offspring through other ways.”

If a disease were to up its chance of spreading to another host through close contact, why don’t any diseases encourage human intimacy? STEVE PREZANT/GETTY IMAGES

The similarities in courtship patterns between humans and nonhuman primates stems from our shared social behavior ancestry, says Dr. Jacqueline Prime, founder of the environmental nonprofit Prime Earth and a wild gibbon researcher. “We are social creatures that rely on group members for our survival and reproductive success,” she says. “That means getting along with each other is of paramount importance. Touch and vocal communications help us solidify our bonds as individuals who get along with each other. Humans aren’t really different from any other non-human primate on this, we just have different styles and ways of doing things.”

Even with plenty of evidence to the contrary, the concept of a mating season may still be in play for humans, although few people would recognize it as such. Among the nomadic Turkana in northwest Kenya, more than half of all births occur in spring, from March to June. It’s a phenomenon experts attribute to the harsh environment, when an influx of food leads results in high conception rates.

In addition to nutritional peaks, humans’ hidden mating seasons may also be influenced by factors as varied as environmental and social factors. According to a study published in the Journal of Reproductive Rhythms, when the sun shines for about 12 hours a day and the temperature stays between 50 and 70 degrees Fahrenheit (10 and 21 degrees Celsius), women are more likely to ovulate, and men tend to produce more sperm.

And findings published in the Journal of Human Reproduction showed that married, educated women aged 25 to 34 in the Czech Republic have strong seasonal ties to reproduction, with most giving birth in the spring. Meanwhile, women in the study who were younger than 19 or older than 35, unmarried and with low education levels, were more likely to give birth at no particular time of year.

“Evolutionarily, sometimes we lose the full blown ‘need’ for something but retain it nonetheless,” says Dr. Anjhula Mya Bais, a relationship expert who specializes in social psychology. “For example, some scientists argue the small pinky toe is on its way out. True, humans have evolved over time in order to give birth year around — which is the ‘highest’ evolutionary purpose that sex would serve — however a disproportionate amount of people are born in summer, indicating when most people mate. Our tendencies may not be as obvious as other primates, but they exist on closer inspection.”