How New York City Is Leading the Way On Climate Change

by Penny Abeywardena: The majority of the world’s population are now living or migrating to urban areas… 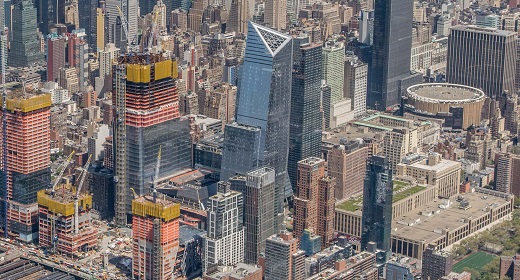 I don’t know about you, but I’m always looking to the future. Generally, I’m thinking about good things on the horizon — optimistically planning an adventure with friends or something as comforting and mundane as a family dinner at home. More and more, however, the future seems uncertain as we come to grips with the greatest threat to our future: climate change.

We’ve known for some time about the imminent threat of climate change and the dangers it poses for humanity: hunger, fewer livable places, overcrowding, and, at the core, a weakening versus thriving civilization. We are already experiencing unpredictable weather patterns, food insecurity, unforeseen changes in migration, and widening inequalities — all of which will be felt more acutely by future generations if we do not face into this phenomenon and take action now.

Global warming is a very real thing​: 2018 was the fourth warmest year on record and global hunger continues to rise. While our resources are being exploited, climate change will only make food scarcer and more expensive. Already more than 10% of the world’s population remains undernourished.

Moreover, the Amazon Rainforest is under the siege of raging wildfires because of the world’s beef consumption. While you may not live in the Amazon, and perhaps you’re a vegetarian, this news is alarming given that the rainforest, also known as “the planet’s lungs,” produces close to 20% of the world’s oxygen.

So, the choice could come down to consuming less meat today or less air tomorrow.

While this all sounds bleak, steps are being taken right here in New York City to change the picture. Yes, we are big and vast, but we are successful because of the leadership of Mayor Bill de Blasio and we are demonstrating how cities small or large can take action and unite in protecting and sustaining a world where everyone can all live and prosper.

For example, when our federal government, the United States, withdrew from the Paris climate agreement in June 2017, New York City didn’t sit back and do nothing. Instead, the very next day, recognizing the critical role that cities play in addressing climate change, Mayor de Blasio took action by signing an ​executive order committing NYC to the principles of the Paris agreement​, inspiring hundreds of cities around the country to do the same.

We were joined by US cities of all sizes and regions, and soon became the first city in the world to publish a Paris agreement-compliant plan in October 2017. The United Nations published the Sustainable Development Goals (SDGs) in 2016 as an urgent call to world leaders to take action toward ending hunger, protecting the planet, and ensuring prosperity for all. However, the United Nations recently ​reported​ that progress across sustainable development is in jeopardy with climate change being the most decisive threat to our entire civilization.

In 2018, New York City became the first city in the world to report to the United Nations on its progress toward the SDGs under a ​voluntary local review​​ (VLR). The move is part of our commitment to highlight our city’s sustainable development achievements since 2015, and we call on other cities around the world to not only adopt the SDGs but to also conduct a VLR.

The crucial point here is that, especially at this moment, city diplomacy and leadership are necessary to fill a void left by national governments. Cities are on the front lines of global challenges including climate change and migration, as some governments, including ours, retreat from global agreements and cooperation.

As one of the largest and most diverse cities in the world, it is imperative that we the leaders in the City of New York listen to the people who live here to address hunger, gender equity, clean water, and sanitation. Making a real difference starts with cities that are home to the people most intensely affected.

The majority of the world’s population are now living or migrating to urban areas, and that number is only expected to grow. For that reason, local communities and governments must have a voice and a place on the international stage to address critical issues such as climate change. That is where you, the Global Citizen, comes in.

Local elected officials and thought leaders must use their significant influence to shape the future we want to see. ​As a Global Citizen, I encourage and challenge you to call your local elected officials and tell them that you care about climate change and want your city to take action: adopt the UN Sustainable Development Goals, sign the declaration to join a Voluntary Local Review so that your city is openly benchmarking efforts toward a global commitment to not only save the world today but tomorrow’s world as well. ​

Tell them that you’re thinking about the future and maybe planning to visit the Amazon one day, but you’re afraid you won’t have a chance because we didn’t do something when we had the chance. The 2019 Global Citizen Festival in New York will be presented by Citi and Cisco and in association with our Production Partner, Live Nation. MSNBC, Comcast NBCUniversal, and iHeart will serve as Presenting Media Partners and will air a live simulcast of the Festival on MSNBC and on iHeart Radio Stations.