How To Encourage Girls To Lift Each Other Up, Instead of Tearing Each Other Down 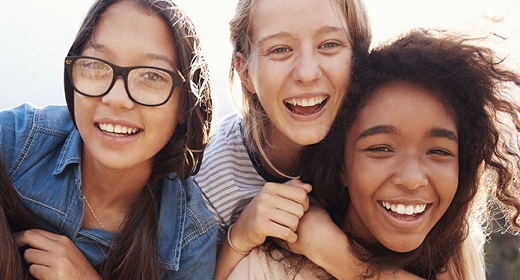 In fact, Caroline Adams Miller, a positive psychology expert and the author of Getting Grit, says that when she asks female professionals if they feel like one of the biggest challenges they face isn’t just how they are treated by men but also getting torn down by other women, “It’s not half the room raising their hands — it’s 100 percent of the women.” When girls are empowered and confident, however, they can learn how to team up in ways that encourage and support one another, making it more likely that all of them will find success! Phyllis Fagell, a professional school counselor, spoke with a variety of experts for a recent Washington Post article to find out why girls are prone to see one another as competition — and how parents can encourage them to build empowering friendships that lift each other up instead.

Part of the reason girls are prone to compete is that they worry about losing out on opportunities: “scarcity theory might lead young girls to believe that there are limits around how many good things can happen to any one person,” Miller says, “which could also lead them to believe that their own success will be limited.” A recent survey by Plan International USA showed that 30% of teenage girls felt they had fewer opportunities at school than boys do, particularly when it comes to sports and leadership opportunities. That means that girls may conclude that losing one chance to another girl means they’ll never get another one, says business leader and pro basketball pioneer Donna Orender: “Unfortunately, it’s been communicated to us over the years that there are fewer spots for women — a limited inventory.”

So what can parents and educators do to help girls understand that it’s not a zero-sum game? An important first step is helping to grow her own confidence, which tends to drop significantly in girls as they reach the tween years, since confident girls are more likely to see one another as allies rather than threats. One way to do this is by encouraging girls to use expansive body language, says Amy Cuddy, a social psychologist and author of Presence: Bringing Your Boldest Self to Your Biggest Challenges, since she observes that girls often start showing “shrinking behavior,” where they try to take up less space, around middle school.

Cuddy explains that feeling “powerlessness can be really dangerous and make it hard to know who to trust.” While on the flip side, “feeling powerful activates what we call the behavioral approach system and makes us more optimistic, generally happier, and more confident and willing to take risks.” So when you see her slumping, slouching, or otherwise avoiding taking up space, ask her, “How do you feel when you’re ­sitting like that?” Showing girls images of confident girls and women standing with strength can also help reinforce this message. When Cuddy went to see the Fearless Girl sculpture, which depicts a girl standing with her feet apart, with her hands on her hips, boldly starting down the Wall Street Bull, for example, she says, “there were probably 60 girls there. That’s what they want to see, and what we need to be showing them.”

It’s also important that parents teach their kids to value personal mastery and improvement over their performance relative to others. For example, if she’s a runner, instead of asking herself if she ran further or faster than others, she can ask herself if she ran further or faster than she did yesterday. “You can be competitive without thriving on doing better than someone else,” Allie Riley, the senior vice president for Girls on the Run, reminds her runners. Moreover, encouraging girls to join a team — not necessarily a sports team, but any group with a shared goal — helps them learn how to invest in one another’s success and build each other up. “In theater, you have to make it about what’s best for the performance, and in a marching band, you have to trust that the person next to you won’t hit or step on you,” explains consultant Jon Gordon, the author of The Power of a Positive Team. “It’s all about being better for each other — no one achieves greatness in isolation.”

Of course, competition can also be beneficial to girls as well and help them build confidence and assertiveness, as long as she knows that there is a respectful way to do it. “We’ve been so militant about getting girls to be nice, they don’t even know there’s such a thing as healthy competition,” says Lisa Damour, psychologist and author of Untangled: Guiding Teenager Girls Through The Seven Transitions Into Adulthood. Encourage girls to do their best in competitive situations, but emphasize the importance of good sportsmanship and empathy throughout. As part of this, experts recommend introducing girls to fierce but kind female characters in media, such as those found in the many books and films found in A Mighty Girl’s extensive collection of girl-empowering resources.

Another way that girls can help lift one another up is by using social media for good. While surveys have found that many girls believe that society most values their physical appearance, and this is often taken to an extreme on social media, Miller encourages girls to change this dynamic by celebrating one another’s substantive achievements on social media. She suggests that girls write shout-outs and compliments to friends who have achieved a goal as a way to start a positive cycle of encouragement and shift social media exchanges away from a fixation on appearance.

This kind of positive relationship doesn’t have to be restricted to peers: Orender regularly pairs tweens and teens with older mentors, including women age 65 and up, to show them that everyone needs help sometimes — and that they can be the helpers as well as those in need. But when it happens among same-age girls, the result is truly astonishing. Ashley Eckstein, who has voiced empowering characters like Ahsoka Tano from the Star Wars universe, recalls being mocked for her success when she started performing professionally in the fifth grade, but this year, when she took her niece to a girls’ leadership summit, she saw a totally different dynamic. “The cheers, hugs and high-fives literally gave me goose bumps,” she recalls. “Something very right was happening in that room full of confident girls all doing their own thing.”