“Huipil” Is More Than Just A Blouse

Walk into the central park of Antigua, Guatemala, Uxibal’s hometown, and the first thing you’ll notice under the jacaranda trees… 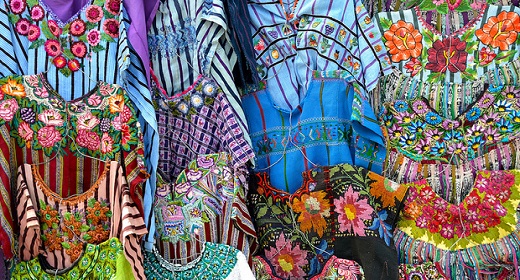 is the groups of Mayan women wearing traje, the traditional clothing of Guatemala. The hand-embroidered huipiles paired with long, beautifully woven cortes and cinched with an intricately embroidered faja are a riot of color and design. When you add in the cloth that most Mayan women also use to carry around their babies, anyone who loves textiles is basically in heaven.

But before we dive in, let’s back up for a minute and explain what all of those Spanish words up there mean. “Traje” literally translates to “suit” and, in this case, refers to the whole shebang: top, belt, bottom. “Faja” means girdle or sash and “corte” literally means “cut” but here refers to the skirts Mayan women wear. That’s all the Spanish I’ll force you to learn today – promise.

Today we’re going to focus on the “huipil” – which is pronounced “wee-peel.” The word actually comes from the Mayan language of Nahuatl and means “my covering.” Huipiles are elaborately embroidered tops that can take months to make and cost thousands of quetzales, the local currency.

Huipiles are created using a backstrap loom which, according to National Geographic, has been used by Mayan women for 1,200 years. While cortes are usually made by men using a foot loom, you’ll never see a man using a backstrap loom. That’s because the loom relies on a back and forth motion of the hips in order to create the correct tension on the threads. That swaying is considered to be a wholly female motion, associated with childbirth, making backstrap weaving a women-only activity. In fact, some Mayan legends even credit the moon goddess as the first backstrap weaver. 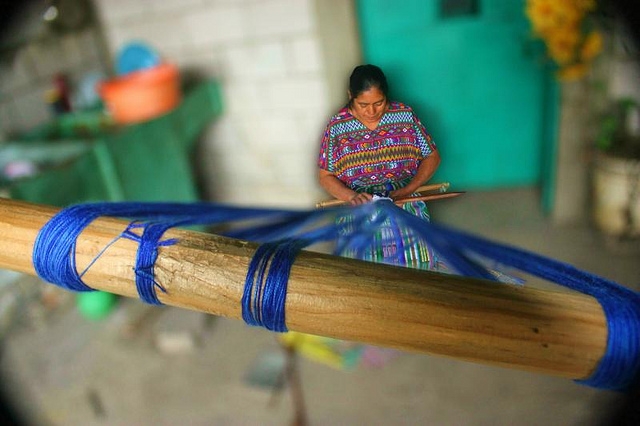 If you’re around Mayan women for long enough, you’ll start to notice some patterns. You’ll realize that the a few different women are rocking the same design on their huipil or they’re all wearing the same corte. Considering the fact that every piece is handmade, what’s that about? It’s not like they’re all going to H&M to grab the latest trends, so what’s with the similarities?

Well, the Spanish conquistadors can be credited with that one. Back in the day, the invaders wanted a way to keep track of the different Mayan groups. They ordered the women in each town to create trajes that were all in the same design in order to determine who was with who. Today, despite that icky association, different regions of Guatemala take pride in their regional design and being able to name where a woman’s huipil from is from is good way for a gringa to show she’s in the know.

In addition to where she’s from, a huipil can signal (to those in the know, that is) a lot of information about the woman wearing it. It can tell you something about her interests, her family, her marital status, her social status, her religion, and her beliefs. 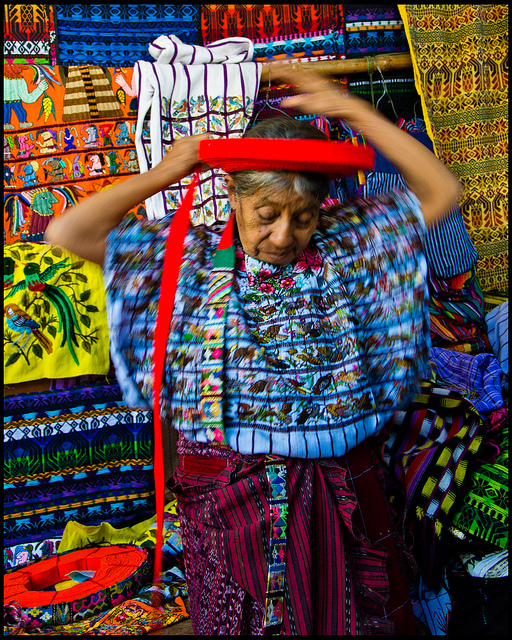 My favorite huipil that I’ve seen so far was on a woman carrying fruit on her head through the streets of Antigua. Her huipil was covered from shoulder to hem with brightly colored images of tiny fruits! I thought it was a beautiful, playful top that clearly communicated what that lady was all about.

Because they take so long to make, huipiles are considered very valuable and are often one of the most expensive items a Mayan family owns. Luckily, their construction means they can last for years, although some women will have a few different huipiles for different occasions.

And of course, here at Uxibal we’re all about celebrating handmade, beautiful, woman-produced art. The tradition of huipiles is just one of the many reasons our founder, Britini, decided to start Uxibal here in Guatemala and we’re so excited that we get to share it with you! Keep checking back in for more explanations of how Guatemalan products are made and the stories behind them.