by Nick Visser: Climate change remains the greatest threat to the Australian natural treasure, and things are not looking good… 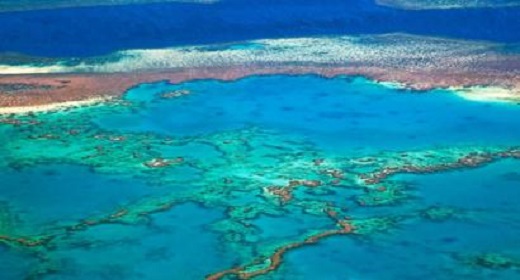 The outlook for the iconic Great Barrier Reef was downgraded from “poor” to “very poor” on Friday as the bastion of coral struggles to survive ongoing threats from climate change, the Australian federal agency that oversees the reef said in shocking new findings.

The report, published every five years by the Great Barrier Reef Marine Park Authority, is the first time the government has listed the long-term prospects of the reef so bleakly. The findings directly point to runaway climate change spurred by greenhouse gas emissions as the prime threat to the structure, noting that the time to protect the reef’s “long-term future is now.”

“Climate change is escalating and is the most significant threat to the region’s long-term outlook,” the authority said. “Significant global action to address climate change is critical to slowing deterioration of the reef’s ecosystem and heritage values and supporting recovery. … The significant and large-scale impacts from record-breaking sea surface temperatures have resulted in coral reef habitat transitioning from poor to very poor condition.”

The paper is the third released by the country, and the authority has been tracking the reef’s troubles since 2009. Aside from climate change, the report points to other issues facing the reef, including outbreaks of crown-of-thorns starfish and poor water quality linked to farming runoff.

But scientists have long argued that the greatest threat to the reef lies in our warming world.

The Great Barrier Reef has been struggling for years after a series of devastating, back-to-back bleaching events in 2016 and 2017 that left vast swaths of the reef damaged or dead. Scientists who visited the reef after those events likened them as an underwater apocalypse that left large stretches of the structure, the largest living thing on the planet, cooked to death.

Researchers issued some silver linings at the time, however, urging the world to take action to save the reef before it’s too late.

Friday’s findings prompted immediate concern from environmental groups who have long warned that federal action to address the decline of the reef hasn’t gone far enough.

“This is now the third Outlook Report. We’ve had 10 years of warnings, 10 years of rising greenhouse emissions and 10 years watching the Reef heading for a catastrophe,” Imogen Zethoven, director of strategy for the Australian Marine Conservation Society, a nonprofit conservation group, said in a statement. “We are seeing the results of government inaction on climate change. This latest report outlines the big threats from warming oceans and poor water quality. Nobody can say they were not warned.”

Sussan Ley, the country’s environment minister, responded to the report on Friday by touting the government’s initiatives to protect the reef. Australia has released a Reef 2050 Plan that focuses on efforts to save the Great Barrier over the next 30 years, but the proposal has been criticized for not going far enough to address climate change as the root cause of the reef’s woes.

“We have the best-managed reef ecosystem in the world,” Ley said in an editorial in The Sydney Morning Herald. “We have a massive job to do in protecting its future and we are getting on with that job. … I trust the scientists who tell me that climate change is the biggest single threat to the reef, just as I trust those who tell me of the things we can do, and are doing, to make the reef more resilient.”

Despite Ley’s assurances that the reef was “teeming with life” when she visited in recent weeks, the report Friday painted a bleak picture for the future of the reef should the government fail to enact its own policies, noting that without dramatic action, a part of Australia’s core identity could soon disappear.

“Without additional local, national and global action on the greatest threats, the overall outlook for the Great Barrier Reef’s ecosystem will remain very poor, with continuing consequences for its heritage values,” the report states. “The window of opportunity to improve the Reef’s long-term future is now.”