by Dave Roos: There he is, seated next to the cash register at your local Chinese restaurant… 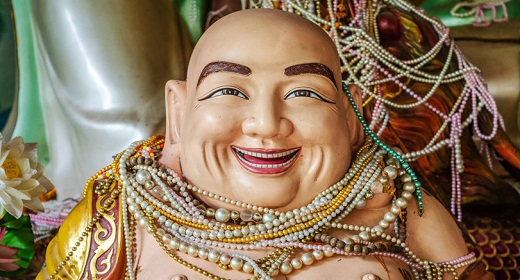 This portrait of a Budai was taken at a public shrine in Chiang Mai, Thailand. In Thailand, the ‘Laughing Monk’ is believed to represent a god of happiness and plenty.

A shiny bronze statue of a pot-bellied, bald man with a laughing grin on his face, the same jolly fella immortalized in keychains, paperweights and other trinkets sold in Chinatown tourist shops.

Nope, but you’re in the right religious ballpark. Westerners can be forgiven for mistaking the ubiquitous chubby figure as the Buddha, since he’s also called “the Laughing Buddha.” But the true story behind the Laughing Buddha is nearly as complicated as Buddhism itself.

Denise Leidy is curator of Asian art at the Yale University Art Gallery and held the same position at the Metropolitan Museum of Art for 22 years. She’s no stranger to the confusion over the Laughing Buddha statue.

“In Christianity, there’s this one guy. So when people see this corpulent, fun guy, they think, ‘That’s the Buddha,’ but it’s not,” says Leidy. “The Buddha, in the singular, is Siddhartha Gautama. But the Buddhist religion over time has become so complicated and has added multiple layers of deities, many of whom have multiple avatars. So it’s gotten mind-boggling complicated and only crazy people like myself spend their lives figuring it out.”

The Buddha, as Leidy mentioned, was a man named Siddhartha Gautama who lived around the 6th century B.C.E. in India. Born a wealthy prince, he chose to live as an ascetic in search of the meaning of existence, which he found while meditating for 49 days under the Bodhi tree.

This giant statue in Thailand of the Buddha shows a slimmer physique.
DAVID BUFFINGTON/GETTY IMAGES

After achieving nirvana, which is the escape from the endless cycle of suffering, death and rebirth, Siddhartha Gautama became Buddha or the “awakened one.” Over the centuries, his teachings spread throughout India, into China, across Asia and eventually around the world. Today, there are an estimated 376 million followersof Buddhism worldwide.

So, Who Is the Laughing Buddha?

As Leidy indicated, however, Buddhism has expanded over the millennia to include a pantheon of deities in addition to Gautama Buddha. Those include numerous bodhisattvas, the term for sagelike individuals who work for the enlightenment of all sentient beings. In Theravada Buddhism, practiced mainly in Southeast Asia, Gautama Buddha is only the most recent of 28 Buddhas described in holy texts. And then there are avatars, humans believed to be incarnations of deities.

The Laughing Buddha, it turns out, was one such avatar, a 10th-century Chinese monk named Budai. According to accounts written centuries later, Budai was a gregarious, pot-bellied monk who wandered from village to village carrying a large sack over his shoulder. (Budai means “cloth sack” in Chinese.) He was beloved by children and the poor, to whom he would give rice and sweets from his sack.

On his deathbed, Budai penned a poem in which he revealed himself as the avatar of Maitreya, a deity also known as the “Future Buddha.”

“In our lifetime, this great cosmic era you and I are sharing, there is a ‘teaching Buddha’ named Siddhartha Gautama or Shakyamuni,” explains Leidy. “The world will ultimately destroy itself; I don’t know when. But when the world is reborn, Maitreya will come back as the teaching Buddha of that era.”

Over time, Budai became a subject of popular devotion in Zen Buddhism, both in China and in Japan, where he goes by the name Hotei. His large belly and sack are believed to represent abundance, and he is included among the Seven Lucky Gods of Japan as a harbinger of abundance and good health. At some point, he also became the patron deity of restaurateurs and bartenders, hence his prized location next to the cash register.

Leidy isn’t sure of the exact historical provenance of today’s Laughing Buddha statues, but she believes that Bodai imagery in Chinese art and sculpture started popping up in the 15th century.

“As global trade begins to expand in late 16th and 17th century, and porcelain is totally transforming global ceramics, there’s probably some imagery of this guy that snuck in,” says Leidy. “It got picked up in the West, turned into the Laughing Buddha, and made into this kitschy thing you can buy anywhere.”

Although rubbing the Budai’s belly for good luck is not a Buddhist teaching, devotees of Buddhism don’t seem to have a problem with this chubby statue. “It is indicative of Buddhism’s broad tolerance of diversity that this laughing Buddha of folklore is accepted into the official practice,” writes Barbara O’Brien, a journalist and Zen Buddhism student. “For Buddhists, any quality that represents Buddha-nature is to be encouraged, and the folklore of the kind, laughing Buddha is not regarded as any kind of sacrilege, even though people unwittingly may confuse him with Shakyamuni Buddha.”