by Eoin Higgins: “Let’s get going!” 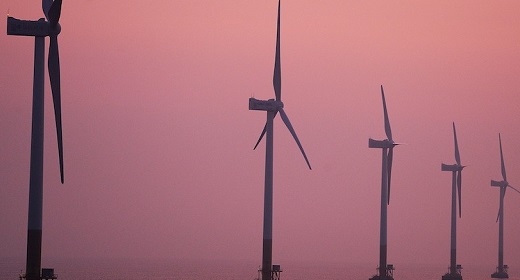 A new report from the International Energy Agency released Friday claims that wind power could be a $1 trillion business by 2040 and that the power provided by the green technology has the potential to outstrip global energy needs.

The IEA report looks at the business of wind power and opines that as investment increases and the technology becomes cheaper, the sector could explode.

The IEA finds that global offshore wind capacity may increase 15-fold and attract around $1 trillion of cumulative investment by 2040. This is driven by falling costs, supportive government policies and some remarkable technological progress, such as larger turbines and floating foundations. That’s just the start—the IEA report finds that offshore wind technology has the potential to grow far more strongly with stepped-up support from policy makers.

It would take a major infrastructural commitment to develop wind power to the point that the renewable energy resource could take over the majority of global energy needs, but it’s not impossible. As The Guardian pointed out Friday, “if windfarms were built across all useable sites which are no further than 60km (37 miles) off the coast, and where coastal waters are no deeper than 60 metres, they could generate 36,000 terawatt hours of renewable electricity a year.”

“This would easily meeting the current global demand for electricity of 23,000 terawatt hours,” added The Guardian.

Such a change in worldwide energy demand would require a massive investment of “public pressure, business leadership, and political leadership,” green group Friends of the Earth said on Twitter.

“Wind turbines in the shallow parts of the planet’s oceans can provide more electricity than the planet uses,” McKibben tweeted. “So let’s get going!”