by Daniel Oberhaus: After years of speculation and hype, the SpaceX CEO finally explains how Starship will carry humans to the moon and eventually to Mars… 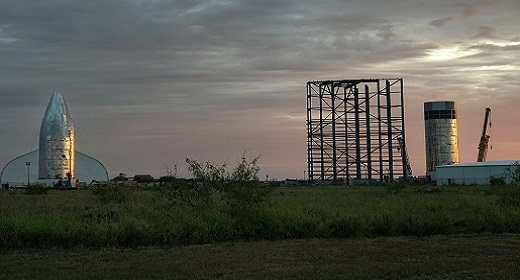 Elon Musk was visibly excited as he took the stage on Saturday night at SpaceX’s facility in Boca Chica, Texas. Behind him stood the hull of a gleaming, bullet-shaped rocket clad in stainless steel. It looked like something pulled straight from the pages of a pulp science fiction novel, but this is no fantasy. It’s Starship: the upper stage of SpaceX’s next-generation rocket that Musk hopes will soon carry humans to the moon and eventually to Mars.

Eleven years ago to the day, SpaceX sent the first private liquid-fueled rocket to orbit. As a nod to the company’s progress, Musk placed a Falcon 1 rocket onstage next to Starship. In the decade since Falcon 1 achieved orbit, SpaceX has pioneered self-landing rockets, launched a sports car into space, and is on the cusp of sending NASA astronauts to the International Space Station. Each achievement brought Musk closer to his ultimate goal of placing humans on Mars. Now he finally has a rocket that can take him there—and back again.

“The critical breakthrough that’s needed for us to become a spacefaring civilization is to make space travel like air travel,” Musk said. “A rapidly reusable rocket is basically the holy grail of space.”

The Starship prototype unveiled by Musk, known as Mark 1, is one of two identical rockets being assembled by SpaceX. The other rocket, Mark 2, is located at the SpaceX facility in Cape Canaveral, Florida, where the company does most of its launches. Musk said that the first flight of the Mark 1 Starship would occur in “one to two months.” It will launch from Texas on a suborbital trajectory that will reach a maximum altitude of 12 miles. Musk said that the first flight to orbit could be within 6 months of the first suborbital flight of Starship.

Starship is just one half of the rocket that will eventually boost humans to other worlds. In its final form, it will sit atop a Super Heavy rocket booster, which will be outfitted with up to 37 Raptor engines. The Raptor produces twice the thrust of the engines used on SpaceX’s Falcon 9 rockets and is among the most powerful rocket engines ever made. The orbital version of Starship will be outfitted with six Raptor engines, but the Mark 1 prototype will do its first suborbital flights with just three.

Even when it’s not atop a Super Heavy booster, Starship is a beast. The rocket is over 160 feet tall and weighs about 1,400 tons when loaded with fuel. Mounted on a fueled Super Heavy booster with a full-sized payload, the full stack will weigh in at about 10 million pounds. The Starship/Super Heavy combo will dethrone the NASA Saturn V rocket that carried Apollo astronauts to the moon as the largest and most powerful rocket ever made. In fact, Musk said, the Super Heavy will produce about twice the thrust of the Saturn V.

Starship is quite unlike anything that’s ever been sent to space. It’s a vehicle that Musk has described as a “strange” cross between a rocket booster, a crew capsule, and a skydiver. Like SpaceX’s other rockets, Starship will be capable of landing itself after it travels to space. But how it returns to Earth is quite different. Whereas the Falcon 9 and Falcon Heavy rocket boosters return to the launch pad at a nearly 90 degree angle, Starship will essentially belly flop through the atmosphere and right itself just before landing.

“This is quite a new approach to controlling a rocket,” Musk said. “It’s much more akin to a skydiver. It will look totally nuts to see that thing land.”

With the unveiling out of the way, it’s time for Starship to prove itself during flight. Over the summer, SpaceX conducted two test hops of its “Starhopper” vehicle, which is about a third the size of Starship and has only one Raptor engine. During the second test flight, Starhopper reached an altitude of nearly 500 feet, moved sideways a few yards, and landed. SpaceX has already filed for Starship flight clearance with the FAA and FCC. According to these documents, Starship’s first flight could occur as early as October 13 and reach an altitude of up to 14 miles—about a third of the way to space.

In the meantime, SpaceX will have to ramp up production of its Raptor engine. According to Musk, the company has already produced 12 engines, which is less than half of the minimum number needed to outfit a Super Heavy booster. In May, Musk said he expected the company to be producing a new Raptor engine every three days by the end of summer, but it’s unclear whether the company is close to this goal.

Although Starship has quite a bit of testing ahead of it before it’s ready to send humans to space, Musk has already sold seats on the spacecraft for a trip around the moon. Last September, Japanese billionaire Yusaku Maezawa announced he would ride Starship on a trip around the moon and bring a handful of artists along for the ride. At the time, Musk said that the flight could occur as early as 2023, but only “if everything goes 100 percent right.”

Musk has a habit of making big promises, and his vow to be the first to put humans on Mars always seemed like grandstanding. But after the Starship unveiling tonight, the Red Planet feels closer than ever.