by Neel V. Patel: The company’s LauncherOne system is designed to send satellites to low-Earth orbit. Does it really have the power to send a payload to the Red Planet? 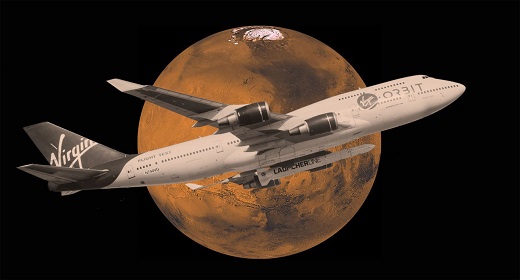 On Wednesday, Virgin Orbit, the satellite-focused spinoff of space tourism company Virgin Galactic, announced plans to launch three missions to Mars. The company has inked a partnership with Polish satellite company SatRevolution and groups from Polish universities to send three small robotic spacecraft to Mars for science investigations. The missions would be launched by Virgin Orbit’s flagship LauncherOne rocket and could start as early as 2022.

If it succeeds, Virgin Orbit will be the first commercial company to travel to the Red Planet. It will also mark an unexpected entrance into deep spaceflight for a company whose plans focus on air launches, which have always been considered unsuitable for traveling beyond low Earth orbit.

Virgin Orbit has yet to actually fly LauncherOne (it expects to do so later this year), but the plan is for a Boeing 747 called Cosmic Girl to carry the rocket to a high altitude and then release it. The rocket would fire its engines in midair and speed off into space. Air launches require less fuel and shielding than traditional rocket launches, and they can take place virtually anywhere, since they’re not restricted by a launch site or weather. But the airplanes struggle to take off with large rockets and large payloads.

Going into deep space with one of these air launch systems “is a pretty new idea,” says Glenn Lightsey, an aerospace engineer at Georgia Tech.

One of the main reasons such a trip is now feasible is that satellites are getting so small, he says. You can collect the same type of data and imagery you got a generation ago with instruments a fraction of the size. SatRevolution’s spacecraft will weigh no more than 110 pounds (50 kilograms), but it will be tasked with imaging Mars and its moon Phobos, studying the Martian atmosphere, and possibly surveying the land for signs of underground water.

Will Pomerantz, the vice president of special projects at Virgin Orbit, says many of the company’s customers, encouraged by NASA’s Artemis moon program, recently asked whether LauncherOne could be used to send small satellites to the moon. The company started to consider whether it could add an extra booster to the two-stage rocket to achieve the extra push needed to exit Earth’s orbit and send small payloads into deep space.

“We realized we actually do have something quite interesting to offer, and that there’s this other nice customer class for us to serve,” he says. Pomerantz won’t divulge specifics of how the third booster will be made, but options include solid rocket motors and liquid propulsion systems. Lightsey says an added electric propulsion system might also do the trick (although the weaker thrust means a longer journey to Mars, potentially exposing the payload’s electronics to harmful amounts of radiation).

“There’s no perfect solution, but there are different ways to solve the problem,” says Lightsey. “It’s possible.”

Even though the company still needs to prove it can make it to orbit at all, it’s already considering plans for missions to destinations like Venus, the moon, and nearby asteroids. Pomerantz is especially excited by what this could mean for opening up deep space to communities like Poland “that have long been interested in space, but have never been included in space.”

That doesn’t mean the industry will make a mass pivot to air launch systems. Lightsey says even the biggest airplanes with the biggest lift capacities currently offer little chance to move beyond small payloads like cubesats. There is perhaps, he says, some hope of using future air launches for tiny resupply missions, or to deliver small packages to crewed outposts and space stations.

“Through the growth in the commercial space industry, we’re seeing more and more options for how to get payloads into space and go to these challenging locations,” he says. “That’s really healthy for the industry. It’s all part of making spaceflight more affordable.”