by Kirsten Korosec: Waymo  transported 6,299 passengers in self-driving Chrysler Pacifica minivans in its first month participating in a robotaxi pilot program in California… 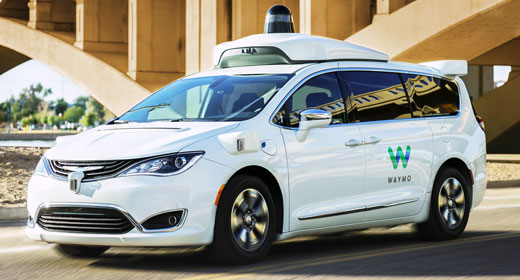 according to a quarterly report the company filed with the California Public Utilities Commission.

In all, the company completed 4,678 passenger trips in July — plus another 12 trips for educational purposes. It’s a noteworthy figure for an inaugural effort that pencils out to an average of 156 trips every day that month.  And it demonstrates that Waymo has the resources, staff and vehicles to operate a self-driving vehicle pilot while continuing to test its technology in multiple cities and ramp up its Waymo One ride-hailing service in Arizona.

But Waymo’s data — along with quarterly reports from three other companies that hold permits with the CPUC — provides just a hint at what demand could be for commercial autonomous vehicles and how these services might reshape cities.

Waymo’s pilot program, for instance, isn’t open to the public. Waymo or Alphabet employees and their guests can take rides within its geofenced South Bay territory, which currently includes Mountain View, Palo Alto, Sunnyvale, Cupertino, Los Altos and Los Altos Hills. This is only a few of the cities where Waymo is currently testing in California.

And because companies in this pilot program cannot charge for rides, it’s difficult to determine what the demand will be for self-driving passenger services, Dr. Susan Shaheen, co-director of the Transportation Sustainability Research Center at the University of California, noted in a recent interview.

Self-driving vehicles and the CPUC

The CPUC authorized in May 2018 two pilot programs for transporting passengers in autonomous vehicles.  The first one, called the Drivered Autonomous Vehicle Passenger Service Pilot program, allows companies to operate a ride-hailing service using autonomous vehicles as long as they follow specific rules. Companies are not allowed to charge for rides, a human safety driver must be behind the wheel and certain data must be reported quarterly.

The second CPUC pilot would allow driverless passenger service — although no company has yet to obtain that permit.

Only Waymo holds a driverless testing permit from the DMV, although it does not have driverless vehicles on public roads in California yet.

AutoX, Pony.ai, Zoox and Waymo have received permits to participate in the CPUC’s Drivered Autonomous Vehicle Passenger Service Pilot program. Zoox scored the first permit from the CPUC in December. Pony.ai and AutoX, which started as an autonomous delivery company, followed.

But Waymo, which received its permit on July 2  — two months into the second quarter — is already the leader, in terms of rides.

Pony.ai didn’t provide any rides in the last quarter, according to its CPUC report. Zoox’s report indicates that its 10 vehicles transported 134 passengers on 103 trips last quarter. The Zoox fleet traveled 352 miles during those trips.

Meanwhile, Waymo’s fleet completed 4,678 trips and logged 59,886 miles during the final month of the quarter.

As impressive as the numbers are, Shaheen and others in the industry wonder if the data being collected will help state regulators and companies determine the value and challenges of commercial autonomous vehicle services.

“Is this data they’re collecting actually helpful and how are they going to use it?” Shaheen asked.

Under the program, permit holders must submit anonymized data about each autonomous vehicle in operation. Waymo and other companies participating in the pilot have to provide total vehicle miles traveled during passenger service, as well as total miles in electric vehicles (if applicable) every quarter. Other data requirements for each quarter include miles traveled to the pickup point, idling time, vehicle occupancy and data about accessible rides.

The data is meant to help the CPUC develop a framework for full, permanent deployment of paid autonomous vehicles passenger service in California. And yet, the data might not fully capture what a commercial service might look like. For instance, Waymo’s total miles traveled from the vehicle’s starting location to a pickup point — a term known as deadhead miles — were 48,137 miles out of the total 59,916. Waymo notes in its report to the CPUC that it is continuously testing in between rides, implying that this could drive up the deadhead miles.

Autonomous vehicle companies have largely supported the CPUC’s two pilot programs. However, many companies, including Waymo as well as others such as Lyft and Cruise, which aren’t participating in the pilot, submitted written comments in 2018 arguing against some of the reporting requirements and in support of charging for rides.

Waymo has previously stated in public comments to the CPUC that tracking deadhead miles “would not appear to provide any valuable data” because the vehicles used for testing purposes will be vastly different and may not accurately reflect the efficiencies that can be gained through a more expansive fleet during full deployment.

Without the ability to charge for rides, companies are treating the pilot as another means to dial in their eventual commercial service.

AutoX is treating the pilot as one way to gain a better understanding of the consumer’s experience, including ordering and waiting for the ride, said Hugo Fozzati, AutoX’s director of business operations.

“Before we scale out and really deploy this, we want to make sure that we’re doing everything right,” Fozzati said.

Now, two questions remain: What will happen next and which agency will have the greatest influence in shaping future regulations? The CPUC and DMV are the most likely candidates, but the California Highway Patrol, which has historically been involved in some DMV rule-making, as well as the California Air Resources Board, could also play a role.