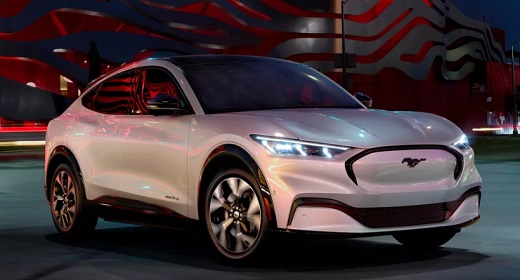 After a surprisingly brief teaser campaign, Ford’s electric SUV is here, and it carries a Mustang badge. The 2021 Ford Mustang Mach-E is the latest high-riding electron consumer, and it’s a doozy, promising some decent range, unique style and, in certain trims, some proper performance.

The Mach-E might be the first American EV SUV from a mass-market manufacturer, but competitors already exist. Its closest rivals are the Audi E-Tron and Jaguar I-Pace, both of which tout their dynamics. The Tesla Model Y would be a perfect competitor, too, but since that car doesn’t exist yet (and won’t for… well, that’s anybody’s guess), we’re dredging up the Model 3 as a point of comparison, given that 3 and Y will likely rely on much the same kit.

Of the four-car lines being compared, the Audi E-Tron is the biggest boy in the group, measuring 193 inches long, 76.3 inches wide and 65.5 inches tall. The Mach-E isn’t too far behind it, losing a few inches in all directions. The Jaguar I-Pace and Tesla Model 3, interestingly enough, share almost the same width.

This doesn’t apply to the wheelbase, though, where the Jaguar I-Pace happens to be the longest. The E-Tron’s wheelbase is actually the shortest of the three real SUVs being compared, with the Mach-E being less than an inch away from capturing that crown.

When it comes to cargo capacity, the Model 3 has the lowest amount of rear cargo space at 12 cubic feet, but that makes sense because it’s a sedan — the Model Y will undoubtedly be much more competitive. At 29 cubic feet, the Mach-E has more cargo space than both the E-Tron (28.5) and the I-Pace (25.3). Neither Audi nor Jaguar publish their front-trunk capacities, but the Mach-E has the Model 3 beat with 4.8 cubes of frunk space, compared to the Tesla’s 3.

The Mach-E promises some major variety across its trims, and that includes the powertrain. The Standard Range variants from Ford will pack a 75.7-kilowatt-hour battery, which produces an estimated range of 210 to 230 miles, depending on trim and whether it has one electric motor (for rear-wheel drive) or two (all-wheel drive). In Extended Range guise, the battery swells to 98.8 kWh, and the range estimate rises to 235 to 300 miles, again depending on trim and powertrain layout.

These are some impressive numbers, considering the E-Tron’s 95-kWh battery only gives it an EPA-estimated range of 204 miles. The Jaguar fares better, with its 90-kWh battery providing about 234 miles of range, but none of ’em hold a candle to the Tesla. The Model 3 Standard Range Plus uses just a 54-kWh battery, but its range is sufficiently high at 250 miles. Then there’s the Model 3 Performance, which has a 75-kWh battery that offers a range north of 300 miles. The Model 3 Long Range goes above and beyond that, even, although the Model Y’s larger dimensions will likely translate to slightly lower figures, as is the case between Model S and Model X.

It’s worth noting here that the EPA has not yet come back with its own estimations for the Mach-E, so those numbers are likely to fluctuate in the future.

Hit the road in the 2019 Audi E-Tron electric SUV

Here’s where things get interesting. The E-Tron, Mach-E (in Extended Range AWD guise) and the Model 3 Standard Range Plus are surprisingly close on paper, with all three variants offering 0-to-60-mph sprints in the mid-5-second range. The Model 3 obviously does it with the least amount of power, because it carries less mass than the SUVs do, but the E-Tron and Mach-E ER AWD have pretty similar outputs (until the E-Tron’s overboost function kicks in).

In the middle of the pack, the Jaguar I-Pace hangs out, ripping a 4.5-second sprint to 60 with 394 horsepower and 512 pound-feet of torque at its disposal.

At the upper echelon of performance lies the Mach-E GT Performance and Model 3 Performance. The Tesla’s nearly square (estimated) output of 473 hp and 471 lb-ft permits a 3.2-second run to 60, while the larger Mach-E requires about 459 hp and 612 lb-ft to reach the mid-3-second range. Either way, those are some pretty good numbers.

Tesla is the king of screens, with every Model 3 carrying a 15-inch touchscreen smack dab in the center of the dashboard. Without a gauge cluster, everything a driver needs is on that screen, from navigation to the speedometer. Thanks to a recent software update, the infotainment system now has both Spotify and Netflix integration, but smartphone mirroring has yet to make an appearance. When it comes time to charge, the Model 3 also carries four USB ports and two places to dock phones in the center console.

The Mach-E also has a massive screen on the dashboard, measuring 15.5 inches, but it retains a small gauge screen that contains driver-pertinent data. Ford’s next-gen infotainment can learn your routines and eventually do things like suggest routes or phone calls to make at specific points in time. Ford didn’t say if Apple CarPlay and Android Auto were included, but since those two integrations are part of Ford’s other infotainment offerings, I imagine they’ll be along for the ride here, too.

Both the E-Tron and I-Pace split up the tech a bit more. The Jaguar has a 10-inch infotainment touchscreen above a second, 5.5-inch touchscreen that focuses on climate controls and other creature-comfort functions. Audi’s MMI Touch Response system also has a two-screen layout, and it’s one of our favorite in-car tech systems. Both the Jag and the Audi carry Apple CarPlay and Android Auto, as well.

Finally, there’s the matter of price. While Ford has not yet finalized the Mach-E’s pricing, it’s believed that the starting price will lie somewhere in the $40,000 to $50,000 range, undercutting the I-Pace ($69,500) and E-Tron ($74,800) by a whole heck of a lot. The Model 3’s price is actually the closest, with the Standard Range Plus starting at $39,490, rising to $56,990 for the Performance variant, which is right around where the Mach-E GT Performance is expected to land. A potential Model Y price bump might actually hand the advantage to Ford, but we won’t know until Tesla decides to build the darn thing.