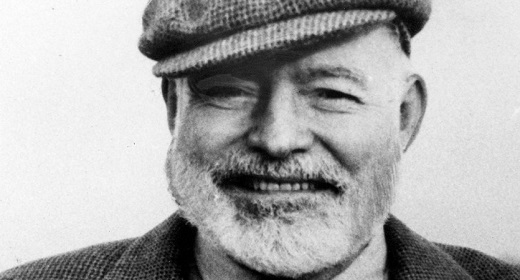 During World War I, Hemingway was wounded by shrapnel while fighting on the banks of the river Piave, near Fossalta, Italy.  He convalesced in Milan.  In a letter from there to his family, he made this cryptic statement: “Dying is a very simple thing.  I’ve looked at death and really I know.”  Years later, Hemingway explained to a friend what had occurred on that fateful night in 1918 (pages 23-24, paperback version, “BEYOND THE LIGHT”):

“A big Austrian trench mortar bomb, of the type that used to be called ash cans, exploded in the darkness.  I died then.  I felt my soul or something coming right out of my body, like you’d pull a silk handkerchief out of a pocket by one corner.  It flew around and then came back and went in again and I wasn’t dead anymore.”

Hemingway remained deeply affected by this out-of-body/initial near-death experience throughout his life, and was never again as “hard-boiled” as he once had been.  “A FAREWELL TO ARMS” contains a passage where the character Frederic Henry undergoes the same confrontation with death that Hemingway did:

“I ate the end of my piece of cheese and took a swallow of wine.  Through the other noise I heard a cough, then came the chuh-chuh-chuh-chuh – then there was a flash, as when a blast-furnace door is swung open, and a roar that started white and went red and on and on in a rushing wind.  I tried to breathe but my breath would not come and I felt myself rush bodily out of myself and out and out and out and all the time bodily in the wind.  I went out swiftly, all of myself, and I knew I was dead and that it had all been a mistake to think you just died.  Then I floated, and instead of going on I felt myself slide back.  I breathed and I was back.”