Flying Cars, Aerial Ridesharing, And The Not-Too-Distant Future Of Transport

by Peter H. Diamandis: In 2018, for the sixth straight year, Los Angeles earned the dubious honor of being the most gridlocked metropolis in the world… 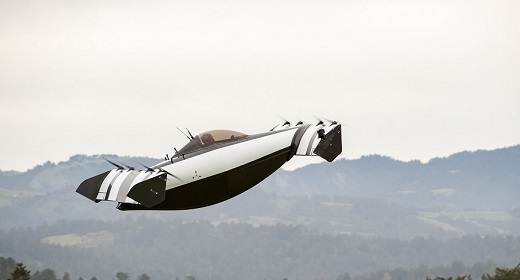 where the average driver spends 2.5 working weeks per year trapped in traffic.

And countless cities are close behind. For the average driver, dreams of being elevated above jammed freeways and flying—uninterrupted—to one’s destination seem well out of reach. Yet these visions will soon become realities.

The era of the internal combustion engine (ICE) car is ending. From here on out, it’s all about electric vehicles, autonomous ride-sharing, and flying fleets. The implications for society and the automotive industry are HUGE.

We may have reached “peak ICE” production this past year. Don’t believe me? Oil demand is predicted to peak as early as 2021, according to Bloomberg New Energy Finance, and some experts suggest it may have already peaked.

Speeding to first place in today’s transit race, electric vehicles are set to win by sheer economic advantage, fast becoming the foundation for autonomous ride-sharing fleets of the future. As that happens, it will soon become un-economical and socially unacceptable for you to hold onto that old gas-guzzling car.

Next, we will see electric vehicles migrating to the skies.

By mid-2018, over US$1 billion had been invested by startups, VCs and aerospace giants in at least twenty-five different flying car companies. A dozen vehicles are being test-flown, while another dozen are at stages ranging from PowerPoint to prototype.

Let’s explore the next era of transportation.

The Hardware is Here

Jeff Holden, Uber’s (former) Chief Product Officer, initiated the conference with quite a vision. “We’ve come to accept extreme congestion as part of our lives,” he said. “In the US, we have the honor of being home to 10 of the world’s 25 most congested cities, costing us approximately $300 billion in lost income and productivity.”

Aerial ridesharing might sound like a sci-fi cliché, but Holden has a solid track record of disruptive innovation. In the late 1990s, he followed Jeff Bezos from New York to Seattle and became one of the earliest employees at Amazon, where he spearheaded Amazon Prime. Next, Holden went to another disruptive startup, Groupon, and then on to Uber, where he’s strung together a series of wins: UberPool, UberEats and, most recently and radically, Uber’s self-driving car program.

So when Holden proposed an even zanier product line—that Uber take to the skies—what followed was no surprise: the company’s leadership, as well as everybody else, took him seriously.

And for good reason. The theme of the Uber Elevate Summit isn’t actually about flying cars. The cars are already here. Instead, the focus was the path to scale. And the more critical point: that path is a lot shorter than many suspect.

Larry Page, co-founder and CEO of Alphabet, was among the first to envision eVTOL potential, personally funding two companies, Zee-Arrow and Kittyhawk. Then there are established players like Boeing, Airbus, Embraer, and Bell Helicopter (now just called ‘Bell,’ a reference to the future disappearance of the helicopter itself), who are also in on the game.

Thus, for the first time in history, we’re past the point of talking about the possibility of flying cars. The cars are here.

“Uber’s goal,” according to Holden, “is to demonstrate flying car capability in 2020 and have aerial ridesharing fully operational in Dallas and LA by 2023.” He goes even further: “Ultimately, we want to make it economically irrational to own and use a car.”

How irrational? Let’s look at the numbers.

Today, the marginal cost of car ownership—that is, not the purchase price, but everything else that goes with a car: gas, repairs, insurance, parking, etc.—is 49 cents per passenger mile. For comparison, a helicopter, which has many more problems than just cost, covers a mile for about $8.93.

For their 2020 launch, UberAir wants to reduce that per mile price to $5.73, then rapidly drive it down to $1.84. But it’s Uber’s long-term target that’s the game-changer—44 cents per mile—or cheaper than the cost of driving.

And you get a lot per mile. The specs for Uber’s proposed service are impressive. Their main interest is in “electric vertical take-off and landing vehicles”—or eVTOLs for short.

For an eVTOL to qualify for Uber’s aerial ridesharing program, it must be able to carry one pilot and four passengers at a speed of over 150 mph for 3 continuous hours of operation.

While they envision 25 miles as their shortest flight (think Malibu to downtown Los Angeles), these requirements allow you to leap from northern San Diego to southern San Francisco in a single bound.

And Uber now boasts five partners who have committed to delivering eVTOLs that meet these specs, with another five or ten still to come.

But the vehicles alone don’t make car ownership irrational. So Uber has also partnered with NASA and the FAA to develop the air traffic management system to coordinate their flying fleet.

But beyond government players, Uber has additionally teamed up with architects, designers and real estate developers to create a string of “mega-skyports” needed for passengers to load and unload and for vehicles to take off and land.

To qualify as Uber-ready, a “mega-skyport” must be able to recharge vehicles, handle 1,000 take-offs and landings per hour (4,000 passengers) and occupy no more than three acres of land—which is small enough to sit atop old parking garages or the roofs of skyscrapers.

And according to Uber’s calculations, a network 40 skyports strong, positioned strategically around a city, should be able to clear a million passengers an hour.

Put all this together and by 2030, you’ll be able to order an on-demand aerial rideshare as easily as you do UberPool or UberEats. And if a century’s worth of transportation adoption rates are to be trusted, urban aviation could be a central mode of getting from A to B in the course of a mere decade.

But all of this raises a fundamental question: Why now? After dreaming up Blade Runner hover cars and Back to the Future DeLorean DMC-12s for centuries, how will we be able to accomplish this mission within the next decade?

There are over a hundred different patents on file in the US for “roadable aircraft.” A handful have flown. Most have not. None have delivered on the promise of the Jetsons.

In fact, our frustration at this lack of delivery has become a meme unto itself. At the turn of the last century, in a now famous IBM commercial, comedian Avery Johnson asked: “It’s the year 2000, but where are the flying cars? I was promised flying cars. I don’t see any flying cars. Why? Why? Why?”

In 2011, in Peter Thiel’s now famous manifesto, “What Happened to the Future,” the prominent investor echoed this concern, writing: “We wanted flying cars, instead we got 140 characters.”

Yet, as should be clear by now, the wait is over. The cars are here. And the infrastructure is coming fast. While we were sipping our lattes and checking our Instagram, science fiction became science fact.