Malawian Teen Taught Himself How To Build A Windmill From Junk, Brought Power To His Village!

Get this boy in a prominent position, make him famous, let him inspire! 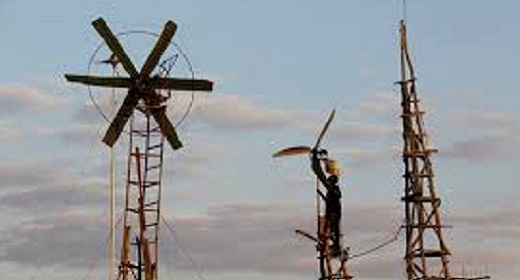 We are joining a call from Anonymous who posted a very simple message, they say the media is blacking out the importance of Malawian Teen William Kamkwamba. He taught himself how to build a windmill from junk, brought power to his village, learned from books he read in the library!

He was a simple farmer, he hadn’t seen a computer and certainly not many white people in his life. But his mind prevailed and his inventions made lives better. 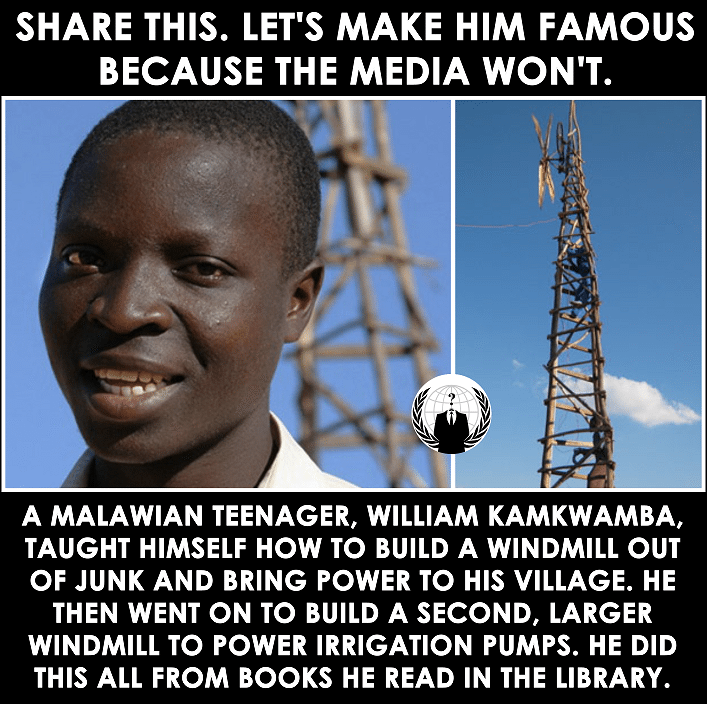 TED Wrote of him “At age 14, in poverty and famine, a Malawian boy built a windmill to power his family’s home. Now at 22, William Kamkwamba, who speaks at TED, here, for the second time, shares in his own words the moving tale of invention that changed his life.”

See his TED speech below, learn more about him and SPREAD THE WORD!

Here is what his site says about him…

William Kamkwamba was born August 5, 1987, in Dowa, Malawi, and grew up on his family farm in Masitala Village, Wimbe, two and half hours northeast of Malawi’s capital city. The second eldest of Trywell and Agnes Kamkwamba’s seven children, William has six sisters, Annie, Dorris, Rose, Aisha, Mayless, and Tiyamike.

William was educated at Wimbe Primary School, completing 8th grade and was then accepted to Kachokolo secondary school. Due to severe famine in 2001, his family lacked the funds to pay the $80 in annual school fees and William was forced to drop out of school a few months into his freshman year. For five years he was unable to go to school.

Starting at 14, rather than accept his fate, William started borrowing books from a small community lending library located at his former primary school. He borrowed an 8th-grade American textbook, Using Energy, which depicted wind turbines on its cover. He decided to build a windmill to power his family’s home and obviate the need for kerosene, which provided only smoky, flickering, distant and expensive light after dark. First, he built a prototype using a radio motor, then his initial 5-meter windmill out of a broken bicycle, tractor fan blade, old shock absorber, and blue gum trees. After hooking the windmill to a car battery for storage, William was able to power four light bulbs and charge neighbors’ mobile phones. This system was even equipped with homemade light switches and a circuit breaker made from nails, wire, and magnets. The windmill was later extended to 12 meters to better catch the wind above the trees. A third windmill pumped greywater for irrigation.

Subsequent projects have included clean water, malaria prevention, solar power and lighting for the six homes in his family compound; a deep water well with a solar-powered pump for clean water, a drip irrigation system, and the outfitting of the village team Wimbe United with their first-ever uniforms and shoes. Since receiving their sun and wind-themed uniforms, the team has been on a winning streak that has brought the village together with pride.

The windmill project drew many visitors from kilometers around, including Dr. Hartford Mchazime, Ph.D., the deputy director of the MTTA, the Malawian NGO responsible for the community library. Mchazime brought press, including The Malawi Daily Times, who wrote a long story. Soyapi Mumba and Mike McKay, engineers at Baobab Health Partnership in Malawi blogged about the article, and news of William’s inventions reached Emeka Okafor, program director for TEDGlobal, a prestigious gathering of thinkers and innovators. Okafor searched quite diligently to find William and invite him to the conference as a fellow. William’s presentation led to additional mentors, donors, and companies supporting his education and further projects.

William graduated from Dartmouth College in 2014 and started his tenure at Ideo.org as a Global Fellow. William’s time at Ideo focused on Human-Centered Design and sent him around the world working on projects ranging from sanitation in India to gender-based violence prevention in Kenya. He is now working with WiderNet to develop appropriate technology curriculum that will allow people to bridge the gap between “knowing” and “doing”. WiderNet will distribute the content through eGranaries around Malawi and across the continent.