The Indian Woman At The Coffee Shop – Donna Quesada

by Donna Quesada: What follows is an excerpt from a book that I have been compiling notes for, throughout the last few years. It chronicles many true stories of synchronicity and divine blessings…. 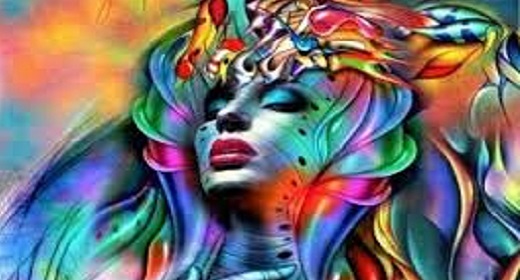 When I arrived at my local coffee shop, to write on the topic of prayer, I parked next to a car identical in year, make and color, to the car I had just before this one. I glanced through the windows and saw that it was loaded with clothing, as well as various and sundry random stuff, including a dog bed. It was this last item that moved me the most. It was as if someone was living out of the car, and they had a dog.

As I gathered my computer, and started toward the door of the coffee shop, I saw a thin thirty-something, Indian woman, walking near the parking lot with her senior dog. It touched my heart because the dog was arthritic. Then after a few moments, I saw them turn around and go toward the parking lot and toward the car that was identical to my old car — it was hers!

I paused for a moment, wondering about her situation. She left her dog in the car… it was a cool morning, so there was no problem with that. I could tell that she took good care of him, by the way she placed him in his little doggy bed, among all the other stuff, which was piled high all around him. And then she walked into the coffee shop before me.

I was moving slowly that morning, and ended up entering just as she was exiting. She asked me if I knew a lawyer. It was indeed, an unexpected, and out of the blue request, to be sure, especially, since we had not already spoken or been introduced in any way. She must have felt an openness about me. She then proceeded to give me the run down of her current life situation and challenges. She was in the middle of a difficult divorce and in transition, and without a stable place to live.

(As an aside, I couldn’t have known, that less than two years from then, I would also find myself in the middle of a stressful divorce.)

Through her rushed and frazzled words, I could sense her stress and fear and anger. And I could tell she had been crying. I told her that unfortunately, I knew of no lawyer. But I could feel her frazzled energy and I told her to breathe… and I breathed with her. And finally she stopped and breathed in a moment of calmness. It was likely her first calm moment in many days.

I told her to take her power back with that breath. And I told her that while she googled attorneys, I would pray for her. I gave her a hug, and after she apologized for being “gross” and un-showered, she went to drink her coffee outside, while I set up my laptop in my usual spot inside, by the window. I did pray for her, heartily… at that very moment, before ordering my usual bagel & tea.

Interesting that after going to this local coffee shop for 10 years, I never saw her there.

About a half hour later, I looked out the window and saw her engaged in a big conversation with a man, who I never saw before. This conversation went on for the next 45 minutes. As I was leaving, I stopped next to them, and said, “I see this man is helping you.” To which she said, with obvious relief and gladness in her tone, “yes!… it’s an incredible coincidence! He’s an attorney and he just happened to walk by and talk to me and he’s been giving me wonderful suggestions.”

She thanked me as I left, but I was thankful too. What really mattered was that she now felt that she had options and hope. A prayer had been answered… just like that.

I never saw either one of them again.