The Very Long And Fascinating History Of Tattoos

by Christopher McFadden: The history of tattoos is a very long and interesting one. But how are they made and who invented the tattoo gun? 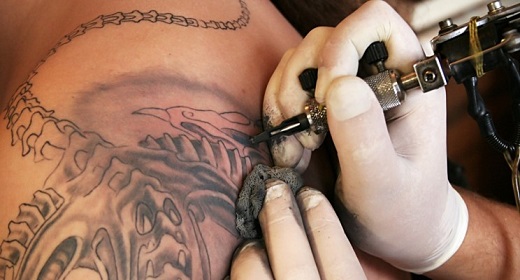 Tattoos are an art form that involves inserted pigment into the skin to change its color permanently. This practice is actually very ancient and might just be the very embodiment of self-expression.

In the following article, we will take a very brief tour of the history of tattoos and discover who invented the first tattoo machine or gun.

How long have tattoos existed?

According to historical records and archaeological sites, tattooing has been practiced by humans for a very long time. Tools that appear to have been crafted specifically for creating tattoos have been found in prehistoric sites around France, Portugal, and Scandinavia.

The oldest physical proof of tattoos has been found on an ancient mummy from the Alps, called Ötzi. This prehistoric human has been dated to around the 5th to 4th millennium BC.

It is also widely known that ancient Germanic and Celtic tribes widely practiced tattooing as a culture. Various ancient Egyptian mummies have also been found to have tattoos on them.

It is also believed that many ancient cultures, like in Egypt and India, used tattoos as a form of healing and religious worship. But it has also been speculated that tattoos were also used to denote social status or mark someone for punishment.

In ancient Egpyt tattoos appear to have been used to relieve painful health problems like chronic pelvic peritonitis (inflammation of the peritoneum).

In the Philippines, tattoos were also used as marks of rank and accomplishment and were also believed to endow the wearer with magical properties.

Ancient Greeks and Romans are also known to have tattooed their slaves and criminals so they could be easier to identify if they escape.

But all that changed in Europe at least, with the rise and mass adoption of Christianity under the Roman Empire. Tattoos were suddenly considered a barbaric practice and it slowly died out across the empire.

During the Age of Discovery and as transoceanic trade routes began to develop, the taboo around tattoos began to fade, albeit it very slowly, at first. Travelers like Sir Martin Frobisher, William Dampier, and Captain James Cook often brought home with them indigenous people from places they visited and they were often tattooed.

Tattoos began to become adopted by sailors and other members of the so-called “lower classes” but become more widely socially acceptable. As the art developed in Europe again, tattooing became a hobby of the aristocracy who had the means to pay for talented professionals.

But again this didn’t last. As tattooing prices started to fall, it was once again seen as the sole practice of the lower classes. It would retain this social stigma for many decades until the 1960s.

After this period, tattoos once again began to gain wider social acceptance and came to be seen as a form of self-expression.

Today, it has become so mainstream that even Mattel started selling Barbie dolls with tattoos. People of both sexes, of all economic classes, and of all ages wear tattoos if they want to.

How are tattoos created?

In order to do this, the tattoo artists need to use a variety of ink-laden needles to puncture the skin and inject a small amount of ink at that point.

This is done many thousands of times in order to complete an image, or text, on your skin. Whilst traditionally this would have been done by hand, modern-day tattoo artists use a special tool called a tattoo machine or gun.

As the needles penetrate the skin, ink is dragged down into the dermis and is left in place as the needle retracts. Modern-day needles tend to come in three forms, but tattoo artists can use up to 25 different tipped needles for their work.

Whilst tattoos were labor-intensive processes in the past, today they relatively quicker (depending on design). Modern-day tattoo machines are able to pierce the skin at between 50 and 3,000 times a minute.

Why do tattoos last forever?

The human dermis is composed of collagen fibers, nerves, glands, blood vessels, and other tissue. Some large ink particles are dispersed in the “gel-like matrix of the dermis,” and others will be gobbled up by fibroblasts, a type of dermal cell that plays an important part in healing wounds.

Once injected, your immune system inevitably responds to the many thousands of tiny wounds that the machine has created. Macrophages rush to the site and attempt to remove the pigment.

Some are successful but yet others are not and remain trapped in the dermis with the ink. Other cells in your dermis, called fibroblasts, also absorb the ink at the injection site.

These cells are not shed when the epidermis regenerates and will remain in the dermis until they die. Once they do die, the fibroblasts are absorbed (including the ink) into new fibroblasts which also helps tattoos last for a very long time.

Every new tattoo needs about two to four weeks to heal. As your immune system will constantly perceive the tattoo’s ink as a foreign body, it will continue to attack it for the rest of the owner’s life.

It is for this reason that whilst tattoos will last forever, they tend to fade gradually over time. Exposure to the sign will also do its part to fade the tattoo too.

As an aside, this is how laser tattoo removal works too. Lasers penetrate deep into your skin and break up the ink particles into smaller bits. This helps macrophages engulf and remove them more easily.

Who invented the tattoo machine?

The very first tattoo machine appeared in 1891. It was invented and patented by one Samuel O-Reilly, who was a highly accomplished tattoo-artist in his own right.

But the design of his machine was not all his own work. Samuel was inspired by an invention by none other than Thomas Edison from 1876.

Edison had attempted to popularise his “Electric Pen” to help businesses with document duplication. The pen used a high-speed reciprocating motor to drive a single needle to perforate a master form.

As the user wrote with the pen, the needle would extend and retract multiple times a second to trace the writers handwriting.

This form would then be used to make copies by rolling ink over the holes. Via this process, an exact copy could be made in short order, instead of the more laborious task of manually copying documents by hand.

Despite its ingenuity, the pen was never a hit and was destinated to be forgotten. That was until Samuel discovered the device and realized its potential for his industry.

He took the invention, added multiple needles and an ink reservoir. For his modifications, he was awarded his own U.S. patent for the world’s first tattoo machine.

Later in 1929, another inventor, Percy Waters, patented an improved version that closely resembles modern machines. His device user two electromagnetic coils that were set parallel with the frame, a spark shield and an on/off switch.

Waters, also a tattoo artist, went on to run a tattoo supply company for over thirty years. He produced classically noted flash sets and tattooed many well-known tattoo collectors during his time.