by Susan Cain: Ours is a loud culture of nonstop personal sharing, endless chatter, and 24-hour news, opinion, and entertainment… 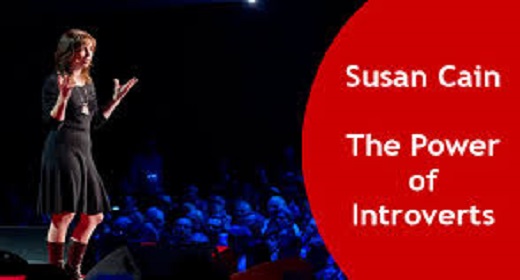 Even those people who prefer reading alone to the overstimulating carnival of social media feel pressured to participate. How else can you keep up with your family—whose Facebook posts you’d rather see die than have to read? How else to build a profile for employers—whom you desperately hope won’t check your Twitter feed?

For the introvert, maintaining an always-on façade can be profoundly enervating—and the problem goes far beyond the personal, argues author Susan Cain, reaching into every area of our lives.

“If you take a group of people and put them into a meeting,” says Cain in the short RSA video above, “the opinions of the loudest person, or the most charismatic person, or the most assertive person—those are the opinions that the group tends to follow.” This despite the fact that research shows “zero correlation” between being the loudest voice in the room and having the best ideas. Don’t we know this all too well.

Cain is the author of Quiet: The Power of Introverts in a World That Can’t Stop Talking, a book about leadership for introverts, the group least likely to want the social demands leadership requires. And yet, she argues, we nonetheless need introverts as leaders. “We’re living in a society now that is so overly extroverted,” she says. Cain identifies the phenomenon as a symptom of corporate capitalism overcoming predominantly agricultural ways of life. Aside from the significant question of whether we can change the culture without changing the economy, Cain makes a timely and compelling argument for a society that values different personality types equally.

But can there be a “world where it’s yin and yang” between introverts and extroverts? That depends, perhaps on how much credence we lend these well-worn Jungian categories, or whether we think of them as existing in binary opposition rather than on a spectrum, a circle, a hexagram, or whatever. Cain is not a psychologist but a former corporate lawyer who at least seems to believe the balancing act between extroverted and introverted can be achieved in the corporate world. She has given talks on “Networking for Introverts,” addressed the engineers at Google, and taken to the TED stage, the thought leader arena that accommodates all kinds of personalities, for better or worse.

Cain’s TED talk above may be one of the better ones. Opening with a moving and funny personal narrative, she walks us through the barrage of messages introverts receive condemning their desire for quietude as somehow perverse and selfish. Naturally solitary people are taught to think of their introversion as “a second-class personality trait,” Cain writes in her book, “somewhere between a disappointment and a pathology.” Introverts must swim against the tide to be themselves. “Our most important institutions,” she says above, “our schools and our workplaces, they are designed mostly for extroverts, and for extroverts’ need for stimulation.”

The bias is deep, reaching into the classrooms of young children, who are now forced to do most of their work by committee. But when introverts give in to the social pressure that forces them into awkward extroverted roles, the loss affects everyone. “At the risk of sounding grandiose,” Cain says, “when it comes to creativity and to leadership, we need introverts doing what they do best.” Paradoxically, that can look like introverts taking the helm, but out of a genuine sense of duty rather than a desire for the spotlight.

Introverted leaders are more likely to share power and give others space to express ideas, Cain argues. Gandhi, Eleanor Roosevelt, and Rosa Parks exemplify such introverted leadership, and a quieter, more balanced and thoughtful culture would produce more leaders like them. Maybe this is a proposition anyone can endorse, whether they prefer Friday nights with hot tea and a novel or in the crush and bustle of the crowds.