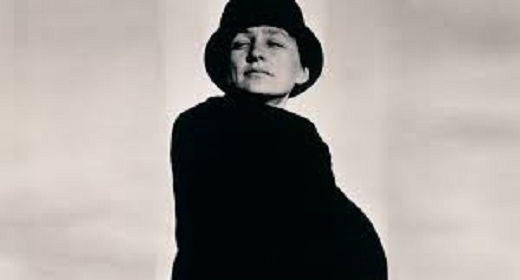 so much so that they often eclipse her other colorful accomplishments. For a more complete portrait of the artist, who was born on November 15, 1887, brush up on these 15 little-known facts about her.

1. FLOWER PAINTINGS MAKE UP A SMALL PERCENTAGE OF GEORGIA O’KEEFFE’S BODY OF WORK.

Though Georgia O’Keeffe is most famous for her lovingly rendered close-ups of flowers—like Black Iris and Oriental Poppies—these make up just about 200 of her 2000-plus paintings. The rest primarily depict landscapes, leaves, rocks, shells, and bones.

For decades, critics assumed that O’Keeffe’s flowers were intended as homages—or at the very least, allusions—to the female form. But in 1943, she insisted that they had it all wrong, saying, “Well—I made you take time to look at what I saw and when you took time to really notice my flowers you hung all your own associations with flowers on my flower and you write about my flower as if I think and see what you think and see of the flower—and I don’t.” So there.

3. GEORGIA O’KEEFFE WAS NOT A NATIVE OF THE AMERICAN SOUTHWEST. 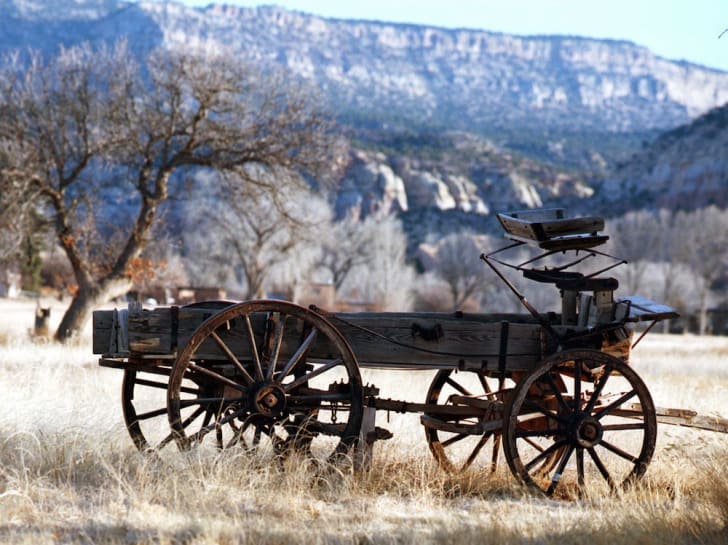 O’Keeffe was actually born on a Wisconsin dairy farm. She’d go on to live in Chicago; New York City; New York’s Lake George; Charlottesville, Virginia; and Amarillo, Texas. She first visited New Mexico in 1917, and as she grew older, her trips there became more and more frequent. Following the death of her husband in 1946, she moved to New Mexico permanently.

4. GEORGIA O’KEEFFE’S FAVORITE STUDIO WAS THE BACKSEAT OF A MODEL-A FORD.

In an interview with C-SPAN, Carolyn Kastner, former curator of the Georgia O’Keeffe Museum in Santa Fe, New Mexico, explained how the artist customized her car for this use: “She would remove the driver’s seat. Then she would unbolt the passenger car, turn it around to face the back seat. Then she would lay the canvas on the back seat as an easel and paint inside her Model-A Ford.”

Painting inside the car allowed O’Keeffe to stay out of the unrelenting desert sun, where she painted many of her later works. The Model-A also provided a barrier from the bees that would gather as the day wore on.

While nature was O’Keeffe’s main source of inspiration, the time she spent in 1920s Manhattan spurred the creation of surreal efforts like New York With Moon, City Night, and The Shelton with Sunspots.

6. GEORGIA O’KEEFFE IMMERSED HERSELF IN NATURE. 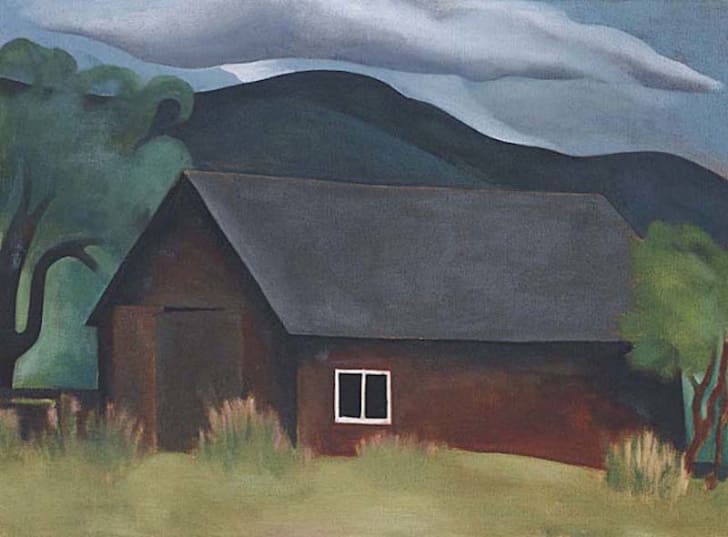 While in New Mexico, O’Keeffe spent summers and falls at her Ghost Ranch, putting up with the region’s hottest, most stifling days in order to capture its most vivid colors. (The rest of the year she stayed at her second home, located in the small town of Abiquiu.) When she wasn’t painting in her Model-A, O’Keeffe often camped out in the harsh surrounding terrain, to keep close to the landscapes that inspired her.

7. NOT EVEN BAD WEATHER COULD KEEP GEORGIA O’KEEFFE AWAY FROM HER WORK.

The artist would rig up tents from tarps, contend with unrelenting downpours, and paint with gloves on when it got too cold. She went camping well into her 70s and enjoyed a well-documented rafting trip with photographer Todd Webb at age 74. Her camping equipment is occasionally exhibited at the Georgia O’Keeffe Museum.

8. GEORGIA O’KEEFFE MARRIED THE MAN BEHIND HER FIRST GALLERY SHOW.

“At last, a woman on paper!” That’s what modernist photographer and gallery owner Alfred Stieglitz cried when he first saw O’Keeffe’s abstract charcoal drawings. He was so enthusiastic about this series of sketches that he put them on display—before consulting their creator.

When O’Keeffe arrived at his gallery, she wasn’t pleased, and brusquely introduced herself: “I am Georgia O’Keeffe and you will have to take these pictures down.” Despite their rocky beginnings, Stieglitz and O’Keeffe quickly made amends, and went on to become partners in art and in life.

9. GEORGIA O’KEEFFE AND ALFRED STIEGLITZ WROTE 25,000 PAGES OF LOVE LETTERS TO EACH OTHER. 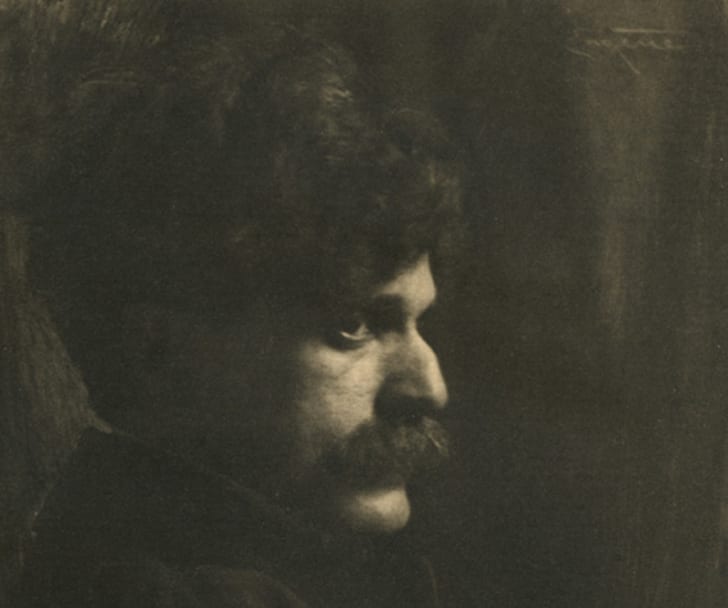 When the pair met in 1916, Stieglitz was famous and married; she was unknown and 23 years his junior. All the same, they began writing to each other often (sometimes two or three times a day) and at length (as many as 40 pages at a time). These preserved writings chart the progression of their romance—from flirtation to affair to their marriage in 1924—and even document their marital struggles.

10. GEORGIA O’KEEFFE SERVED AS A MUSE TO OTHER ARTISTS.

Thanks in part to Stieglitz, O’Keeffe was one of the most photographed women of the 20th century. Stieglitz made O’Keeffe the subject of a long-term series of portraits meant to capture individuals as they aged, and she made for a striking model. Though he died in 1946, the project lived on as other photographers sought out O’Keeffe in order to capture the beloved artist against the harsh New Mexican landscapes she loved so dearly.

“When I look over the photographs Stieglitz took of me—some of them more than 60 years ago—I wonder who that person is. It is as if in my one life I have lived many lives. If the person in the photographs were living in this world today, she would be quite a different person—but it doesn’t matter—Stieglitz photographed her then.”

The first break spanned several years (the exact number is a matter of debate), when O’Keeffe took on more stable jobs to help her family through financial troubles. In the early 1930s, a nervous breakdown led to her hospitalization, and caused her to set aside her brushes for more than a year.

In the years leading up to her death in 1986, failing eyesight forced O’Keeffe to give up painting entirely. Until then, she fought hard to keep working, enlisting assistants to prepare her canvas and mix her oil paints for pieces like 1977’s Sky Above Clouds/Yellow Horizon and Clouds. She managed to use watercolors until she was 95. 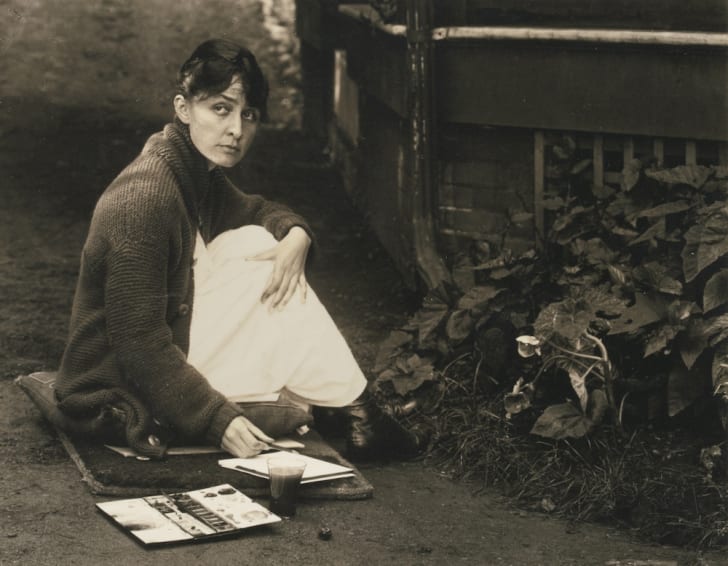 Although her vision eventually made painting impossible, O’Keeffe’s desire to create was not squelched. She memorably declared, “I can see what I want to paint. The thing that makes you want to create is still there.” O’Keeffe began experimenting with clay sculpting in her late 80s, and continued with it into her 96th year.

13. GEORGIA O’KEEFFE IS THE MOTHER OF AMERICAN MODERNISM.

Searching for what she called “the Great American Thing,” O’Keeffe was part of the Stieglitz Circle, which included such lauded early modernists as Charles Demuth, Arthur Dove, Marsden Hartley, John Marin, Paul Strand, and Edward Steichen. By the mid-1920s, she had become the first female painter to gain acclaim alongside her male contemporaries in New York’s cutthroat art world. Her distinctive way of rendering nature in shapes and forms that made them seem simultaneously familiar and new earned her a reputation as a pioneer of the form.

In 1946, O’Keeffe became the first woman to earn a retrospective at the Museum of Modern Art. Twenty-four years later, a Whitney Museum of American Art retrospective exhibit introduced her work to a new generation. Fifteen years after that, O’Keeffe was included in the inaugural slate of artists chosen to receive the newly founded National Medal of Arts for her contribution to American culture. 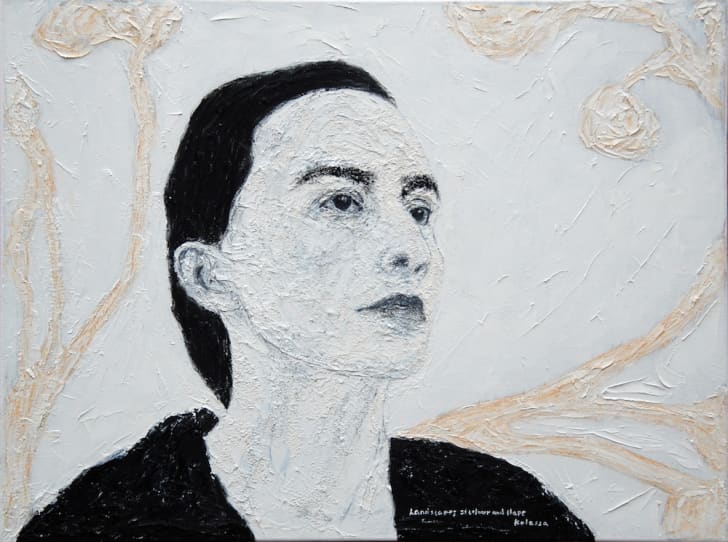 O’Keeffe was purported to have said, “I’ve been absolutely terrified every moment of my life and I’ve never let it keep me from doing a single thing I wanted to do.”