by Robinson Myer: In a massive new report, federal scientists contradict President Trump and assert that climate change is an intensifying danger to the United States… 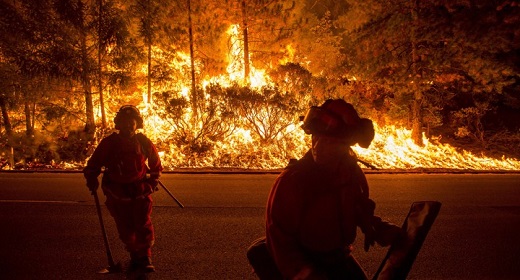 Firefighters battling the King Fire watch as a backfire burns along-awaken Highway 50 in Fresh Pond, California September 16, 2014. The fire led officials to call on about 400 people to evacuate from areas threatened by the blaze, Cal Fire spokeswoman Alyssa Smith said. It has charred more than 11,500 acres (4,654 hectares) and was 5 percent contained on Tuesday. REUTERS/Noah Berger (UNITED STATES – Tags: DISASTER ENVIRONMENT TPX IMAGES OF THE DAY) – GM1EA9H17MX01

Too bad it came out on a holiday.

On Friday, the busiest shopping day of the year, the federal government published a massive and dire new report on climate change. The report warns, repeatedly and directly, that climate change could soon imperil the American way of life, transforming every region of the country, imposing frustrating costs on the economy, and harming the health of virtually every citizen.

Most significantly, the National Climate Assessment—which is endorsed by nasa, noaa, the Department of Defense, and 10 other federal scientific agencies—contradicts nearly every position taken on the issue by President Donald Trump. Where the president has insisted that fighting global warming will harm the economy, the report responds: Climate change, if left unchecked, could eventually cost the economy hundreds of billions of dollars per year, and kill thousands of Americans to boot. Where the president has said that the climate will “probably” “change back,” the report replies: Many consequences of climate change will last for millennia, and some (such as the extinction of plant and animal species) will be permanent.

The report is a huge achievement for American science. It represents cumulative decades of work from more than 300 authors. Since 2015, scientists from across the U.S. government, state universities, and businesses have read thousands of studies, summarizing and collating them into this document. By law, a National Climate Assessment like this must be published every four years.

It may seem like a funny report to dump on the public on Black Friday, when most Americans care more about recovering from Thanksgiving dinner than they do about adapting to the grave conclusions of climate science. Indeed, who ordered the report to come out today?

It’s a good question with no obvious answer.

The report is blunt: Climate change is happening now, and humans are causing it. “Earth’s climate is now changing faster than at any point in the history of modern civilization, primarily as a result of human activities,” declares its first sentence. “The assumption that current and future climate conditions will resemble the recent past is no longer valid.”

Now, the sea is lifting above its shore, the harvest is faltering, and the seasons arrive and depart in disorder.

The report tells this story, laying simple fact on simple fact so as to build a terrible edifice. Since 1901, the United States has warmed 1.8 degrees Fahrenheit. Heat waves now arrive earlier in the year and abate later than they did in the 1960s. Mountain snowpack in the West has shrunk dramatically in the past half century. Sixteen of the warmest 17 years on record have occurred since 2000.

This trend “can only be explained by the effects that human activities, especially emissions of greenhouse gases, have had on the climate,” the report says. It warns that if humans wish to avoid 3.6 degrees of warming, they must dramatically cut this kind of pollution by 2040. On the other hand, if greenhouse-gas emissions continue to rise, then the Earth could warm by as much as 9 degrees by 2100.

“It shows us that climate change is not a distant issue. It’s not about plants, or animals, or a future generation. It’s about us, living now,” says Katharine Hayhoe, an author of the report and an atmospheric scientist at Texas Tech University.

The report visits each region of the country, describing the local upheavals wrought by a global transformation. Across the Southeast, massive wildfires—like those seen now in California—could soon become a regular occurrence, smothering Atlanta and other cities in toxic smog, it warns. In New England and the mid-Atlantic, it says, oceanfront barrier islands could erode and narrow. And in the Midwest, it forecasts plunging yields of corn, soybeans, wheat, and rice.

Its projections of sea-level rise are just as ominous. If carbon pollution continues to rise, a huge swath of the Atlantic coast—from North Carolina to Maine—will see sea-level rise of five feet by 2100. New Orleans, Houston, and the Gulf Coast could also face five feet of rising seas. Even Los Angeles and San Francisco could see the Pacific Ocean rise by three feet.

Even if humanity were to reduce the burning of fossil fuels, the report forecasts that New Orleans could still see five feet of sea-level rise by 2100.

Andrew Light, another author of the report and a senior fellow at the World Resources Institute, said that although the report cannot make policy recommendations, it might be read as an endorsement of the Paris Agreement on climate change.

“If the United States were to try and achieve the targets in the Paris Agreement, then things will be bad, but we can manage,” he said. “But if we don’t meet them, then we’re talking about hundreds of thousands of lives every year that are at risk because of climate change. And hundreds of billions of dollars.”

If you think the Friday after Thanksgiving seems like an odd day to publish such a major report, you’re right. The assessment was originally scheduled to be released in December at a large scientific conference in Washington, D.C. But earlier this week, officials announced that the report would come out two weeks early, on the afternoon of Black Friday. When politically inconvenient news is published in the final hours of a workweek, politicos call it a “Friday news dump.” Publishing a dire climate report in the final hours of Black Friday might be the biggest Friday news dump of them all.

So who ordered such a dump? During a press conference on Friday, the report’s directors in the government repeatedly declined to say. “It’s out earlier than expected,” said Monica Allen, a spokeswoman for noaa. “This report has not been altered or revised in any way to reflect political considerations.”

Yet the change in scheduling took the report’s authors by surprise. John Bruno, an author of the report and a coral biologist at the University of North Carolina, told me that he only learned last Friday that the report would be released today. “There was no explanation or justification,” he said. “The [assessment] leadership implied the timing was being dictated by another entity, but did not say who that was.”

Hayhoe told me she only learned on Tuesday that the report would be released on Friday. At the time, she was preparing three pies for a family Thanksgiving. She put the pies aside and picked up her laptop  to submit any final revisions to the document.

But a White House spokeswoman did send me a lengthy statement saying that “the United States leads the world in providing affordable, abundant, and secure energy to our citizens, while also leading the world in reducing carbon-dioxide emissions.” (This is only true if you start counting in 2005, when U.S. emissions peaked.) The spokeswoman said this new assessment was based on the “most-extreme scenario,” and promised any future report would have a “more transparent and data-driven process.”

Not that Hayhoe ever had high expectations about President Trump’s reaction to the report. “It wasn’t the hope that the federal government would look at it and go, ‘Oh my goodness! I see the light,’” she told me.