Are Nightshades Safe? Are They Healthy? – Ocean Robbins

by Ocean Robbins: What are nightshade vegetables, and do they cause inflammation or other adverse health effects? 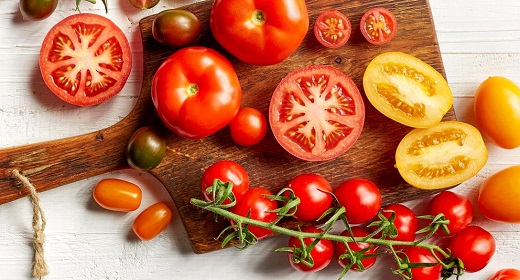 Should you avoid them in your diet? This article wades into the controversies to discover the truth about this much-debated plant family.

They may sound like sunglasses you wear after dark, but nightshades aren’t the subject of an 80s pop song. Instead, nightshades are a family of plants, many of which are staples in human diets around the world.

Despite this, nightshades generate lots of controversy. Look online, and you’ll discover one camp that touts their tremendous health benefits and find another that claims they promote inflammation, are high in dangerous anti-nutrients, and may be damaging to your health. So what’s the truth? Can science separate fact from fiction?

Nightshades belong to a scientific family of plants called Solanaceae, which includes thousands of species of fruits, vegetables, herbs, shrubs, and weeds.

Nightshades are unique in that they all grow five petal flowers and alternate leaves that grow in a staggered fashion on the stems. Only a handful of nightshades are actually safe to eat, and you’re probably familiar with most of them already.

It’s possible that edible nightshades are a regular part of your diet. Some of the most popular types of nightshades include:

Some nightshades are poisonous and are therefore not a part of your (or anyone’s) diet, such as tobacco and the Belladonna plant (ominously and accurately known as deadly nightshade).

Like all whole plant foods, edible nightshades are great sources of nutrients such as vitamins, minerals, protein, and fiber.

Eggplants are rich in fiber, potassium, and vitamins B1, B6, and K. A 2019 study concluded that compounds in eggplant extracts could be protective against DNA damage and mutations that can lead to diseases like cancer. As for other diseases, eggplant contains antioxidants that appear to be cardioprotective, and has a type of  fiber that is particularly good for bowel regularity.

Tomatoes are an excellent source of biotin, potassium, iron, and zinc. They’re also one of the best sources of lycopene, an antioxidant that reduces inflammation as well as conditions related to oxidative stress. To enhance your absorption of lycopene from tomatoes, cook or stew them, and eat them with some healthy fat. Traditional cultures seem to have known this intuitively; witness classic Italian dishes that pair olives with stewed tomatoes, or Mexican cuisine that combines avocados and various tomato-based sauces and spreads.

A 2016 meta-analysis found that tomatoes may be protective against cancer, especially that of the prostate. This likely has something to do with their lycopene content, which has been shown to slow the progression of cancer and tumor cells. Tomatoes also appear to benefit heart health, by lowering both your LDL (“bad”) cholesterol and blood pressure among other cardioprotective effects.

Different colors of potatoes offer different health benefits, but they’re typically all good sources of fiber, potassium, vitamin C, and vitamin B6. Potatoes are an abundant source of resistant starch, which is good for digestion and may even play a role in preventing colon cancer. Their peels are also rich in nutrients important for bone health, like iron, phosphorus, calcium, magnesium, and zinc. Red and purple potatoes are a source of antioxidants, especially carotenoids, which have been widely researched for their protective effects against chronic diseases and inflammation. Purple and blue potatoes have been shown to reduce oxidative damage and inflammation.

Green, red, and yellow aren’t just for traffic lights. Peppers enjoy these colors too, along with orange and purple. And they’re a great source of vitamins A and C, potassium, and folic acid. They’re also high in antioxidants that can help prevent and perhaps even reverse a number of diseases, like heart disease and cancer.

Where Does the Controversy Come From?

Despite the many health benefits of incorporating nightshades into your diet, there’s also a fair amount of controversy in the health community about this group of plant foods.

One of the latest spokespeople for the “nightshades are dangerous” perspective is Dr. Stephen Gundry, the physician behind the “Gundry Way” eating plan. A quick Google search will unveil the many claims he has emphasized about nightshades being unhealthy and disastrous to your body, especially your digestive system.

According to Dr. Gundry, there are two main reasons to avoid nightshades: lectins and alkaloids. You may have heard of these being referred to as “anti-nutrients,” meaning that they may compete with nutrient absorption in the body.

Lectins are proteins found most densely in nightshade peels and edible seeds like cereal grains and legumes. Gundry claims that lectins are toxic and inflammatory and that they are resistant to your digestive enzymes, making them impossible to properly break down in the body. If you eat a lot of lectins, he says, you will experience major discomfort.

Alkaloids include solanine, nicotine, and capsaicin. Gundry claims that some people may not be able to digest these properly, and that they may cause inflammation and joint pain.

What Does the Science Actually Say About Nightshade Vegetables?

This all brings us to the most important question, then, which is what does the research actually say about these plant foods? Are lectins and alkaloids truly dangerous to your health? Should we all be avoiding tomatoes and potatoes from here on out? Let’s see what the research tells us.

Lectins are proteins present in many plants and concentrated in beans, whole grains, and certain fruits and vegetables. And excessive amounts of certain kinds of lectins can, indeed, be problematic. One of the lectins found in kidney beans, for example, called hemagglutinin, can make people sick if consumed raw.

I don’t know anyone who’s actually in the habit of eating raw kidney beans. But some people don’t cook them properly, and this can allow a small amount of dangerous lectins to remain. For all legumes, it’s best to cook them well (in a pressure cooker if you have one) until they are fork-tender. (Lectins aren’t a concern with canned beans because all canned beans are thoroughly pressure cooked.)

Some research seems to indicate that taking in large quantities of raw lectins could have negative health effects. But the truth is that lectins break down when processed or cooked, so the risk of adverse health effects arising from lectin-rich foods that aren’t eaten raw is really not considered a cause for concern.

As for alkaloids, these are in fact toxins that are dangerous to humans and animals when eaten in very large doses. In vegetables, the primary toxin is solanine, which is found in high levels in certain foliage, while some fruits contain trace amounts.

How much solanine would you have to eat for it to be risky? For the average adult, potentially life-threatening, toxic intakes would be around 400 mg. But since nightshade vegetables typically contain between two and 13 mg of solanine each, you would have to eat over 35 raw eggplants to pose any risk to your well-being. And I’m guessing that’s not on your menu tonight. Just to put your mind at ease, there are no recipes on this website that call for an entire shopping cart full of raw eggplants for a family of four!

As to Gundry’s claims that alkaloids cause joint pain and arthritis, there are no scientific studies to back up these claims, nor does the Arthritis Foundation agree.

That’s not to say that some nightshades can’t have excessive alkaloid content. Have you ever seen a potato that looks slightly green? This can happen due to light exposure and may show up in certain areas of the potato or in patches that you can typically see on the skin. Potatoes that have turned green for this reason should be avoided, as they contain high levels of the glycoalkaloids chaconine and solanine, which can be dangerous for humans to eat. The concentration of solanine in green or blighted potatoes has been shown to increase sevenfold. Studies have found that doses of glycoalkaloids as low as 1-5 mg per kilogram of human body weight can be acutely toxic. But unless you eat green potatoes, this is unlikely to present a cause for concern.

Who (if Anyone) Should Avoid Nightshades?

Although nightshades don’t exactly seem to be life-threatening (and, in fact, are mighty healthy) for most people, there are some people who may want to steer clear of them.

For instance, if you have a food allergy or sensitivity to specific nightshades, you’ll want to limit or avoid these in your diet. There are some anecdotal reports from people claiming that when they no longer eat nightshades, they stop experiencing painful inflammatory symptoms. It is possible that some of these people have an allergy of some kind. And there are known to be rare cases in which people have an acute allergic reaction to a nightshade (or to almost any food, for that matter), like an allergy to tomatoes. If that’s the case for you, then, by all means, steer clear!

People with inflammatory bowel diseases like Crohn’s disease or ulcerative colitis may also find that they do better when they avoid nightshades. Some of these conditions can cause intestinal permeability, and a number of test tube and animal studies have suggested that intestinal permeability can be negatively impacted by excessive intake of the alkaloids in potatoes, fiber in tomatoes, and capsaicin in peppers.

Although primarily anecdotal, some people with autoimmune diseases report feeling fewer symptoms when they eliminate nightshades from their diet. Whether it’s from the placebo effect or not, paying attention to how particular foods make you feel is always a wise approach.

How to Prepare Nightshade Vegetables

If there’s one thing that hardly anyone can dispute about nightshades, it’s that they’re delicious. Here are a few great ways to prepare them at home.

Ratatouille by A Clean Bake – This is a flavorful combination of vegetables, including nightshades like tomatoes and eggplant, which come together in an easy baked dish. Line the bottom of your baking dish with parchment paper and use vegetable broth in place of the oil if you want to make your version even cleaner.

Moroccan Eggplant and Tomato Stew by Minimalist Baker – This is a Moroccan-spiced stew that blends together chickpeas, tomatoes, eggplant, and spices. And, it’s easy to skip the oil if you prefer.

Ultimate Vegan Fajitas by Pass the Plants – Boasting citrus-infused chipotle marinated mushrooms and colorful bell peppers, these delicious veggies are just waiting to be wrapped up in a warm tortilla or two.

Should You Eat Nightshades?

If you’re generally a healthy person and can enjoy nightshades without any negative impacts, there’s no reason to eliminate them from your diet as long as you’re not eating 35 eggplants at a time, or a bunch of green potatoes. Nightshades, like potatoes, tomatoes, eggplant, and peppers are all plant foods that offer important nutrients and health benefits. Plus, they’re easy to prepare. On the other hand, if you’re not a fan of nightshades or you feel like you may be sensitive to them, there are plenty of other healthy and delicious vegetables to choose from.