Trying To Plant A Trillion Trees Won’t Solve Everything

by Adam Rogers: We’re not going to stop climate change with just seedlings and fancy agriculture. We also need to reduce emissions… 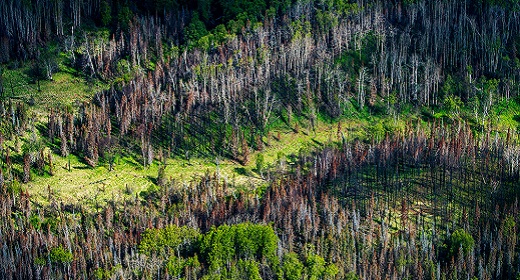 Only a monster would say no to this pitch: The best way to beat climate change—the warming of Earth caused by gases like carbon dioxide emitted by human industry, leading to rising sea levels, worsening fires and storms, drought, and disease—is simple. Plant a trillion trees. It’d be “one of the most effective carbon drawdowns to date,” said an article on the idea in the journal Science this past summer. And who doesn’t love trees, right?

Except the math turned out to be a little shady. Last month a bunch of climate scientists and ecologists piled onto that tree research in the same journal, calling out numerous errors in the first team’s calculations. At about the same time, a whole other bunch of ecologists started pushing back on the agriculture-tech startup Indigo for pitching a similar land-based carbon sequestration strategy, the “Terraton Initiative,” paying farmers to use new methods that could suck down a trillion metric tons (a teraton) of carbon. These goals are critical and the ideals are noble—who doesn’t want to stop climate change? Pretty much everyone except the US government agrees on that. It’s the numbers that are the problem.

Take the trees thing. The scientists who proposed it made careful maps of where trees grow today, all over the planet. They had a census of how many were there, combined with satellite data, all used to estimate how many potential trees could grow—and how much carbon those trees would slurp out of the atmosphere, a nontrivial calculation. There’s room for 0.9 billion hectares of new trees, they said—2.2 billion acres of tree cover, which draws down 205 metric gigatons of carbon, or 225 billion tons in US non-metric. That’s in line with the goal of keeping warming at or below 1.5 degrees, per the Intergovernmental Panel on Climate Change. World: saved!

But then the bills started coming due. The team forgot that 55 percent of all historically emitted carbon got absorbed by the oceans, not the land, and so underestimated the total amount of carbon by about one half. They overestimated carbon uptake by trees, and suggested putting trees where they’ve never been, or where they’d actually make the planet hotter (by darkening planetary albedo over icy, more reflective terrain). They didn’t take into account that the ecosystems where they wanted to plant trees already sequestered carbon. And so on. “We’re not talking about small errors here. We’re talking about a huge difference in the total amount of carbon you could sequester,” says Carla Staver, an ecologist at Yale University.

The lead scientist and the person who runs the lab that produced the initial paper didn’t respond to my requests for interviews, but in response to the criticisms in Science they wrote: “We intended to highlight that we are aware of no other viable climate change solution that is quantitatively as large in terms of carbon drawdown. We did not suggest that tree restoration should be considered as the unique solution to climate change.” They broadly stuck to their numbers, or said their critics had misinterpreted or misread them. But mostly, the implication was, hey, come on! We’re all in this together.

Which is true, as far as that goes. But if scientists get it wrong, the fight could fall apart—or become an easier target for climate deniers who already see conspiracies behind every scientific warning. “All of those technical responses were written by people who believe there is a place for forest restoration in mitigating climate change and emissions,” Staver says. “It behooves us as scientists to be realistic about how much that’s going to get us. We have to make good faith estimates.”

The same thing is happening with the Terraton Initiative. The company behind it, Indigo, is a startup trying to promulgate regenerative agriculture—methods like relying on perennials instead of annually replanted species, or cover crops to reduce the need for tilling. “We’re encouraging farmers to use less fertilizer, fewer chemicals, and data science and microbiology to improve yield, and get paid a premium for growing things more sustainably,” says David Perry, Indigo’s CEO. Terraton launched last June; sign up, and you get $15 for every ton of carbon sequestered, measured through regular tests of soil health. (Hey, wait, doesn’t that mean the startup would need to pony up $15 trillion? The cash, the company says, will come from Indigo’s venture money, and eventually from a carbon market that’ll sell offsets or use government subsidies, should such a thing ever exist.) Perry says they expected to have 3 million acres signed up in the first year, and instead they have 10 million acres in the first 100 days. World: saved!

Except, well, math. One 2017 study of 150,000 sample points all over Earth said that since the advent of agriculture, we’ve lost about 133 billion tons of carbon from the ground. Several analyses of carbon sequestration efforts estimate that with current limitations and in the best case scenario, we’ll only likely to recover about 50 or 60 percent of this lost carbon. “There’s a community of scientists who’ve been working on these issues for the better part of 20 years and who’ve published numerous papers showing what the soil potential of the planet would be, and Indigo chose to ignore those,” says Jonathan Foley, an environmental scientist and executive director of the climate change-fighting group Project Drawdown. “I just have to scratch my head and ask why they’re doing that.”

Indigo disagrees, of course. “His argument is based on two premises, neither of which we know to be true. The first is that you can accurately estimate how much carbon has been lost from the soil, and that’s really hard,” Perry says. “The second piece is, his premise is that you can’t put more carbon back into the soil than was there to begin with, and I think we can say with a lot of confidence that’s not true. There’s no reason to think that nature was looking to maximize carbon in the soil.”

It’s possible to imagine agriculture as a kind of geoengineering, of improving on nature’s yields and productivity. If it could also improve on nature’s ability to put carbon in the ground, that would be transformative. But there’s no evidence yet people can do it at a scale that it can by itself save the planet. Implying otherwise might even be its own kind of moral hazard, encouraging people to keep on coughing carbon into the atmosphere if they figure trees and cover crops will save us. Fixing climate change is going to take systematic, nation-scale work; these kind of solutions let countries and transnational corporations get away with business-as-usual.

“If a single company could offset a billion tons of CO2, they should win the Nobel Peace Prize. But a teraton? You’d need four planet Earths to do it,” Foley says. “It seems like a Silicon Valley hype cycle. Let’s overhype the numbers, overpromise, and then in five years it’ll crash.” That could erode confidence in the whole idea of fighting climate change, he says.

Using land as a carbon sink is a great idea. Even the land knows it; it already absorbs 30 percent of all carbon. A recent UN report said that for a mere $300 billion, Earth could return deforested or abandoned land to pasture and sequester enough carbon to stave off the worst effects of climate change for 20 years. That’s less than half the US’ annual defense budget, the cost of firing 300 WeWork CEOs. And reforestation and regenerative agriculture are great climate-fighting measures to sell to the developing world, because they actually help other problems rather than inhibit industrialization.

But they can’t be the only approaches. “A lot of us are worried and scared, and this is very appealing. But the reality is, there are no easy answers. The solution to these problems is going to involve tough choices, changes in lifestyle,” says Staver. “We can’t propose that changing the way we farm or planting a bunch of trees is going to get us to a solution without making systemic changes to the way we emit carbon as well.” The math is hard—but people can’t solve climate change without getting it right.