We Spoke To 5 Climate Experts About What Gives Them Hope

by Kyla Mandel: “I have a tenuous relationship with hope these days, but I am certainly bolstered by the fact that we already have all the solutions we need”… 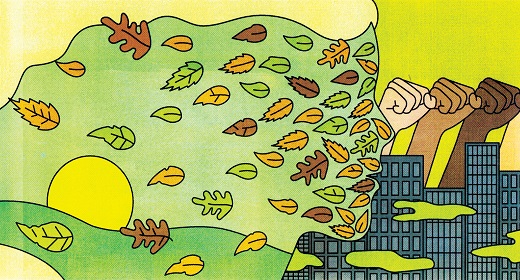 This year comes to a close after an onslaught of bleak and terrifying revelations about the state of our planet. Glaciers are melting, species are dying, forests are burning and climate tipping points ― thresholds which, if breached, will usher in uncontrollable warming ― are about to be crossed. The climate is clearly in crisis.

The world has just lived through what is expected to be the warmest decade ever recorded, and the United Nations recently warned that heat-trapping fossil fuel pollution must drop by more than 7% each year if there’s any chance of averting the worst effects. The scale of action required is unprecedented and daunting.

Confronted with this information, it’s easy to feel hopeless and anxious. This anxiety is so pervasive that in November psychologists from more than 40 countries signed a resolution acknowledging that climate-related events, like wildfires and flooding, can have major mental health effects and pledging to increase the availability of mental health services to help people cope.

But in the midst of all of this, momentum is building. Scientists are speaking out, children are protesting and politicians are drafting proposals. For the first time, climate change has been a leading election issue in the United States, and for more than a year now, youth climate activists around the world have been taking to the streets demanding change.

We spoke to experts on the front line, those who have dedicated their time to tackling the science and developing solutions, to better understand what they hope for ― and what gives them hope.

“Generally, I am hopeful. I do recognize that the data is disturbing. Honestly, I think for the most part, most of my hopeful energy comes from young people. I just think their understanding of the issue and the challenge is remarkable, and they’re embracing it.

“They’re making demands on people my age and younger who have treated this as if it was a routine issue, just a science discussion, just about the planet instead of understanding we are fundamentally looking at a challenge that could rob our young people of the opportunity to have a full and rich life.

“I also am hoping at the same time we don’t just rely on young people but we embrace their energy and we stay as active as humanly possible in addressing this issue. So, I’m glad about youth, it brings me hope, but it doesn’t mean I’m relinquishing my responsibility to them. I’m using them to remind me every day that it is my responsibility….

“If you’re a person my age and wonder what all the hullabaloo is about with young people, ask them at the dinner table. Ask them why they’re upset, why they’re worried, why they’re protesting, why they’re concerned that we’re not doing more. And maybe that will build bridges across generations that will have an impact on how well we all respond to the climate crisis.”

“I have a tenuous relationship with hope these days, but I am certainly bolstered by the fact that we already have all the solutions we need. From renewable energy, to replanting ecosystems, to regenerative farming, to retrofitting buildings, to electrifying transportation, to reducing waste — we don’t need to wait for new technologies, we just need to get to work. Plus, much of that doesn’t require the federal government, and there is so much beautiful and creative work happening at local levels just waiting to be replicated and spread.

“I’m also aglow about what I call the ‘feminist climate renaissance’ that we are witnessing. There have always been women leaders on climate issues, but they are now, finally, starting to get the resources and platforms they need to flourish. The youth climate movement is led primarily by girls and young women, and there are two older generations of women standing right beside them. The notable thing about these women leaders is how collaborative and generous they are. I’ve never seen anything like it in work or in a movement.

“As for 2020, I’m looking forward to having a new president, one who prioritizes climate action and puts us on a fast track to zero emissions. And my holiday wish is for every American to read the Green New Deal. The big secret is that it’s only 13 pages ― double-spaced and large font! So I hope you’ll cozy up with it this holiday season so that as a society we can all have an informed conversation about how to shape the policy changes we need to secure a livable climate.”

Marshall Shepherd, professor of geography and atmospheric sciences at the University of Georgia. International expert in weather and climate, and past president of the American Meteorological Society.

“I am most hopeful because, in spite of shortsighted actions like U.S. withdrawal from the Paris Agreement or the occasional climate trolling on social media, we are seeing a genuine ship-turning moment. There is significant discussion and action on climate change at local, state, national and international levels.

“Fortune 500 companies, faith-based communities and the military recognize the ‘here and now’ threat and are acting. There are genuine bipartisan efforts now in our Congress and within states. And scientists are finally starting to convey with the appropriate sense of urgency why climate change matters to people’s lives and kitchen table issues now rather than polar bears or time periods 80 years from now.”

Leah Stokes, assistant professor in the department of political science at the University of California, Santa Barbara. An expert in energy, climate and environmental politics.

“What makes me hopeful? There’s been a lot more focus on environmental justice in the past year, and that’s really important because black and brown communities have disproportionately borne the costs of the dirty energy status quo.

“I’m really excited to see fossil fuel companies starting to be held accountable for the three decades of climate denial that they funded…. Fossil fuel companies are kind of on their heels now. They’re no longer controlling the discourse like they did for many decades. They’re starting to face risk, their social license to operate is being eroded… .

“Obviously the youth climate movement is very exciting…. I believe that before impeachment kicked up, climate change was the No. 1 news story. And that’s really amazing. I think that speaks to the power of Greta Thunberg and Alexandria Ocasio Cortez, and the Sunrise Movement. They’ve been very successful at shifting the dialogue.

“And I feel like with the presidential candidates, we have an arms race for who can spend the most and decarbonize the economy fast enough and do it with the most equity. And that is unprecedented in a presidential primary.

“On the one hand, the unprecedented superstorms, wildfires, drought and heatwaves have made it impossible for fossil fuel interests and their enablers to dismiss the threat of climate change. On the other hand, decades of policy inaction, thanks to their efforts, has ensured that we are now experiencing devastating climate impacts. The forces of inaction have moved away from hard denial and are instead engaged in a softer form of denial, i.e. deflecting attention away from the need for policy solutions by blaming the problem entirely on individual behavior… .

“Where I find optimism is in the energy behind the youth climate movement and the rising up of people around the world who are now demanding action on climate.

“We are now only one year away from a monumental election here in the U.S. where we have an opportunity to reassert leadership in the battle to avert dangerous climate change by voting in politicians who are willing to lead in this effort and voting out politicians who refuse to. There is great urgency, but there is also agency. It’s not too late for us to act.”