by Kate Harveston: Your DNA might appear to be a code that’s written in stone, but research by Coventry University has proven otherwise… 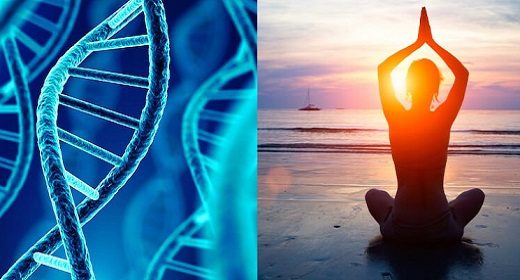 Sometimes, our minds and bodies can work together to change the way we react to stress. And that can start with a mind-body intervention (MBI) like yoga, meditation or Tai Chi.

The Coventry University team analyzed research and studies gathered over a 10-year period to see how genes change once a person takes on an MBI-related practice. Yoga, meditation and Tai Chi fit the bill, as did the practice of “mindfulness.”

Simply put, “mindfulness means you’re paying attention” [1]. Peeling back the layers a bit, we realize that it’s not as simple as acknowledging what’s happening in the present moment — it’s blocking out the thoughts that have you concerned with the past or future, which can leave us feeling anxious. Being mindful can even prevent us from feeling overwhelmed by the present as well.

And it’s possible to hone mindfulness through a multitude of activities, or MBIs, as previously mentioned. The researchers at Coventry analyzed the results of 18 studies, which gave them the data of nearly 900 participants gathered over 11 years. With that information in hand, they sought to understand how gene expression changes and how they affect the make-up of the mind and body.

When a person is stressed out, their sympathetic nervous system switches on. This is what activates our fight-or-flight response — when it’s flipped on, it boosts production of a molecule known as NF-kB, which, in turn, stokes the creation of cytokine proteins. They cause inflammation, and, in a real fight-or-flight scenario, this is good — inflammation can hasten recovery from injury or infection. And, for the humans from which we evolved, this was a great evolutionary addition to their bodies. If the hunter-gatherers were injured, they could heal and survive.

But this response is only supposed to trigger for a short period of time, and today’s world leaves us to carry ongoing, excessive amounts of stress and anxiety. And, with prolonged tension comes prolonged inflammation, which can cause damage to cells and many other adverse side effects including a laundry list of diseases and chronic illness [2]. Everything from cancer to asthma to diabetes to mental illness can be traced back to inflammation.

Research into the effects of MBIs found that they helped assuage this damaging extended fight-or-flight reaction. Those who meditate or do yoga saw their production of NF-kB and cytokines stall, which meant they could reverse the pro-inflammatory pattern with which many others deal. Therefore, they saw a decreased risk of the conditions that can be caused by inflammation, as the body has a much calmer reaction to stressors.

MBI practices offer many other significant health benefits to the body as well. For example, yoga is a powerful way to strengthen our bones and muscles, particularly in places like the lower back, where 50 to 80 percent of people will experience pain at least once in their life. [3]. Coventry University’s lead investigator, Ivana Buric, said their findings would be enlightening for regular practitioners of yoga [4]. Some might not even know that they were bettering their bodies in a way that could re-write their DNA’s response to certain triggers.

“Millions of people around the world already enjoy the health benefits of mind-body interventions like yoga or meditation, but what they perhaps don’t realize is that these benefits begin at a molecular level and can change the way our genetic code goes about its business,” she said.

For one thing, this research could inspire those who feel triggered by anxiety regularly to pick up an MBI-centric practice and try to rewire their response to stressors. It will undoubtedly bolster those who have already felt the effects.

Still, Buric did say that further research would have to take place since this study only explored the MBI avenue. “More needs to be done to understand these effects in greater depth, for example how they compare with other healthy interventions like exercise or nutrition. But this is an important foundation to build on to help future researchers explore the benefits of increasingly popular mind-body activities,” she said.

Researchers at Harvard University have previously revealed that our minds wander for 50 percent of the time we spend awake. In some ways, a wandering mind is a good thing — we can relive happy moments or think about people we love. But we can also dwell on regrets or fears, and these might stir up a stress response. Therefore, wandering minds can sometimes make us feel unhappy.

So, the Coventry University study revealed a powerful tool we have against this discontent — and it starts with the same mind that is causing it. Whether you prefer yoga, Tai Chi or meditation, or find yourself better able to clear your mind while running, swimming or playing team sports, finding your MBI is the beginning of the process. As you practice and gain more control over your mental ruminations, you’ll start to notice a real difference in your mental and physical health. In other words, it’s okay to let your mind wander, so long as you know how to rein it back in. A regular MBI practice can help you do this.

The research didn’t reveal how MBIs can make such a change in our bodies, right down to the DNA code they help to rewrite. But, if you suffer from chronic stress and inflammation, there may be a lot to gain from such an activity.