Every year more than 30 million microwave ovens are sold… 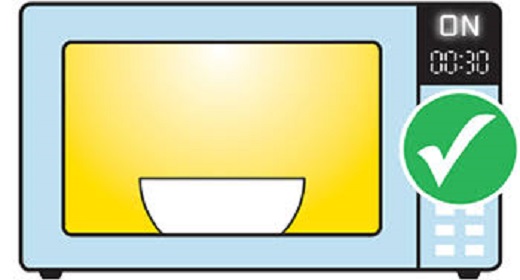 And there’s no question they can add a measure of convenience. But are they safe? And are they a good way to cook? Here’s what we know (and don’t know) about microwave ovens and the health effects of using them.

Comedian Steven Wright once said, “I just bought a microwave fireplace. You can spend an evening in front of it in only eight minutes.”

Like Wright’s imaginary fireplace, microwave ovens can also shorten the amount of time it takes to accomplish another task: cooking our meals. They’ve proliferated quickly since their commercial introduction in the late 1960s, so much so that it’s now hard for many of us to imagine a kitchen without one.

And along with the technology, the food industry has innovated tens of thousands of products designed to work with the microwave oven. The microwave oven has become so much of a default, that sometimes you have to experiment to figure out how to cook that frozen dish in boiling water or a pan or a toaster.

Microwave ovens have been widely available since 1967, but the first microwave oven came about in 1946. A Raytheon-employed engineer named Percy Spencer used World War II radar technology to accidentally produce the first microwave cooking oven, with which he melted a candy bar. Before long, Spencer was using his microwave to pop popcorn, which turned out to be a prescient choice: popcorn is still the most popular microwaved food.

Over the next few decades, microwave ovens evolved to include a turntable and to be more affordable and applicable for everyday consumer use. And today, nearly every modern home, restaurant, office building, and motel room has a microwave oven in it.

But even though microwaves have become a regularly used appliance, the question remains: are they safe to use?

What are Microwave Ovens and How Do They Work?

Microwaves were developed to cook and heat food quickly. They’re named for the electromagnetic waves that they produce — microwaves — which are longer than infrared radiation, but shorter than radio waves. The appliance uses a glass turntable to rotate food as it cooks, which helps to prevent cold spots.

Contrary to popular belief, microwaved foods don’t actually cook from the inside out. Microwave cooking begins within the molecules where water is present, and twists those molecules back and forth to produce friction and ultimately heat. Since not all areas contain the same amount of water, the heating is uneven. Because of this shortcoming, I don’t know a lot of chefs who love microwaves, except as a way to warm up things that were already previously cooked.

Let’s first address some of the concerns around using microwaves and how much truth may be behind them.

The biggest problem with microwave ovens actually isn’t the appliances themselves, but the poor foods that all-too-often accompany them. With our busy, on-the-go society, most of what people are using microwaves for is to cook or heat ultra-processed, food-like products that don’t do your health any favors. But in reality, that’s not the oven’s fault. The truth is, there’s a world of difference between microwaving an industrially produced frozen TV dinner and steaming some fresh or frozen broccoli.

In addition to what’s being put into the microwave oven, improper use of the appliance itself can also be problematic. You can injure yourself if you use a microwave incorrectly. One rule of thumb is to never put aluminum foil or metal pans in a microwave oven as the waves will be reflected off of them. This not only causes food to cook unevenly, but can actually spark and damage the oven, or even lead it to catch fire. Food containers can also get very hot; you can burn yourself if you try to pick them up without kitchen mitts or towels. If you’re cooking something in a covered container, you might end up with steam burns to your face as you remove the lid.

Every day, about 21 people end up in American emergency rooms from “microwave oven-related injuries.” There are a few from microwave popcorn steam, overheated hair removal wax, and nearly one a day from exploding eggs (resulting from the pressure buildup of internal steam), but most are from overheated water. The FDA warns to be careful when trying to boil water in a microwave oven — particularly when dumping something into it.

Cooking TV dinners or using plastic wrap to reheat leftovers come with their own concerns. Many TV dinners actually instruct you to cook them with the plastic wrap still intact. But when plastic is heated, toxic chemicals like BPA and phthalates can leach out of the containers or covers, contaminating your food with endocrine disruptors.

In 2008, the Milwaukee Journal Sentinel put 10 “microwave safe” containers through a microwave oven and then had them tested in a lab. The containers included plastic types 1, 2, 5, and 7. Bisphenol A, or BPA, was found to be leaching from all of them. The amounts detected were at levels that can cause neurological and developmental damage in laboratory animals.

Frederick vom Saal, a University of Missouri researcher who guided the newspaper’s testing, commented: “There is no such thing as safe microwaveable plastic.”

But what about if microwave ovens are used safely — with foods that are cooked in, for example, glass containers with glass lids? Are microwaves inherently dangerous, or is the problem simply how they’re being used?

The World Health Organization notes that one of the biggest myths about microwave ovens is that foods cooked in them become radioactive. Some people even refer to cooking their food in a microwave oven as “nuking” it. Quite simply, this is wrong.

But microwave ovens do emit a type of microwave radiation. These “microwaves” are similar to light in how they behave; once in transit, they are either reflected or absorbed by materials in their path. How does this relate to consumer health? According to the FDA, which has been regulating microwaves since 1971, radiation-related injuries are very rare. Cases are typically the result of improperly serviced appliances that led to overexposure of leaked microwaves. FDA regulations require that microwave ovens are sealed to prevent high-level radiation leaks. Their website notes that there is little concern about radiation leakage unless your microwave has any damage to its door seal, latch, or hinges. If your microwave continues to run with its door open, the FDA recommends no longer using it, as this could cause radiation to leak out.

But there’s another cause for concern: Microwaves can’t always be trusted to cook foods homogeneously. Foods undercooked in microwave ovens can pose public health risks since the pathogens that could be lurking in raw foods may not be killed. This is mainly a concern for meats, fish, and other high-risk, animal-derived products, which need to be heated to at least 140°F to kill pathogens, some of which may even be resistant to antibiotics.

Yet another concern around microwaving animal foods was raised by a 2015 study published in the Journal of Food Processing and Preservation, which found that more cancer-causing heterocyclic aromatic amines (HCA) were created in meat when microwaved than when it was pan-fried, baked, or even barbecued.

And there are concerns that microwaving foods may reduce some of the nutritional quality of certain foods when compared to other cooking methods. For example, a 2004 study published in the International Journal of Food Sciences and Nutrition found that protein from microwave-cooked legumes was 5% less digestible than the protein from legumes that had been cooked in a pressure cooker. More dramatically, a 2003 study found that microwave-cooked broccoli lost up to 97% of its beneficial flavonoids, compared to only an 11% reduction when the broccoli was steamed. Another study found that a microwave heating time of 60 seconds was long enough to deactivate the cancer-fighting compound alliinase in garlic.

There are also a lot of perks to having microwave ovens so readily available to us. If there weren’t, we wouldn’t be using them all the time.

Microwave ovens are just about the fastest and easiest way to prepare (or at least, to heat) many foods. In most cases, the best way to cook your vegetables is the one that gets you to eat them, and for some people, based purely on convenience, that may be in a microwave oven.

These ovens are also easy to clean — much more-so than a conventional oven — as long as you follow directions and prevent splatter or explosions.

Some research has also found that vegetables cooked in the microwave retain more antioxidants than those cooked via other methods. A 2009 study published in the Journal of Food Science looked at the effect of boiling, microwaving, pressure-cooking, griddling, frying, and baking on the antioxidant activity of 20 different vegetables. Overall, they found that griddling, microwave cooking, and baking resulted in the smallest antioxidant losses. Cooking methods that used water had a more significant impact on antioxidant activity in vegetables. To be clear, the difference here is not huge, but it could be a point in the microwave oven’s favor.

Just because the microwave is commonly used for TV dinners, that doesn’t mean it can’t be used for healthy meals too. Of course, you can always use a microwave to steam some fresh or frozen veggies. And if you want to be a bit more industrious (but still quick), here are three healthy recipes that can be prepared swiftly in a microwave oven.

Best Ever 5-Minute Microwave Hummus by Minimalist Baker – This recipe cooks undrained, canned chickpeas and garlic in the microwave to soften them. And then blends in tahini, lemon juice, salt, and olive oil for a quick and easy, traditional dip.

Mexican Stuffed Baked Potato by Dora’s Table – If you’re looking for a fast alternative to baked potatoes cooked in a conventional oven, this is it. You can save yourself nearly 90% of the typical time needed to make baked potatoes by microwaving them instead. Once softened — which takes less than 10 minutes in the microwave — you can slice them open and stuff them with your favorite ingredients.

Spiced Lentils with Yogurt, Almonds, and Mint by Power Hungry – Here’s a nutrient-packed, easy microwave meal that only takes a few minutes to prepare. A combination of lentils, tomatoes, and spices culminate together in the microwave and are then topped with almonds and yogurt. We recommend starting with leftover, home-cooked lentils, rather than canned. And keep in mind that yogurt can be made from a soy, almond, coconut, and even cashew base — no cows required.

Most microwave users put plastic and ultra-processed foods in their ovens, thus exposing themselves to a host of chemicals believed to contribute to cancer, heart disease, endocrine disruption, and many other ailments.

And research is still ongoing on whether or not the EMFs and radiation emitted from microwave ovens present long-term health dangers. We don’t know that they do. And that doesn’t mean we are certain that they don’t.

But when used correctly and for healthy foods, based on currently available research, microwave ovens appear to be safe.

So, should you use one? Ultimately, that’s a personal choice. I don’t know many people who think of microwave ovens as being especially conducive to gourmet cooking. But life can be stressful, and if a microwave oven helps you to have a little more ease, to spend more time with loved ones, or to have an easier time eating healthful foods, then that sounds like a win to me.

And I don’t honestly think it’s likely to do you much harm, unless you put metal in it, explode an egg, or drop it on your foot.