Boeing Patents Strange-Looking Plane That Could Fly For Years

by Jake Ellison: A plane that can fly at a high altitude and be powered only by the sun could stay aloft for years… 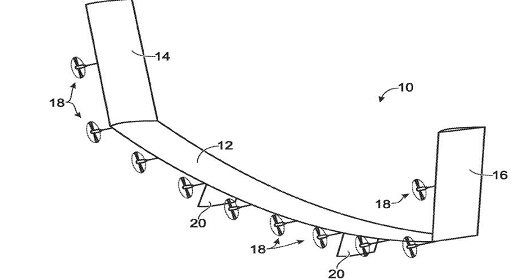 but one of the key challenges for flying wings or planes powered by solar panels is keeping the sun’s light hitting the panels.

That’s why Boeing’s flying wing looks so odd: “The present disclosure provides a solar powered aircraft including a modular main wing and a pair of relatively large modular winglets attached to the transverse end portions of the main wing. To collect solar radiation, including relatively low-angle radiation, solar panels are mounted to both the main wing and the winglets,” the company writes in its patent application.

The application also lists potential uses for a solar-powered plane that could stay in a fixed position over a city, for example:

This plane would be fundamentally different from the piloted solar plane currently hopping across the planet. Flying people around the world in planes powered by sunlight sounds cool, but there’s a problem, as the Boeing application also points out:

The conclusion is that a very special airplane is needed–one that can fly on very low power while gathering lots of solar energy.

Consequently, it’s unlikely you and I will be getting around via solar-powered planes, but clearly there are other uses for such vehicles. Here’s a video explaining Boeing’s new concept.