Hemp Batteries Are More Powerful Than Lithium And Graphene 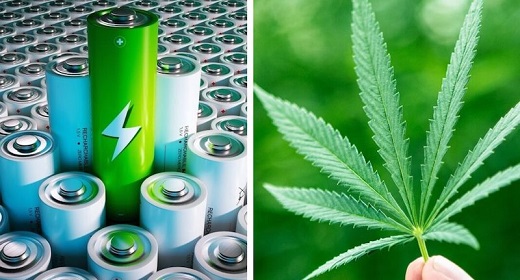 It’s truly a miracle, and one that threatens a number of industries, not to mention the pharmaceutical industry. That being said, it’s making tremendous leaps, and the movement cannot really be stopped in all areas that this plant can provide solutions.

One of the latest examples comes from research showing that hemp batteries are even more powerful than lithium and graphene. Robert Murray Smith, on his popular YouTube channel, discusses  the experiment.

He started to observe a Volts by Amps curve of the lithium and hemp batteries.  To his initial surprise, the power underneath the hemp cell was a value of 31 while that of the lithium cell had a value of just 4. Smith claims that he really hasn’t done anything remarkable and that the results of the experiment simply show the performance of the hemp cell is “significantly better” than its lithium counterpart.

This isn’t a new discovery In 2014, researchers in the US found that waste fibers from the hemp plant can be transformed into “ultrafast” super capacitors that are “better than graphene.” In their experiment, led by Dr David Mitlin of Clarkson University, New York, the researchers ‘cooked’ leftover bark fibers of the plant (they normally end up in land fill or compost dumps) into carbon nanosheets. The total process is known as hydrothermal synthesis. As a result the team then  recycled the fibers into supercapacitors, which are energy storage devices. Supercapacitors have revolutionized the way electronics are powered.

The peer-reviewed journal paper ranks the device “on par with or better than commercial graphene-based devices.”