By Marisa Martinelli: Though Joker may be dominating the conversation after the 2020 Oscar nominations were announced on Monday… 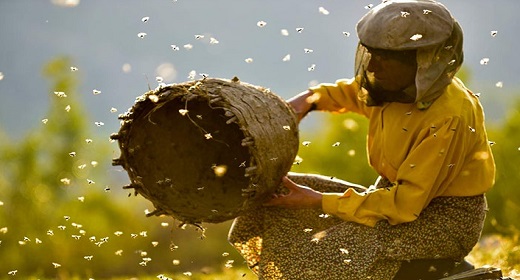 a fascinating documentary about beekeeping is generating its own buzz (sorry). Honeyland, which follows wild beekeepers in the small village of Bekirlija, is only the second movie from North Macedonia to be nominated in the academy’s Best International Feature category, previously known as Best Foreign Language Film. It’s also the first film ever to be nominated for the Academy Awards for International Feature and Documentary Feature in the same year.

The word foreign was removed from the Best Foreign Language Film category on the grounds that it’s an outdated way of thinking about movies in 2020, but the rules for eligibility in the category remain the same. Movies must be feature length, produced outside the United States, and mostly in a language other than English. Each country can only submit one film that fits that description per year, and there were 93 submissions for this year’s ceremony.

The Republic of North Macedonia, as it’s officially known, is located in southern Europe and was formerly part of Yugoslavia before declaring independence in 1991. (It was originally called the Republic of Macedonia but had to change its name over a dispute with Greece.) North Macedonia was previously nominated for the 1994 film Before the Rain. Twenty-five years later, its second nominee, Honeyland, is up against films from Poland, Spain, France, and, in another historic first, South Korea. Parasite is nominated for six Oscars including Best Picture, making it a shoo-in for International Feature, so Honeyland stands a much better chance of winning Best Documentary.

Shot over the course of three years, Honeyland follows beekeeper Hatidze Muratova, whose sustainable approach to harvesting honey leads her to clash with her new neighbors. Directors Ljubo Stefanov and Tamara Kotevska describe working in “almost unbearable life conditions, in a village without roads, electricity, running water, or available food, beaten by bees and fleas in +40C, or bitten by frost and cold in -20C.” The Missing Picture and Waltz With Bashir, two nonfiction films that both happen to be partially animated, have made the cut for Best International Feature, but neither was nominated for Best Documentary Feature, so Honeyland’s inclusion in both categories marks quite an achievement.