by Sophie Vorrath: Scotland is shaping up as an exemplary host for this year’s UN climate conference… 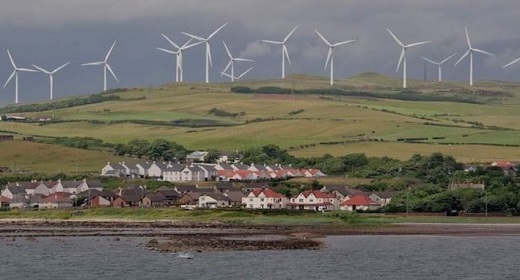 with data showing it is likely to meet its national target of 100 per cent renewable electricity in good time for the crucial November meeting.

Scotland, whose southern city of Glasgow was named last September as the host for the 26th Conference of Parties (COP26), has a goal to source the equivalent of 100% of its electricity demand from renewable energy sources by the end of this year.

And it is shaping up to do just that. Having closed its last coal-fired power plant in 2016, the UK country’s only remaining fossil fuel source is a gas-fired power station at Peterhead in Aberdeenshire.

In the meantime, Scotland has been making great progress on renewables – and particularly wind power.

On the technology front, it lays claim to installing the world’s first floating offshore wind farm, the 30MW Hywind project, to which it added last June a 1MW onshore battery storage system.

And in terms of output, a new national record was set in November last year, with production outstripping demand on 20 out of 30 days and over the whole month providing 109 per cent of electricity demand.

Scotland’s largest source of renewables – the Beatrice Offshore Wind Farm – can generate enough power for 450,000 homes. And the Seagreen Wind Farm, which is being built off Angus, will be bigger again, and able to power one million homes once completed.

And while it’s not quite officially 100 per cent renewable yet – according to the BBC the most recent official figure was 76.2%, based on 2018 data – a recent report from Scottish Renewables estimates it will hit its mark within the year thanks largely to ambitious and forward-thinking government policy.

As well as its 100 per cent renewables target, the Scottish government has set itself a legally-binding target to cut greenhouse gas emissions to net zero by 2045, five years ahead of the UK, and leagues ahead of countries like Australia. (And as the BBC points out, Scotland also doesn’t rely on international credits or any other sort of tricky accounting to disappear emissions.)

All told, this will provide great inspiration for COP26, which is being billed as one of the most important international climate conferences since Paris in 2015.

As noted in The Conversation earlier this month, the two-week meeting – from November 9-19 – is considered pivotal for a number of reasons, not least being that 2020 is the year when all countries, including Australia, are asked to submit their new long-term climate goals.

The meeting will also be expected to tie off the loose ends of COP25, in particular to set out the rules for a carbon market between countries, deal with Australia’s much criticised claims of “surplus credits” and set in motion the 2015 Paris Agreement as the key driver of international climate action.

And it will be held just after the US presidential election. The results of the last election, when Donald Trump won in 2016, left delegates at the Marrakesh conference stunned, and many in tears. Trump has since announced he will pull the US out of the Paris treaty.