by Ted Thornhill: Prepare for immediate readjustment of your bucket lists… because the best places to visit in 2020 have been named by the adventure experts at Lonely Planet – and it’s Bhutan that’s the No1 country, followed by England.

The best cities have been named as Salzburg, Washington DC and Cairo and the best regions as the Central Asian Silk Road, Italy’s Le Marche, Japan’s Tōhoku and Maine in America.

The best places to visit in 2020 have been named by Lonely Planet – and it’s Bhutan that’s the No1 country. Pictured is one of its most spectacular sights – the ‘Tiger’s Nest Monastery’ 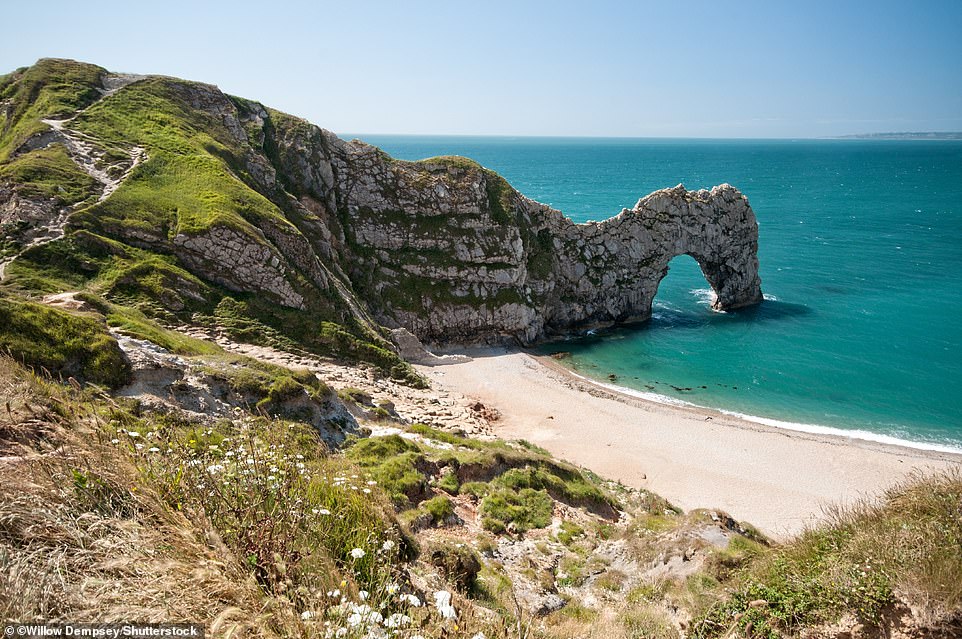 England has been named as the second-best country to visit in 2020. Pictured is the limestone ‘Durdle Door’ arch on the country’s Jurassic Coast in Dorset 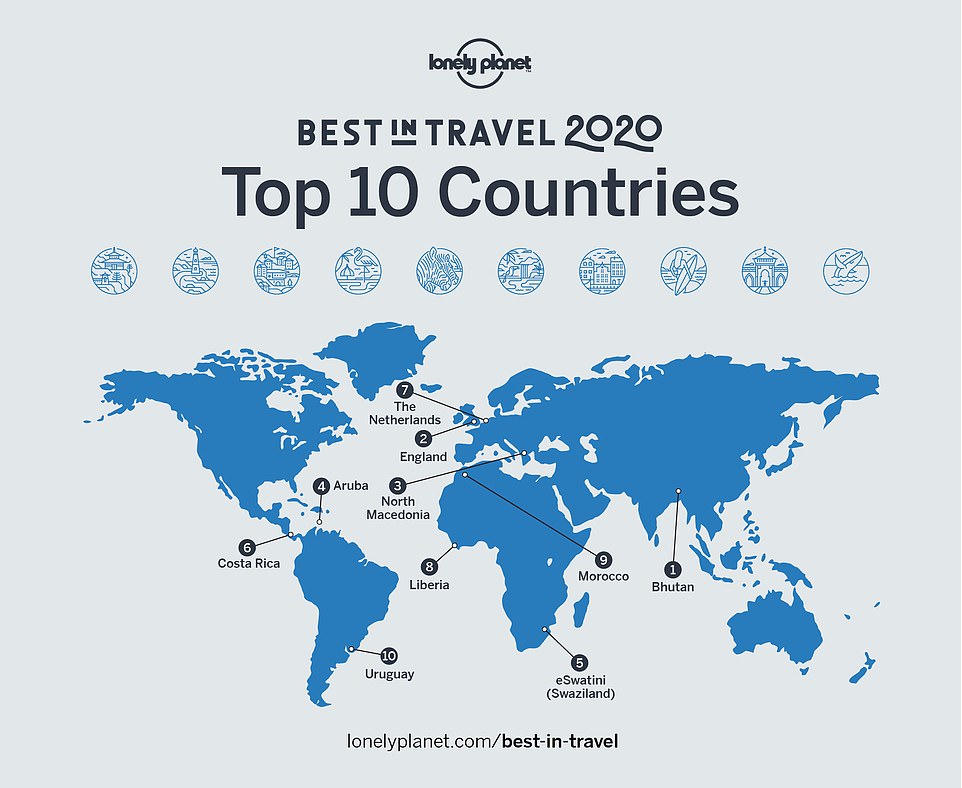 The best value spots are East Nusa Tenggara in Indonesia, Budapest, Madhya Pradesh in India and Buffalo in the U.S.

In justifying Bhutan taking the coveted number-one country spot, Lonely Planet says that it’s a ‘tiny piece of Himalayan paradise’ that has a good claim to being ‘a real-life Shangri-La’.

It adds: ‘If you like your mountains snow-capped, your nature untamed and your monasteries humming with the sound of Tibetan horns, look no further than Bhutan.’

’Brexit uncertainties have dominated the headlines in recent years but one constant amid all the confusion has been the timeless treasures that England is famous for – the historic castles and cathedrals, the quaint villages and rolling countryside, and of course, the seaside,’ states the entry in the book.

‘Taking a bracing walk on a windswept pier, eating delicious fish and chips, searching for marine life in rock pools, finding fossils in ancient cliffs, building sandcastles and dolphin-spotting on picturesque beaches are just some of the activities offered by the English seaside.’ 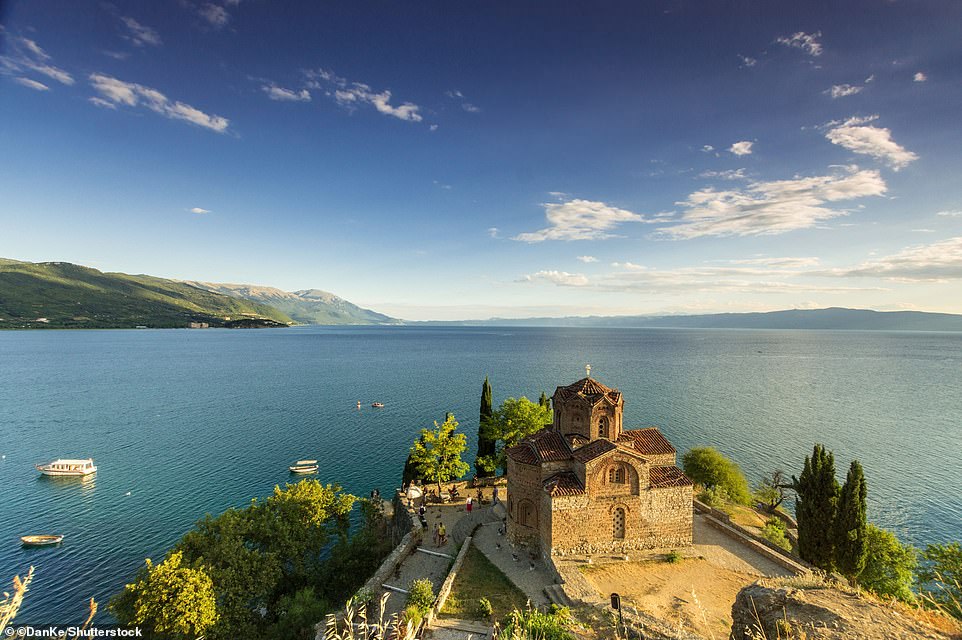 North Macedonia takes third place in the country ranking, with Lonely Planet highlighting the recently launched High Scardus Trail, a 495km (306-mile) trek along the region’s most dramatic peaks, as one of the best attractions. Pictured is the country’s Lake Ohrid 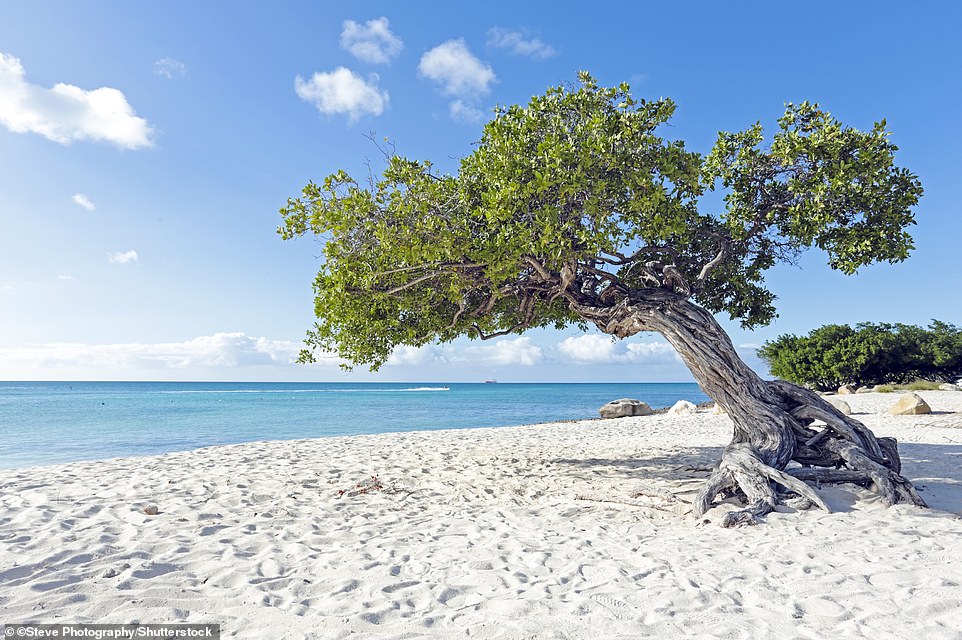 The Caribbean island of Aruba has come fourth in the countries ranking. Pictured are its Divi-divi trees, bent by the trade winds 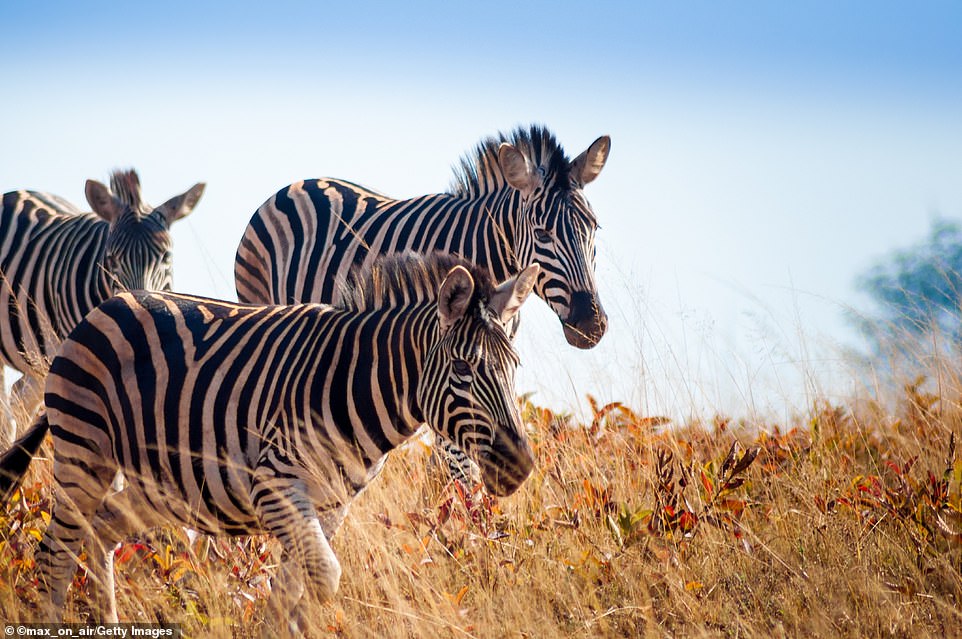 A group of wild zebras running through long grass at Mlilwane Wildlife Sanctuary in central eSwatini, which has come fifth in the country ranking

Tom Hall, Lonely Planet’s VP of Experience, said: ‘For a relatively small country, England offers a lot of breathtaking scenery. There are 10 national parks and 34 Areas of Outstanding National Beauty – not to mention one of Europe’s longest coastlines – which travellers will soon be able to enjoy in full as the England Coast Path continues to take shape. If travellers are seeking exhilarating beauty in 2020, England won’t disappoint.’

North Macedonia takes third place in the country ranking, with Lonely Planet saying: ‘It’s already renowned for gastronomy, ancient tradition and nature, but culture junkies and adventurers will find new excuses to visit in 2020 with the addition of flight routes to Unesco-protected Lake Ohrid and the recently launched High Scardus Trail, a 495km (306-mile) trek along the region’s most dramatic peaks.’ 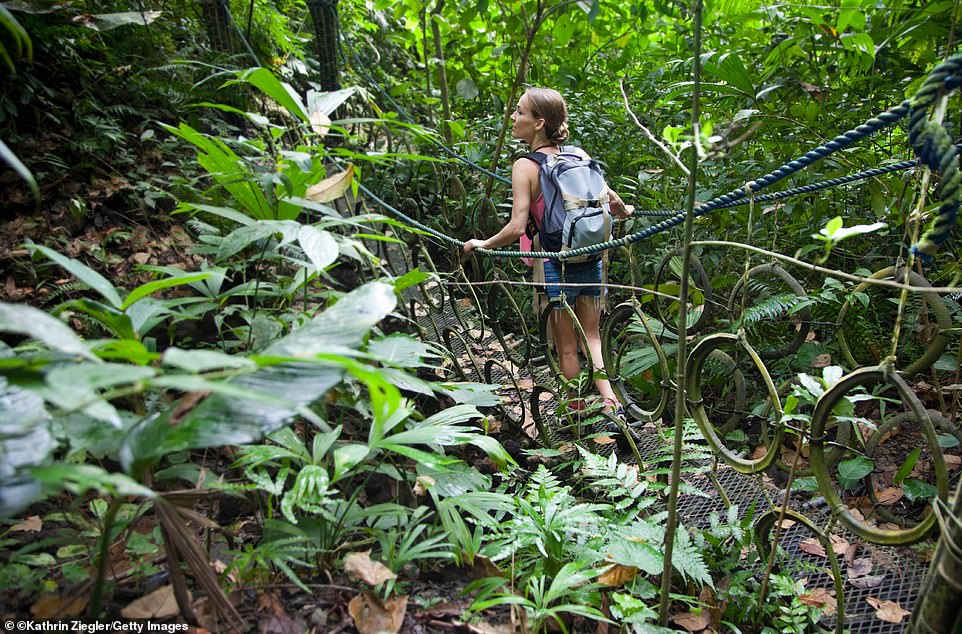 A female hiker crossing a hanging bridge in dense jungle near Quepos, Puntarenas province, in Costa Rica, which is sixth in the countries ranking 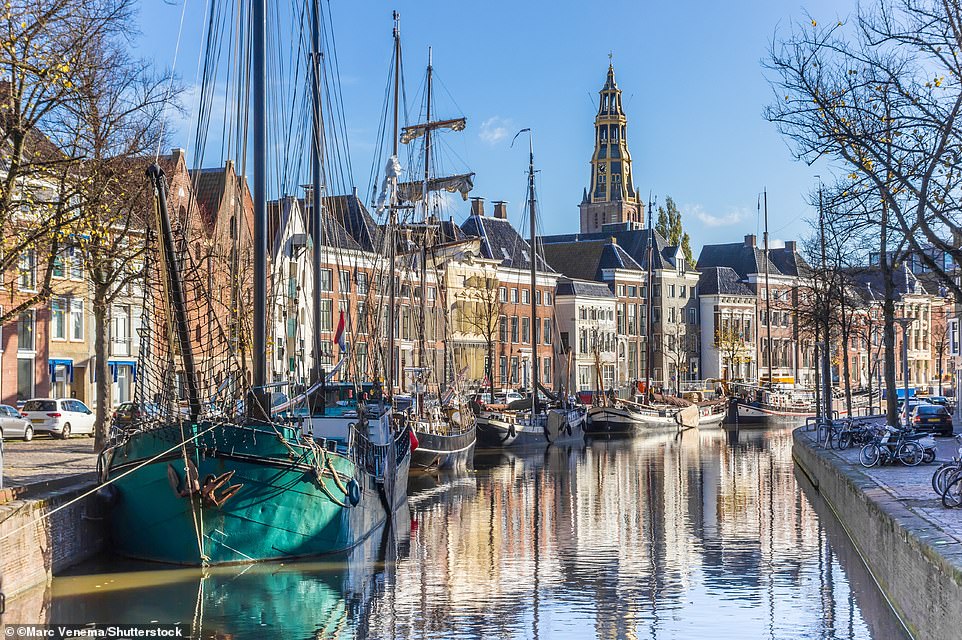 The Netherlands has claimed seventh place in the countries list. Pictured is a canal in Groningen, in the north of the country 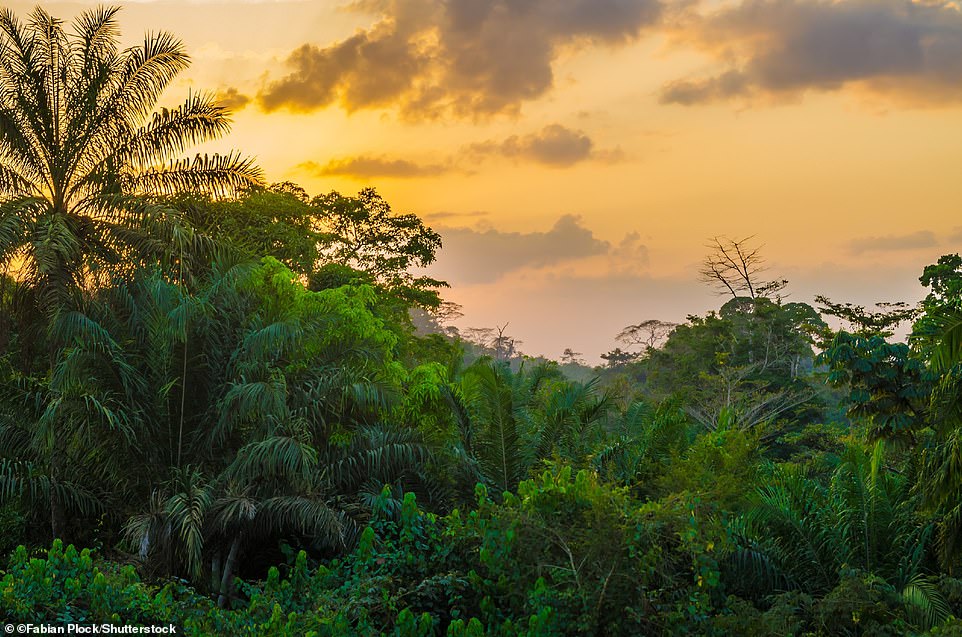 Liberia is in the eighth-best country berth. Pictured is a sunset over its protected rainforest 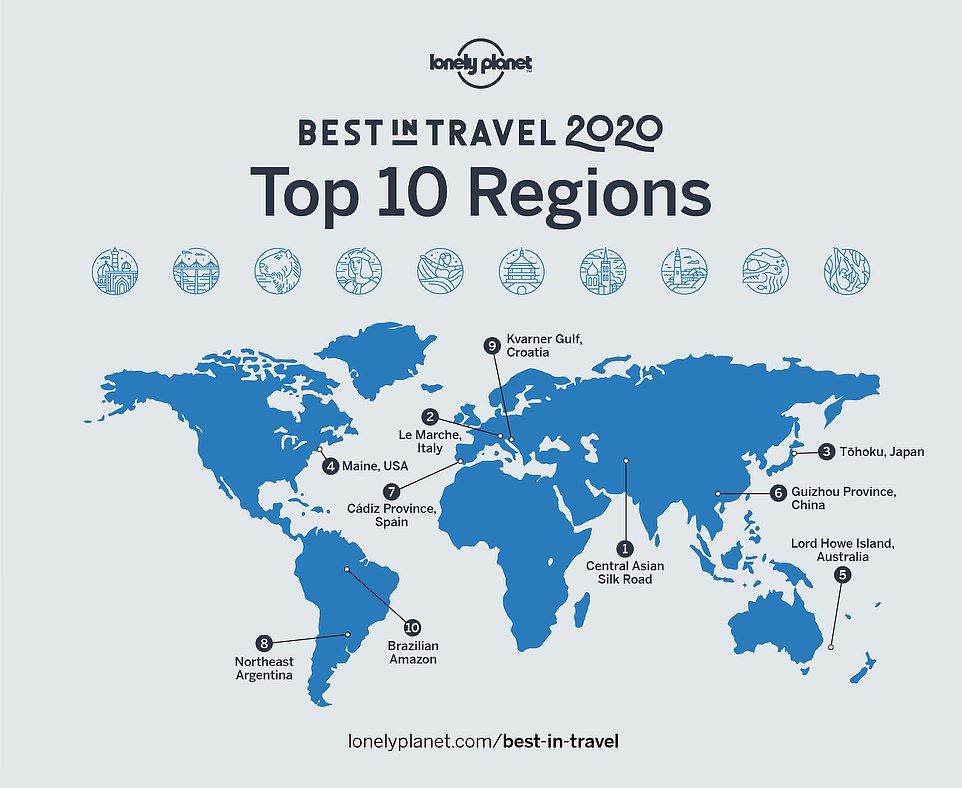 In the cities ranking, Lonely Planet says that Salzburg is a worthy winner because of its ‘Unesco-listed baroque old town’ and ‘high-on a-hill medieval fortress’, the ‘galleries rammed with phenomenal art’, the concert halls – ‘some of Europe’s finest’ – and ‘uplifting mountain views’.

Second-place Washington DC, the guidebook enthuses, is in the midst of a renaissance, with ‘a revitalised waterfront, celebrated new museums and an exploding food scene… and the city is looking greener than ever’.

The other podium occupant, Cairo, is praised for its Grand Egyptian Museum (GEM), the downtown street food scene, the Khan Al Khalili medieval mall and, of course, the Pyramids of Giza. 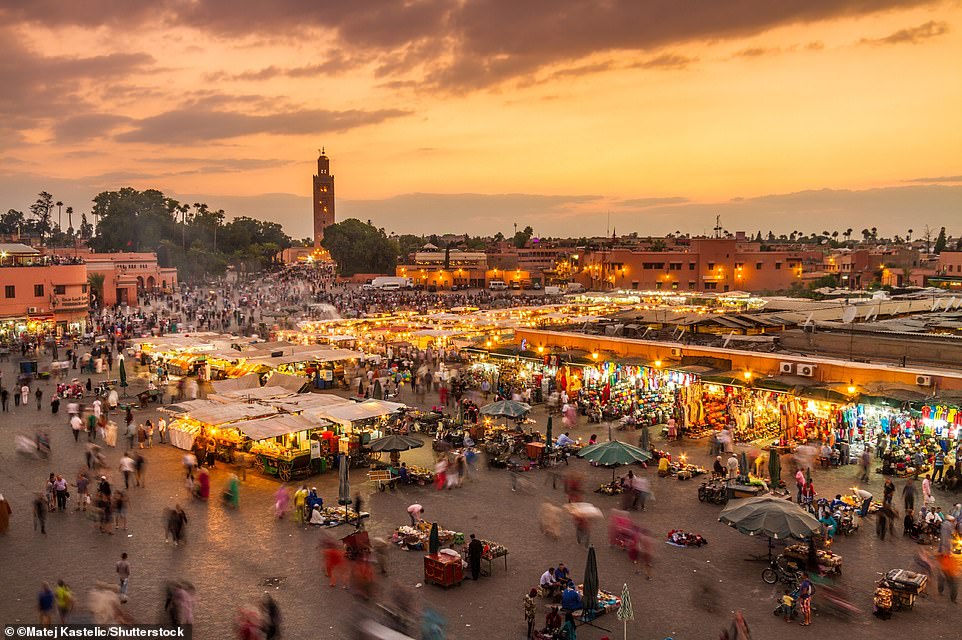 The penultimate nation in the country ranking is Morocco, which is home to incredible bazaars like this one in Marrakesh 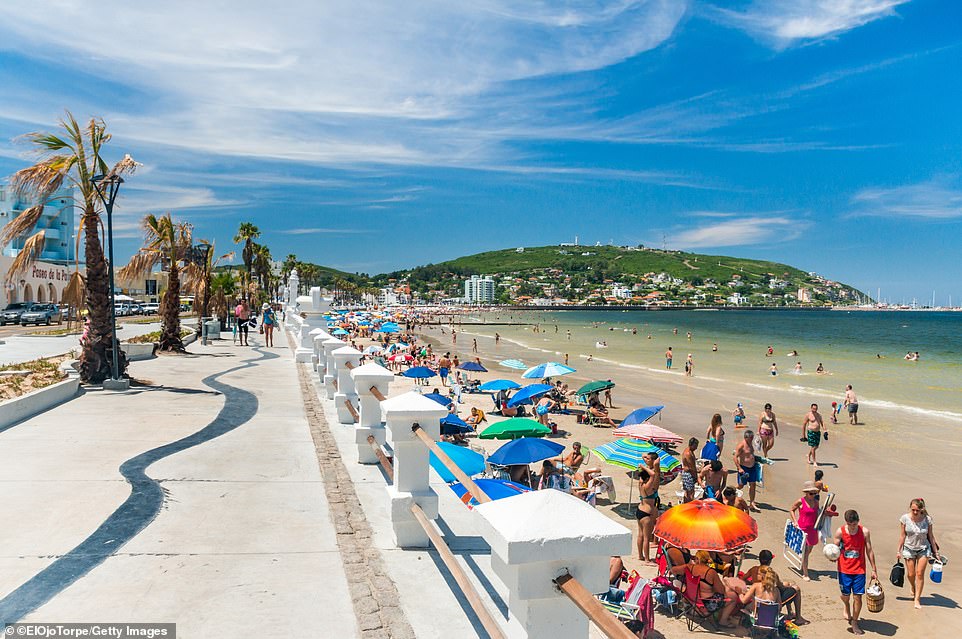 In 10th place in the country list is Uruguay, which is home to the coastal city of Piriapolis (pictured) 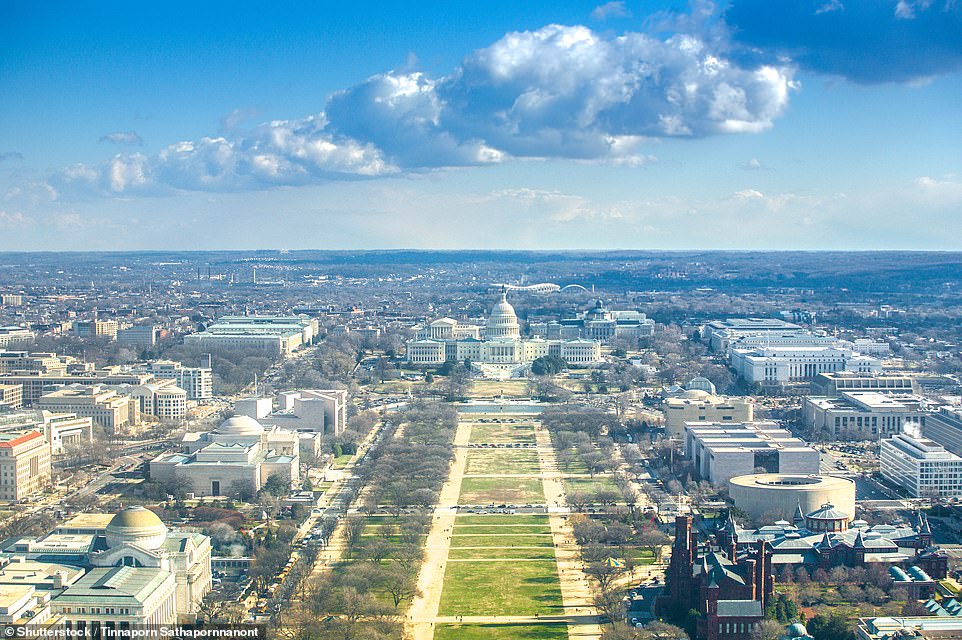 Washington, DC, is second in the city ranking. Lonely Planet says that it’s in the midst of a renaissance 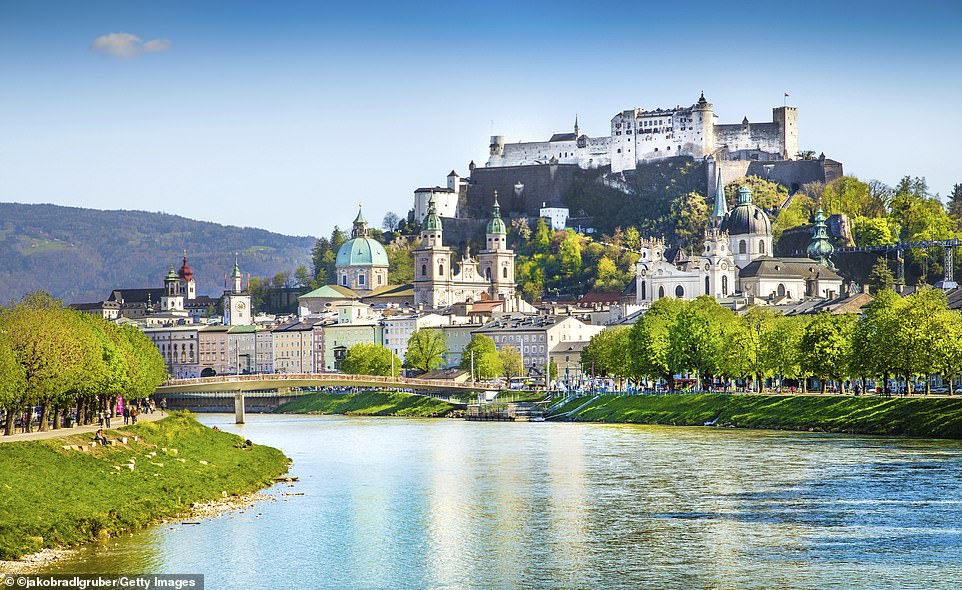 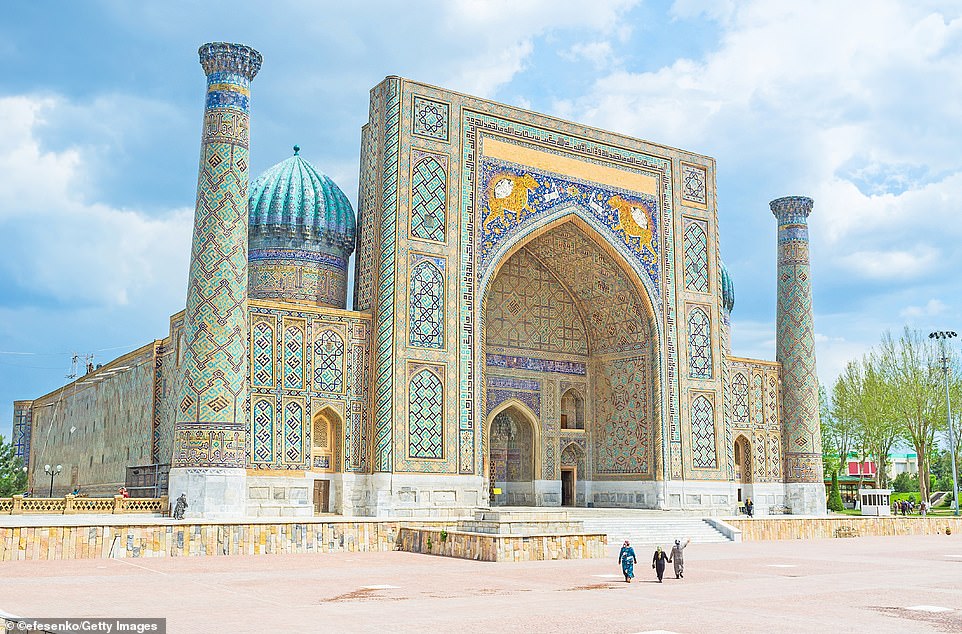 Uzbekistan’s Registan is a stunning ensemble of architectural gems. It’s in the top region – the Central Asian Silk Road 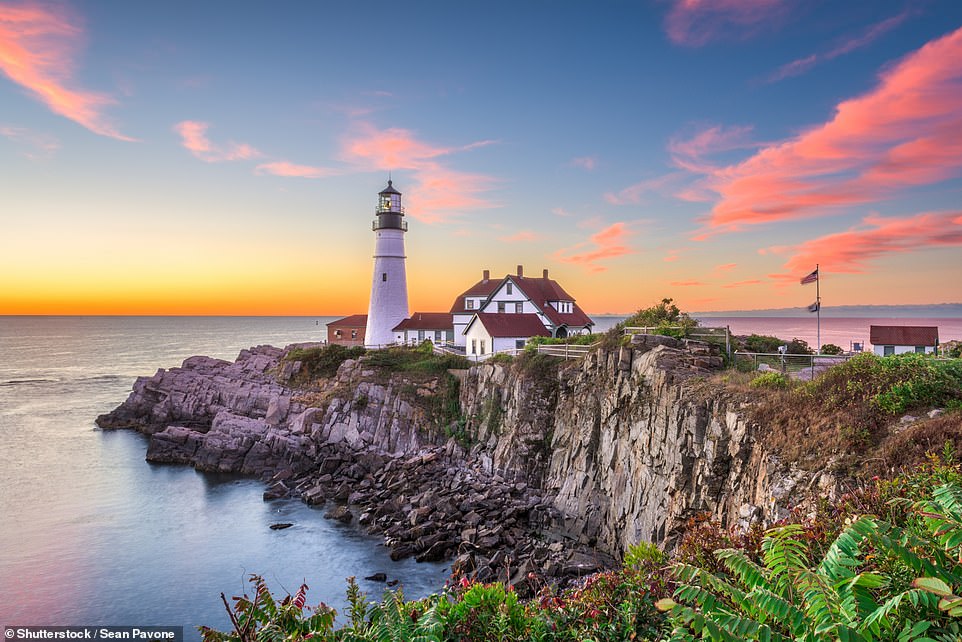 Maine has come fourth in the regions ranking, with Lonely Planet praising its ‘dramatic, lighthouse-strewn coastline’. Pictured is the state’s Portland Head Light 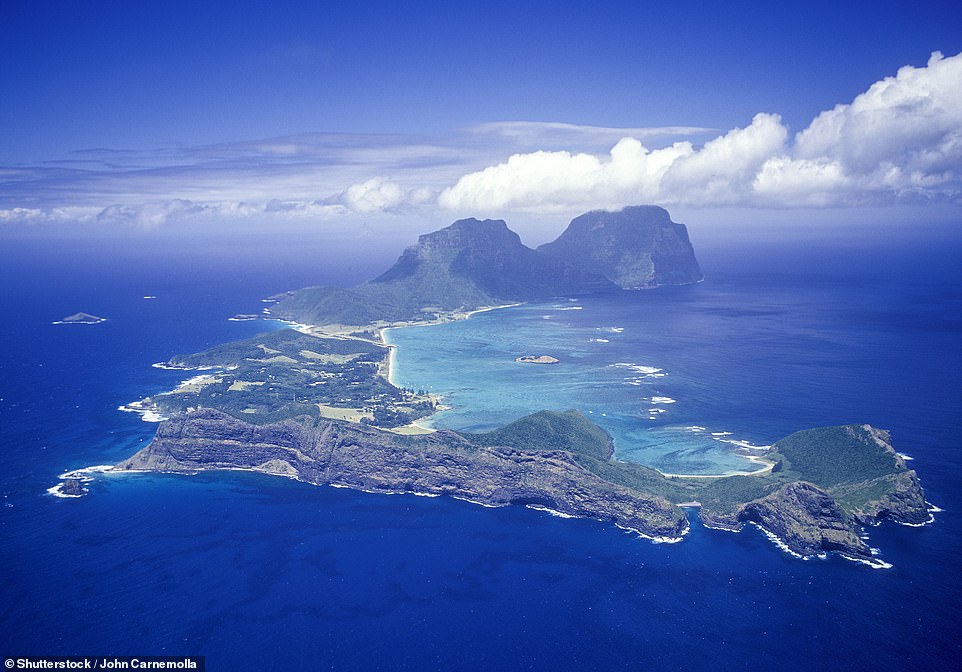 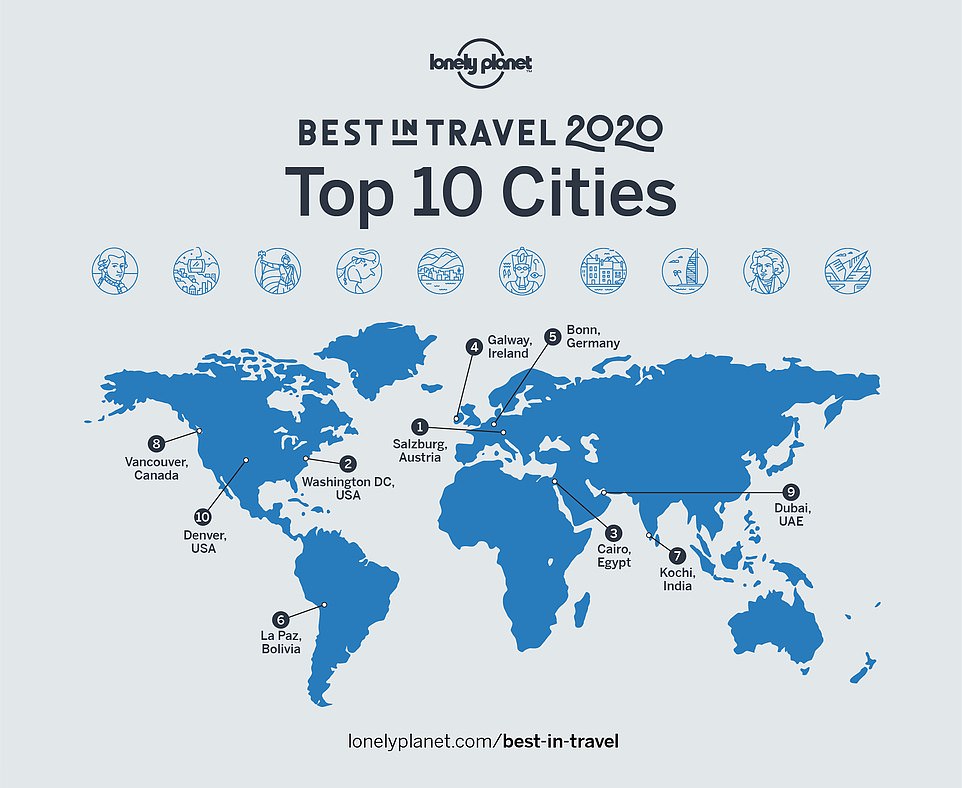 THE TOP 10 COUNTRIES, CITIES, REGIONS AND BEST-VALUE DESTINATIONS FOR 2020

Turning to the regions ranking, Lonely Planet states that the Central Asian Silk Road – comprising Kyrgyzstan, Tajikistan and Uzbekistan – is in the No1 spot because of its ‘ancient cities, bustling bazaars and wild landscapes’, and because there has been ‘massive transportation and infrastructure investment’, so it’s ‘more accessible than ever before’.

Le Marche in Italy bags second place in the regions list owing to its ‘higgledy-piggledy hilltop towns, gloriously gluttonous food festivals, winding countryside and resplendent Renaissance palaces’. And Maine claims fourth place because, the entry states, of a culinary scene that has ‘exploded in recent years’, ‘vast forests’ and a ‘dramatic, lighthouse-strewn coastline’. 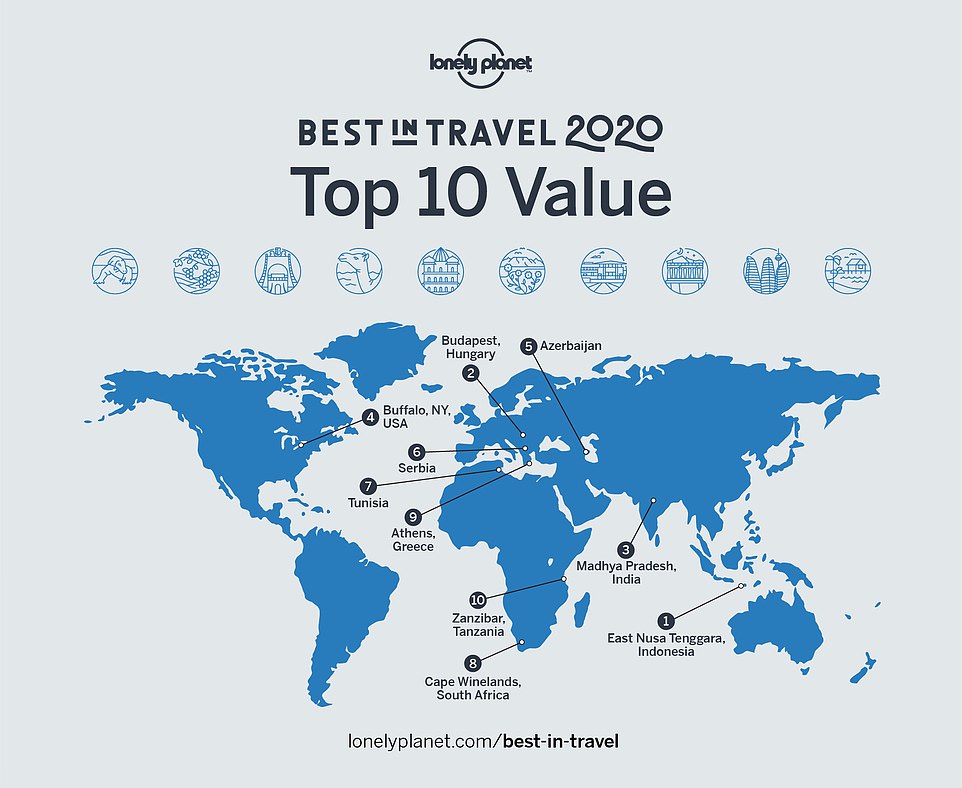 For sheer value, these places cannot be beaten in 2020, according to the Lonely Planet adventure experts 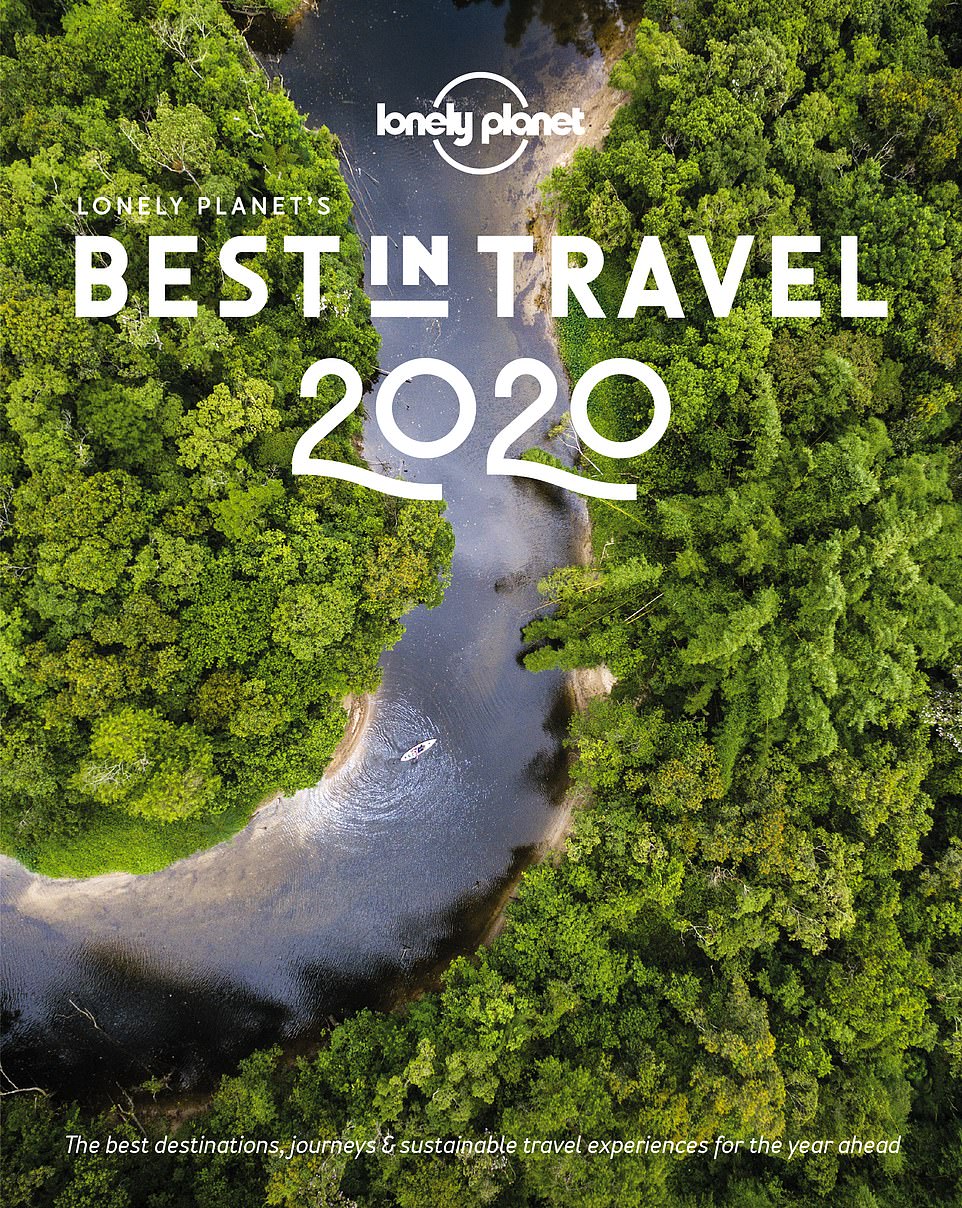 The best-selling book is now in its 15th edition. It covers the best travel destinations, trends, journeys and experiences to have in the year ahead