by Charlotte Hilton Andersen: “We have 1.5 times the amount of food needed to feed everyone on the planet, it’s just a matter of distribution…” 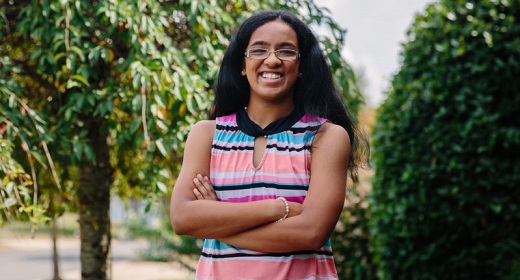 In her 17 years on this earth, Shreyaa Venkat has done more to help the planet and the people living on it than many adults two, three, and four times her age. The non-profit organization she founded, NEST4US, has helped tens of thousands of people in the United States. Through NEST Nurtures, they’ve served over 12,000 homeless people in the Washington, D.C. area by providing food and other supplies. NEST Tutors is a free tutoring program designed to help low-income kids in 19 local schools. NEST Kares collects school supplies for at-risk kids, makes blessing bags for the homeless, and provides disaster relief assistance. NEST Buddies provides a “birthday in a box” to low-income children and families.

Yes, she runs four different volunteer programs…in all her spare time as a high-school senior. Kids can do a lot of good in the world, like this 9-year-old who started her own charity!

A fifth-grader on a mission

Venkat’s passion for helping others started as soon as she could walk, as her parents, active volunteers themselves, brought her along on their various projects, like these creative ways to volunteer. By fifth grade, she’d developed such enthusiasm for it that she started organizing her own service projects in her community. “I like doing good things but I’d rather do them with friends,” she explains. “It brings me so much happiness and joy to help.”

Soon she was recruiting not just friends and family but the community as a whole, including businesses. 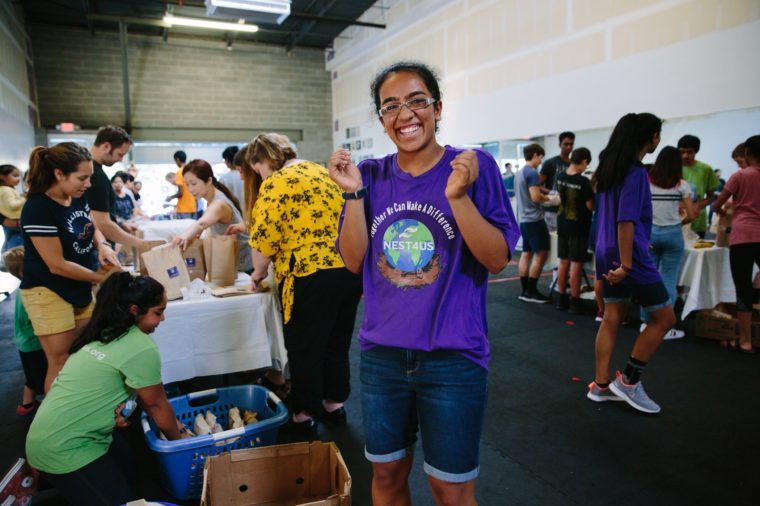 She gets big results by starting small

NEST4US was born when she realized how much food waste there is, how many hungry people there are, and how simple it would be to use the former to help the latter. “There was a homeless man standing on a corner in D.C. and he was holding a sign that said ‘Hungry Need Food’,” she remembers. “So I gave him my lunch—it was just a banana, a granola bar, and a water—and his whole face just lit up. I found out he hadn’t eaten in a week! It was so easy, it only took me 30 seconds, and it really helped him.”

Hunger is just one of the many harsh realities of living on the streets. But the ease of this small act inspired her to find a way to get food to the people who need it the most. True, this is a question politicians, community and religious leaders, and others have been wrestling with for, well, thousands of years. But she didn’t overthink it, she decided to just act.

All you have to do is ask

How would she accomplish this huge task? Many kids her age have a hard time just talking on the phone but talking to strangers is not a problem for Venkat, who says she emails, calls, and talks to business owners in-person to solicit donations. From there, volunteers pick up the excess food—everything from bagels to bagged salads to hot entrees—and deliver it to local shelters and food pantries.

“We have 1.5 times the amount of food we need to feed every person on the planet, it’s just a matter of distribution,” she says matter-of-factly. “Thankfully there are so many people who want to help, all you have to do is ask them.”

You can start helping right in your own kitchen with these 9 tips to reduce food waste at home. 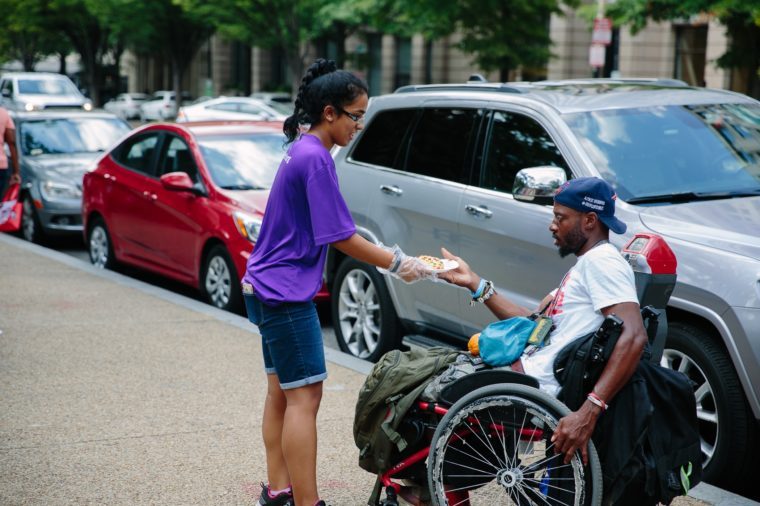 Celebrating her birthday at a homeless shelter

As the success of NEST Nurtures took off, with hundreds of volunteers helping to feed thousands of hungry people, Venkat decided to branch out with her volunteer efforts, starting three other branches of NEST. Serving others had become such a way of life for her that she even celebrated her 13th birthday at a homeless shelter, bringing the party to them instead of expecting gifts for herself—a tradition she and her sister have continued ever since.

Attached to every bag of food or donations is a hand-written note with a message of love, affirmation, optimism, and sometimes colorful drawings. It’s all too easy for people living on the margins of society to feel like they are invisible and no one even sees them, much less cares about them. Venkat knew they needed more than just food, they needed nurturing. So she recruited volunteers aged 4 to 70 to write the messages which are then attached to the donations.

Recently a homeless man at a shelter approached her to say that he had kept every single one of the notes he’d gotten, saying, “They really help lift me up, to know people care about me.” The notes may be a small “extra” but they provide that human touch. “To everyone who says they don’t know how to help, I tell them to write notes of encouragement—anyone, anywhere can do this and it really does mean a lot,” she says.

Who doesn’t love a little note of encouragement? Check out how one genius teacher used notes for addressing her students’ mental health issues. 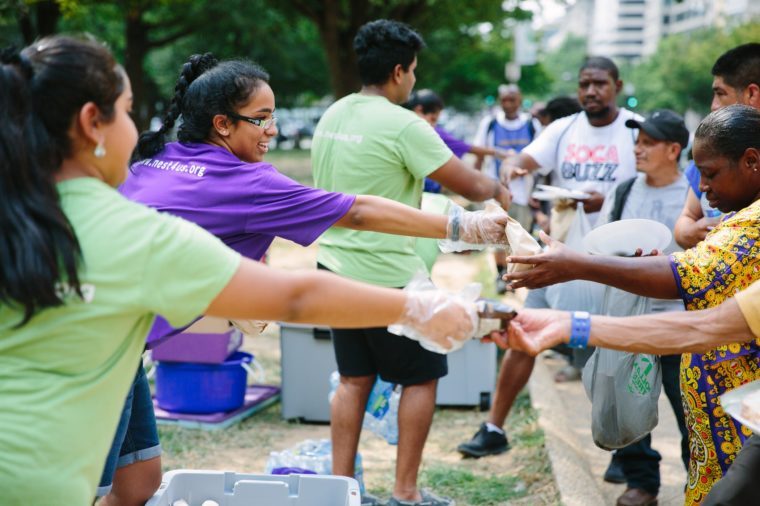 “It’s changed me as a person”

As much as she has helped others, they’ve helped her too, she says. Not only does she get a lot of joy and personal satisfaction from her volunteer work but she says running NEST has taught her important life skills like time management, public speaking, writing, and leadership. “What it’s really given me is this perspective, of putting other people first,” she says.

Shreeya graduates high school this year and she’s already got big plans. She plans to study at the John Hopkins University—one reason is for their excellent biomedical engineering and public health programs. But that’s not all! “It’s also because it’s in Baltimore and I know Baltimore has a large homeless population so I can continue my work there,” she says. “Whatever I do in the future, I know I want to keep helping people.” Read on for stories of 15 ordinary people who changed the world.