by Kash Khan: Need a boost? 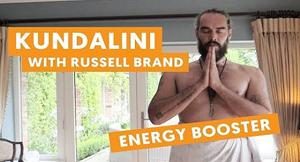 This Kundalini practice from Russell Brand can makeover everything from your digestion and metabolism to your sexual vitality in just a few short minutes. What’s stopping you from feeling your best today?

And for all the doubters out there…

This is not ” just hyperventilating”. The breathing increases oxygen intake. The arm movement forces circulation. This can aid in lymph drainage just like any exercise, and transports oxygen to the cells. The chants simply give a focus, and meditation has been proven to help people both physically and mentally in a variety of ways. Basically, just because you don’t get it, don’t assume its bunk.

Even in the yoga world, some people consider Kundalini yoga a bit strange. While many styles of hatha yoga can simply be used for a great work out, Kundalini yoga is different. So while celebrities are human beings just like everyone, the extensive list of Hollywood and entertainment business A-listers who have found Kundalini yoga beneficial goes a long way towards bringing Kundalini yoga into the mainstream. Just ask Madonna, Courtney Love, David Duchovny, and Rosanna Arquette – all of them have taken Kundalini yoga classes with Gurmukh. Actresses Jennifer Aniston and Melanie Griffith, and musicians Sting and Melissa Etheridge have done Kundalini yoga. Andie McDowell credits her youthful appearance to yoga, rather than the botox so many in Hollywood have used.  Oprah loves the divine music of Kundalini yogi Snatam Kaur and chants with her regularly.