by Allison Hirschlag: As old diesel trains are phased out of rail networks around the world, the UK is about to test a new type of engine that could help to decarbonise railways – hydrogen-powered trains… From the platform it looked like any other British commuter train. But as several hundred passengers climbed on board the steel-bodied carriages at Long Marston, they were met with an unusual sight. In one of its cars, passengers were encouraged to perch around four hydrogen fuel tanks, a fuel cell and two lithium batteries.

The train’s hydrogen power system produces sufficient power to take the train 50 to 75 miles. The train, called Hydroflex, is the UK’s first to be powered by hydrogen. It was being shown off to the public in June 2019 for the first time on the tracks at the Quinton Rail Technology Centre, a test facility at Long Marston, near Stratford-upon-Avon, in England.

Engineers who developed the new train, from the University of Birmingham and British rail company Porterbrook, wanted passengers to sit alongside the train’s hydrogen fuel cells. The sooner they would become familiar with the technology, the sooner they would feel safe, they reasoned.

Some apprehension around hydrogen as a fuel source is perhaps understandable considering the unfortunate history of hydrogen-filled dirigibles, namely airships such as the ill-fated British R101 and the German Hindenburg. But hydrogen-powered trains have been emerging as a viable – and much safer – means of transport. How close are we to fleets of trains that release only water as a waste product?

The way hydrogen powers a train like the Hydroflex is quite simple. The fuel cell is made up of an anode, a cathode and an electrolyte membrane. The stored hydrogen passes through the anode, where it is split into electrons and protons. The electrons are then forced through a circuit that generates an electric charge that can be stored in lithium batteries or sent directly to the train’s electric motor. The leftover part of the hydrogen molecule reacts with oxygen at the cathode and becomes the waste product – water.

The Hydroflex’s hydrogen tanks, fuel cell and batteries currently sit inside a passenger car, but the ultimate plan is to store them underneath the train in order to fit in more passengers. Hydrogen is of course extremely flammable, but on the Hydroflex it is stored in four secured high-pressure tanks, one of a range of measures to ensure passengers’ safety. 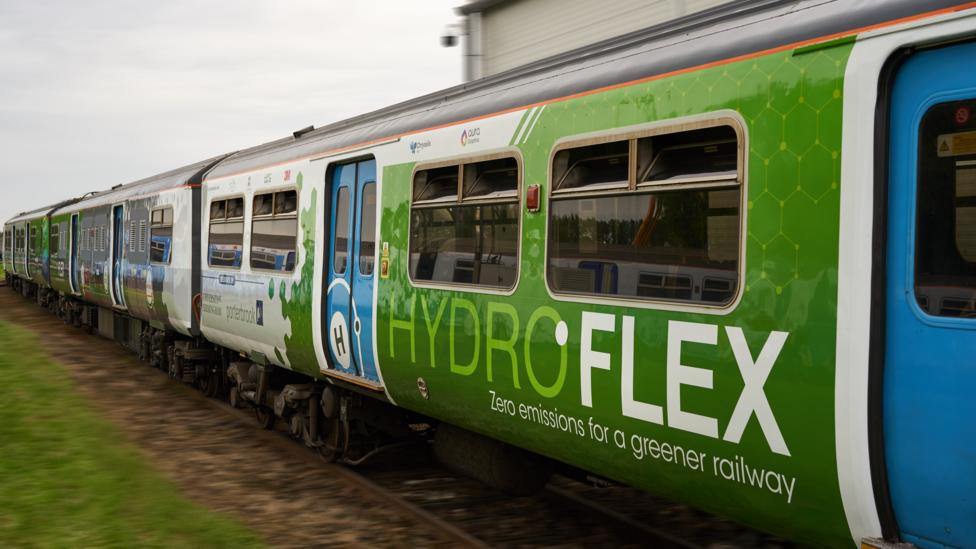 Hydrogen-powered trains like Hydroflex are emissions free – provided their hydrogen comes from a renewable source (Credit: University of Birmingham)

In the midst of the climate crisis, the demand for decarbonisation across transport industries has grown and the Hydroflex is just one product of that. In 2016, Germany unveiled the Coradia iLint, the world’s first hydrogen-powered train, which can run for 600 miles on a single tank of fuel – on par with the distances that traditional trains achieve on a tank of diesel. Engineers in the US are also working on bringing a version of a “hydrail” to the states. However, since rail is already among the lowest greenhouse gas emitters in transportation, it remains to be seen whether the value of a massive overhaul of rail systems will be worth it.

The UK already has 42% of its route miles electrified, according to the Institution of Mechanical Engineers, meaning those trains are ready to become zero-carbon, if they use a renewable source of power. A single line running to London from Hampshire is currently the only one in the world to run solely on solar power. However, the remaining 58% of UK track is not yet electrified, so diesel trains are still needed to keep those areas connected by rail.

Engineers working on the Hydroflex say that hydrogen-powered trains could be the answer to decarbonising the UK’s rail system without incurring the high cost of electrifying its track. According to an assessment of 20 lines in Britain and mainland Europe, electrifying a single kilometer of track can cost £750,000 to £1m ($965,000 to $1.3m). Hydrogen-powered trains are less expensive, because they don’t require massive track overhauls and they can be created by retrofitting existing diesel trains. This is especially beneficial in rural areas where there are more miles to cover, but fewer passengers to justify the expense. 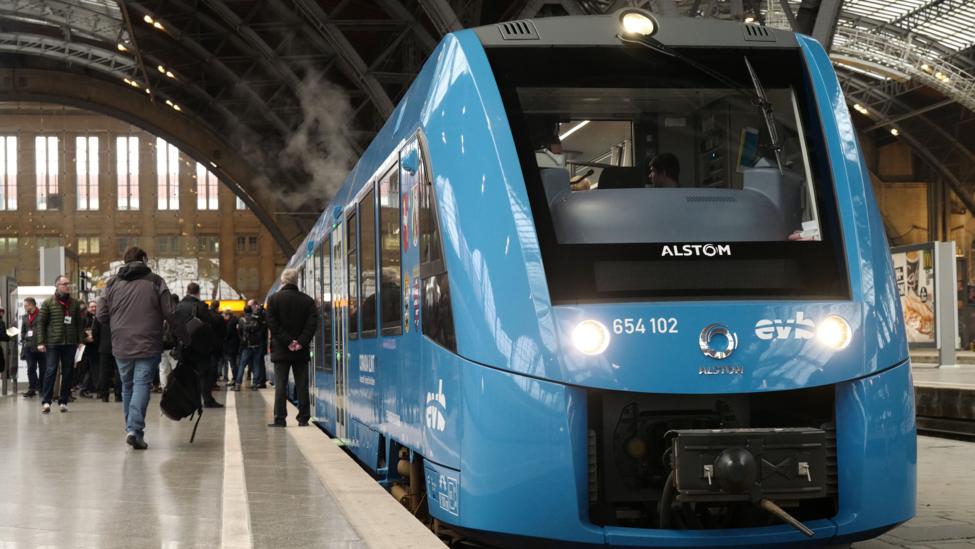 But hydrogen trains come with their own challenges.

“We store about 20kg of hydrogen, and that is enough to run the fuel cell for three hours,” says Stuart Hillmansen, professor at Birmingham University and leader of the Hydroflex project. As such, longer-distance journeys wouldn’t yet be feasible. Engineers at the University of Birmingham’s Centre for Railway Research and Education, Porterbrook’s partner on the Hydroflex, are working on ways to extend these limits.

And while hydrogen fuel cells can be as energy-efficient as diesel fuel, storing the gas can be a problem. “While hydrogen has a lot of energy per mass, because it is super light, it also takes up a lot of volume,” says Raphael Isaac, a researcher on fuel alternatives in rail at Michigan State University’s Center for Railway Research and Education. “With our current hydrogen storage technologies, hydrogen takes up significantly more space than [equivalent] fossil fuels do.” Even though hydrogen is typically compressed, it’s still not as efficient per unit volume as fossil fuels.

It’s also a space issue on trains. The fuel tanks on the Hydroflex, for example, have to be small enough to fit in an ordinary car that can pass through Victorian-era railway tunnels. These space constraints are one reason that Porterbrook chose to retrofit older train models with the hydrogen fuel power system, rather than construct entirely new vehicles like the Alstom did in Germany – the existing trains were already made to measure for the tunnels they had to pass through.

Hydrogen can be produced using other methods and from renewable energy sources, e.g. electricity from solar photovoltaics and electrolysis of water – Margaret S. Wooldridge

Even though the only direct waste product of hydrogen fuel is water, obtaining this form of power is not necessarily squeaky clean. “The challenge is, at the moment hydrogen is made as a byproduct of chemical processes,” says Helen Simpson, innovation and projects director at Porterbrook. The cheapest and most common method at present uses natural gas and high-temperature steam to produce hydrogen. Hydroflex runs on hydrogen produced from a combination of hydrogen produced using natural gas but its supplier, BOC, says it is looking into renewable options.

In order for hydrogen power to be truly sustainable, other methods of producing it that don’t rely on fossil fuels would need to become mainstream. “Hydrogen can be produced using other methods and from renewable energy sources, e.g. electricity from solar photovoltaics and electrolysis of water,” says Margaret S. Wooldridge, an aerospace engineer at the University of Michigan.

Electrolysis creates hydrogen by separating oxygen from water using an electric current. That current can be created using energy from renewable energy sources, but it has yet to be done outside of small test demonstrations. In order to be a truly green form of travel, the hydrogen would need to be created and stored using renewable energy sources, like off-shore wind farms and solar grids, rather than fossil fuels.

Another lingering environmental issue with hydrogen-powered trains is their use of lithium batteries. Currently, lithium processing takes a major toll on the surrounding environment. Mining one tonne of lithium requires 500,000 gallons of water, for example, and lithium mining has been linked to several measures of environmental degradation. Researchers hope that in the future it may be feasible to extract lithium from seawater instead using solar power, but the idea remains experimental. 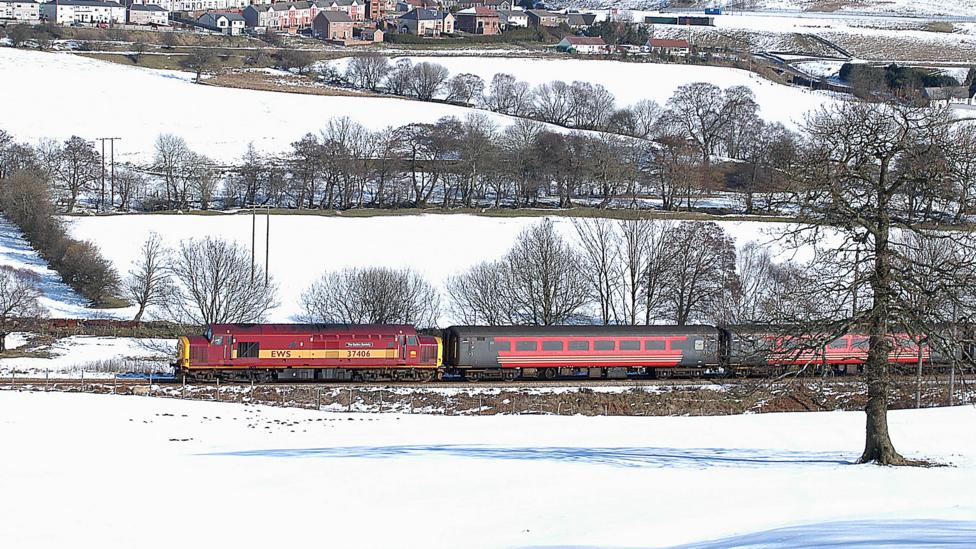 Hydrogen trains have potential to be particularly useful in areas with large distances to cover and lower passenger demand (Credit: Getty Images)

On the flipside, one major benefit of trains like the Hydroflex is their potential as a bi-mode train, meaning they can run on the electrified or conventional lines alike. So even though there is certainly an expense to building new hydrogen-powered trains (one of the Alstrom hydrogen trains costs approximately £5.19m), or retrofitting older ones, they are a flexible alternative while the majority of lines – especially rural ones – are yet to be converted to carry electric-trains.

“This is really the space where hydrogen fuel comes in as a real cost-effective and valuable alternative and delivers a low-carbon railway,” says Simpson. “Where we’ve got all these long routes that don’t have as much passenger demand, the cost-benefit of electrifying the lines isn’t there.”

There are benefits to passengers too. Hydrogen-powered trains, like electric trains, are also incredibly quiet compared to their diesel counterparts. And unlike electric trains, they are more resilient to network-wide disruption. “The shared electric infrastructure means that if there is damage to the infrastructure, the operations of many trains on a line will be impacted,” says Isaac. A hydrogen powered train could switch over to its fuel cells if the electricity lines went down, for example.

In countries where passenger trains are less popular, like the US, the ability to convert freight trains to hydrogen power will be key to making the case for mass producing them. A recent report sponsored by the US Energy Department and Federal Rail Administration notes that while powering freight trains with hydrogen is more technically challenging, it would ultimately have “the highest societal value”. Freight is, however, heavier than passengers, so it would require more hydrogen, or more efficiently compressed hydrogen, to carry the same load the same distance that diesel-fueled freight trains currently manage.

The engineers at Birmingham are currently working on more efficient ways to compress hydrogen, one of several hurdles Hydroflex still has to navigate. “There is a huge challenge in terms of developing the infrastructure to supply the hydrogen to the railway,” says Hillmansen. “This technology exists, but there will need to be an uplift in the scale of these operations.”

But the engineers emphasise that Hydroflex is not just a demonstration of hydrogen-power technology – it is set to become a viable commercial train, with mainline testing expected to begin in March or April this year. There a long list of approvals the train needs to pass in order to be considered safe for commercial use, but those involved in the project estimate Hydroflex will be fully up and running as soon as two years from now.

In the light of the UK’s ambition of doing away with diesel-only trains altogether by 2040, the Hydroflex’s forthcoming springtime test on the tracks makes it perhaps one of the most keenly anticipated arrivals in the country.