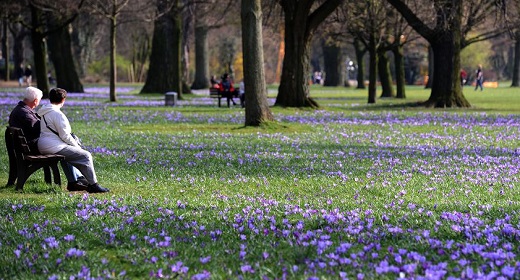 We instinctively know nature is the best prescription, but research is revealing how little time we need to set aside to reap the benefits.

In one study, published in the journal Frontiers in Psychology, researchers tried to identify the most effective “dose” of nature within the context of normal daily life. As more doctors prescribe nature experiences for stress relief and other health benefits — sometimes referred to as a “nature pill” — the study’s authors hoped to clarify the details of these treatments. More biophilia is generally better for us, but since not everyone can spend all day in deep wilderness, the study looked for a sweet spot.

“We know that spending time in nature reduces stress, but until now it was unclear how much is enough, how often to do it, or even what kind of nature experience will benefit us,” says lead author MaryCarol Hunter, an associate professor at the University of Michigan’s School for Environment and Sustainability, in a statement. “Our study shows that for the greatest payoff, in terms of efficiently lowering levels of the stress hormone cortisol, you should spend 20 to 30 minutes sitting or walking in a place that provides you with a sense of nature.”

A nature pill can be a low-cost, low-risk way to curb the negative health effects of urbanization and indoor lifestyles. To find the most efficient dosage, Hunter and her co-authors asked 36 city dwellers to have nature experiences of at least 10 minutes three times per week over eight weeks. (A nature experience was defined as “anywhere outside that, in the opinion of the participant, made them feel like they’ve interacted with nature,” Hunter explains.) Every two weeks, the researchers collected saliva samples to measure levels of the stress hormone cortisol, both before and after the participants took their nature pill.

The data showed that just a 20-minute nature experience was enough to significantly reduce cortisol levels. The effect was most efficient between 20 to 30 minutes, after which benefits continued to accrue but at a slower rate. Researchers in the United Kingdom who analyzed the routines of roughly 20,000 people came up with a similar prescription: 2 hours a week total spent in a park or woodland setting will improve your health.

Nature time doesn’t have to mean exercise, either

Those results dovetail with the findings of other studies, one of which found that spending 20 minutes in an urban park can make you happier, regardless of whether you use that time to exercise. That study was published in the International Journal of Environmental Health Research,

For this study, 94 adults visited three urban parks in Mountain Brook, Alabama, completing a questionnaire about their subjective well-being before and after their visit. An accelerometer tracked their physical activity. A visit lasting between 20 and 25 minutes demonstrated the best results, with a roughly 64 percent increase in the participants’ self-reported well-being, even if they didn’t move a great deal in the park. That last point is particularly positive, since it means most anyone can benefit from visiting a nearby park, regardless of age or physical ability.

The study’s co-author and another UAB professor, Gavin Jenkins, acknowledges the study pool was small, but its findings illustrate the importance of urban parks.

“There is increasing pressure on green space within urban settings,” Jenkins said in the statement. “Planners and developers look to replace green space with residential and commercial property. The challenge facing cities is that there is an increasing evidence about the value of city parks but we continue to see the demise of theses spaces.”

In another review published in Frontiers in Psychology, researchers at Cornell University examined the results of 14 studies that focused on the impact of nature on college students. They found that you might not even need the full 20 minutes to reap the benefits of some outdoor time. The studies showed that as little as 10–20 minutes of sitting or walking in nature can help college students feel happier and less stressed.

“It doesn’t take much time for the positive benefits to kick in,” said lead author Gen Meredith, associate director of the Master of Public Health Program and lecturer at the College of Veterinary Medicine, in a statement. “We firmly believe that every student, no matter what subject or how high their workload, has that much discretionary time each day, or at least a few times per week.”