4 Ways Exercise Is Good For Your Brain

by Jenn Savedge: The fitter you are, the stronger your brain will be as you age… 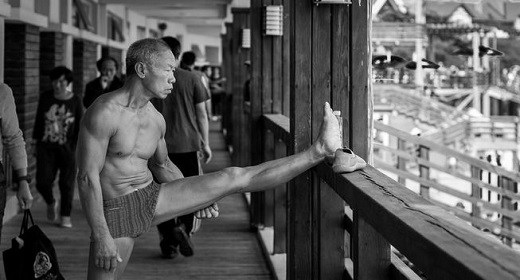 We already know that exercise is good for our bodies. Daily exercise fights the loss of muscle tone and flexibility that creeps up with age. And it turns out, it has the same fountain-of-youth effects on our brains.

Just like our bodies, our minds also become less flexible and nimble over time. We lose the ability to process new information or to switch quickly between mental tasks. But thanks to the work of researchers, we are learning more about why this happens and how exercise can push back against time and keep the brain young.

A study published in the journal Neurology Clinical Practice examined nearly 100 individual studies on exercise and brain function and discovered that exercising an average of 52 hours over six months is “associated with improved cognitive performance in older adults with and without cognitive impairment.” The type of exercises that are beneficial include aerobic, strength-training and mind-body exercises like yoga or tai chi.

A similar study published in the journal Scientific Reports also looked at the link between fitness and cognitive performance, this time controlling for underlying causes that could distort results, such as body weight, education and age. The group of German scientists studied a large database of MRI brain scans for patients an average of 30 years old. In a second round of testing, those volunteers walk as fast as they could for two minutes, followed by cognitive testing. Both tests revealed that a fitter body is associated with a fitter brain.

“It surprised us to see that even in a young population, cognitive performance decreases as fitness levels drops,” said team leader Dr. Jonathan Repple. “We knew how this might be important in an elderly population which does not necessarily have good health, but to see this happening in 30 year olds is surprising. This leads us to believe that a basic level of fitness seems to be a preventable risk factor for brain health.”

2. It can make you happier

Researchers found that exercise is one of the keys to how efficient the brain is. (Photo: VGstockstudio/Shutterstock)

The human body is meant to move. But listening to that urge to move has many trickle-down benefits — including making you happier and even keep depression and other mental health issues at bay.

Yet even though our brains are a big reason why we became so sedentary, inertia may harm them as much as any muscle. A growing body of research has begun to expose long-overlooked links between physical activity and mental health, suggesting exercise can significantly improve mood over time — maybe even as effectively as drugs.

A study in American Family Physician looked at 48,000 people — both walkers and runners — and found that high-energy exercise and frequent aerobic exercise three to five times a week reduced symptoms of depression more than less frequent or lower-energy exercise. In that study, the jury is still out on its effect on anxiety.

3. It allows you to use less brain power for the same task

Brain activity in younger people is more efficient than it is older people, but activities like running can wipe away those differences. (Photo: Michael Coghlan [CC BY-SA 2.0]/Flickr)

In previous studies, neuroscientists had looked at the brain activity of young people and compared it with the brain activity of people over 40. While completing cognitive tasks, younger participants had brain activity that was highly localized. Depending upon what they were thinking about, the scans lit up exclusively in either the right or the left prefrontal cortex.

The difference was that the older participants used far more brain power to complete the same tasks. No matter the activity, the older volunteers tended to use both hemispheres of their brain.

Researchers from Japan’s University of Tsukuba wanted to explore this idea further by looking at the effect of exercise on the weakening of the brain. They tested the aerobic capacity of 60 Japanese men between the ages of 64 and 75 who did not show any signs of dementia or other mental issues. Next, they looked at the brain activity of each man as he completed a mental task. They found that the fitter a participant was, the less brain activity he used to complete the tasks when compared with his out-of-shape peers. That research was published in NeuroImage.

4. It can expand your capacity for joy

Movement increases the number of dopamine receptors in your brain. (Photo: amfroey/Shutterstock)

Kelly McGonigal, Ph.D., is a health psychologist whose book, “The Joy of Movement,” explores why physical exercise is such a good antidote for what ails you. In an excerpt in Greater Good Magazine, she explains how exercise makes your brain more sensitive to joy.

Pointing to a randomized trial of adults in treatment for methamphetamine abuse, she explains the importance of dopamine receptors, which we lose as we age. After eight weeks of walking, jogging and strength training, these adults showed an increase of dopamine receptors. Even with people struggling with addiction, exercise can reverse the downward spiral of depression and antisocial behavior.

Just a few more reasons to lace up those shoes and get moving.