7 Major Stages Of Spiritual Awakening According To Sufism

by Hirok Das: Spiritual awakening knows no limitations of caste, creed or religion… 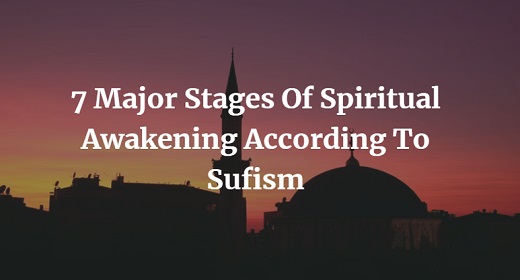 Any person in the world can experience the pleasure of union with the supreme power and attaining moksha (which is the last stage of spiritual awakening). However, many believe that the spiritual awakening experiences are restricted to certain religions and spiritual traditions, like Hinduism and Buddhism for example. This is certainly not the truth. Sufism, an esoteric path within Islam, also follows a variety of spiritual practices, leading to the awakening experiences. It showcases us the way to God through spirituality and emotions. The ancient practices and mystical teachings imparted by the Sufis have great level of importance for the spiritual seekers today.

Not just this, Sufism also describes the major stages spiritual awakening that explains the spiritual journey of the soul traveling from this world to a world that is closer to God. But, before discussing these stages of spiritual awakening, lets have a look at a story by Farid al-Din Attar (12th Century Sufi poet), who first described these stages. The story goes like this –

Once upon a time, there were thousands of birds who were eager to find a King for their Kingdom. Keeping a great level of determination in their mind, they set out for the journey. On their way, they found seven valleys, each having a different name and significance. When they began crossing the valleys, some birds died, some gave up, some returned to their kingdom and some made excuses. So, only 30 birds made through the journey. At the end of the journey, they realized that the king they were looking for is a reflection of themselves. Eventually, they become fully aware of the fact that all of them are the part of a whole.

This story, ‘Colloquy of the Birds’ is based on a belief that God is the totality of existence. He resides in us, and we reside in him. Hence, God is not separate from the universe, and we are not separate from God. The seven valleys, as described in this story poem are Talab, Eshq, Marifat, Istighnah, Tawheed, Hayrat and, finally, Fuqur and Fana. These valleys are actually the stages or path of awakening experienced by the soul.

Now that you know about the valleys or stages of spiritual awakening (as mentioned above), lets get acquainted with them in detail.

1. The Valley of Search

This is the first step in the journey of a spiritual seeker. According to Bahá’u’lláh – the writer of the book ‘Seven Valleys’ – one must not follow the path followed by his forefathers, and should cleanse his heart before embarking on this spiritual journey. Patience and ardor are the major keys to traverse this valley.

2. The Valley of Love

This stage symbolizes reason and love by smoke and fire. It states that where there is love, there is no room for reason; it simply vanishes. When a person gains inner sight, he is able to see the spiritual foundation of the visible world. He knows that he won’t be able to learn the importance of love, if he keeps seeing the world with the eyes of ‘reasons’. Hence, he completely dissolves reasons in the fire of love. At this stage, the seeker is completely enamored with the love and admiration for God.

3. The Valley of Knowledge

In short, his everyday life becomes his training ground for wisdom.

Ramaji, who is the creator of levels of consciousness map (LOC Map), described the first 3 stages (or valleys) as the preparatory phases for the seekers. This stages are all about karmic purification and letting go of metal baggage. In a sense, these stage are like springboards – ready to lift the seeker to the higher consciousness level.

4. The Valley of Unity

Here the unity between mind and heart develops and a certain kind of consciousness seems to take form. At this stage, the seeker has no ego and praises the Lord for all the creations in the world. His interest in life increases and enjoys everything he sees. He start seeing his beloved in everything, even in his enemy. Hence, the world becomes a place of splendor for the seeker, no matter what good or bad, life throws at him.

5. The Valley of Contentment

At this stage, the seeker comes across a feeling of contentment, that is, he becomes inwardly happy. He has also developed a certain indifference to all material things. The seeker understands that happiness cannot be obtained by material things. This stage is a mashup of a highly developed indifferent attitude and the joy and happiness derived from previous stage or valley.

6. The Valley of Wonderment

This stage is also known as the Valley of Amazement, wherein the seeker is amazed by the beauty of God. He keeps exploring the mysteries of God’s revelation, and continues to be astonished as he explores the mystery of creation one after the other. Also, he gets to know the cause of all causes, the reason of all reasons and understanding about what is beyond all things.

Because of all these inner understandings, the spiritual seeker often becomes a ardent devotee of God. The realization of this valley is kind of similar to that of the fourth valley, where the seeker continues to explore God in his creation. But, in the fourth valley (valley of unity), the seeker seeks God in his creation so that he could end his seeking. In his seeking, God remains an objection or goal to reach or grasp onto.

According to Ramaji, valley or stage four, five and six represents LOC 600, 700 and 800 respectively on the levels of consciousness map (LOC Map). Here are some interesting tidbits on these stage from the book “1000”

“The Valley of Unity stage is “equivalent of the LOC 600s. In this group you find people who have realized non-duality yet they are decidedly not the proverbial “happy camper.” They can still be intrigued by nihilism, chaos, anarchy or amorality.” (1)

“When you dig deeper into this Contentment level, the stage that corresponds to the LOC 700s, you find that this is a most fulfilling stage of the spiritual life. This is a blessed time……..It comes as no surprise that this spiritual stage, the 700s, is where the vast majority of the higher realizers stabilize. They do indeed find “contentment” at this stage.”(2)

“Stage six in the Sufi model is Wonderment, alternatively Astonishment and Bewilderment. It is here that we find those who attain to non-duality via a devotional path…. Terms like “wonderment” and “bewilderment” correspond to the Western mystical terminology of

“divine unknowing” and “dazzling darkness” for this LOC 800s stage. These Sufi terms also resonate with the emphasis on love by these realizers.” (3)

7. The Valley of True Poverty and Absolute Nothingness

This is the last stage referred to as the state of self-annihilation in God. Here, the seeker is completely empty of all concepts of a separate self that constitute the ego-mind. His individuality is lost in the depth of God conscientiousness, just like a water drop gets lost in water of a vast sea. Here, in this stage, there is no lover, only the beloved remains. Here, the worshipper gets lost, only the worshipped remains. Here, there is no God’s creation, only God remains.

This stage is aptly described by the mystic Kabir through his poem:

The seventh or the finally valley of the Sufi spiritual map corresponds to LOC 1000 in levels of consciousnesses (LOC) map. LOC 1000 is the final stage in LOC map

According to Ramaji, the seventh valley is the ultimate stage of spirituality because..

“……the Sufi descriptions of the final stage indicate, what is left is the final death. Now all notions of self and other, including that of God or the Divine, are let go of, dropped, dissolved, jettisoned, abandoned, discarded, transcended, seen through, lost and forgotten.” (4)

“Though the notion of discrete self was dissolved, the very subtle aspects of the mind, which include the cosmic mind, the mind of creation, maintenance and destruction, the mind of time and space, these various forms and shades and grades of the mind had to some extent remained intact and undetected. They are residuals of the mind. They are echoes of the “other.” (5)

“The arrival ……. into LOC 1000 enables the debut of the true “no mind.” This is the poverty, the death, the nothingness that the Sufi descriptions refer to for this final stage.” (6)

Each of the stages or valleys are considered to be one of the seven heavens. Through these valleys or heavens, we begin our journey into our souls, realizing the fact that it is the divine which lies at the center of our soul.

Here, you can find a brief overview of various maps of spiritual awakening and how they stack against Levels of Consciousness (LOC) Map. As you can see, the various stages of Sufi spiritual map corresponds nicely with LOC map.