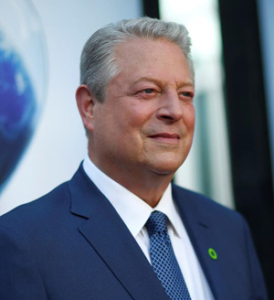 Quote
“As many know, the Chinese expression for “crisis” consists of two characters side by side. The first is the symbol for “danger,” the second the symbol for “opportunity.”

Truth to Power: Your Action Handbook to Learn the Science, Find Your Voice, and Help Solve the Climate Crisis

An Inconvenient Truth: The Crisis of Global Warming

Al Gore, born on March 31, 1948, in Washington, D.C., served in both the House and Senate. He lost his bid for the Democratic presidential nomination to Michael Dukakis in 1988, but was President Bill Clinton’s successful running mate in 1992 and again in 1996. In his 2000 presidential campaign, Gore won the popular vote, but eventually conceded defeat to Republican George W. Bush.

Environmental Activism
On December 10, 2007, Gore accepted a Nobel Prize for work on global warming. In accepting the prize, he urged the world’s biggest carbon emitters, China and the U.S., to “make the boldest moves, or stand accountable before history for their failure to act.” Gore shared the prize with the Intergovernmental Panel on Climate Change (IPCC) for sounding the alarm over global warming and spreading awareness on how to counteract it.

“We, the human species, are confronting a planetary emergency – a threat to the survival of our civilization that is gathering ominous and destructive potential even as we gather here,” Gore said at the gala ceremony in Oslo. He donated his share of the $1.6 million award that goes with the prize to a new non-profit organization, now known as the Climate Reality Project, devoted to taking action on the climate change problem.

Gore published his latest books, The Future: Six Drivers of Global Change (2013) and Earth in the Balance: Forging a New Common Purpose (2013). He saw years of work come to fruition in 2015 with the launch of the Deep Space Climate Observatory satellite, nicknamed DSCOVR, in 2015. DSCOVR has a special camera that “will monitor specific wavelengths that alert scientists to the presence of certain materials like ozone, aerosols, and volcanic ash,” according to a statement on Gore’s official website.

In 2016, Gore appeared at a TED conference in Vancouver, Canada. His talk was called “The Case of Optimism on Climate Change.” He pointed to the decreasing cost associated with renewable energy and the recent agreement reached at the 2015 United Nations Climate Change Conference as reasons for a more positive outlook for the future.

Gore has been linked to fellow environmentalist and Democratic Party supporter Mary Elizabeth Keadle. He divides his time between homes in Nashville, Tennessee, and San Francisco, California. Gore has four adult children with his first wife Tipper. The couple separated in 2010 after 40 years of marriage.

Al Gore: Where Do I Find Hope

Al Gore At Cannes: ‘Trump Cannot Stop The Solutions To The Climate Crisis’

Al Gore: The Case For Optimism On Climate Change (TED 2016)

Al Gore – Can We Protect The Planet When It’s Not In The Interests Of The Powerful?