by Michael D’estries: As the coronavirus pandemic takes hold and triggers lockdowns in major urban centers… 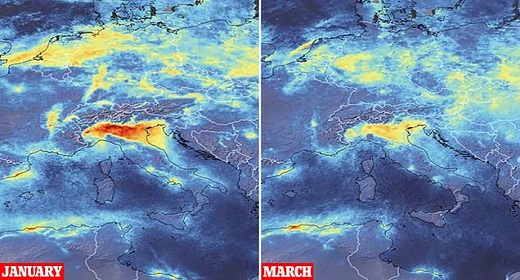 researchers studying air pollution data are recording significant improvements in air quality levels. The shift is so dramatic that some believe these short-term reductions could end up saving many more lives than are lost to the virus itself.

“These are quite fascinating times,” François Gemenne, director of The Hugo Observatory, an environmental research center, said during an appearance on France 24’s The Debate. “What surprises me most is that the measures that we are ready to take to face this coronavirus are much more severe than the measures we would be ready to take to face climate change or atmospheric pollution.”

According to the World Health Organization, around 91% of the world’s population live in places where air quality levels exceed acceptable limits. Globally, this results in an estimated 4.2 million premature deaths annually, according to 2016 statistics. 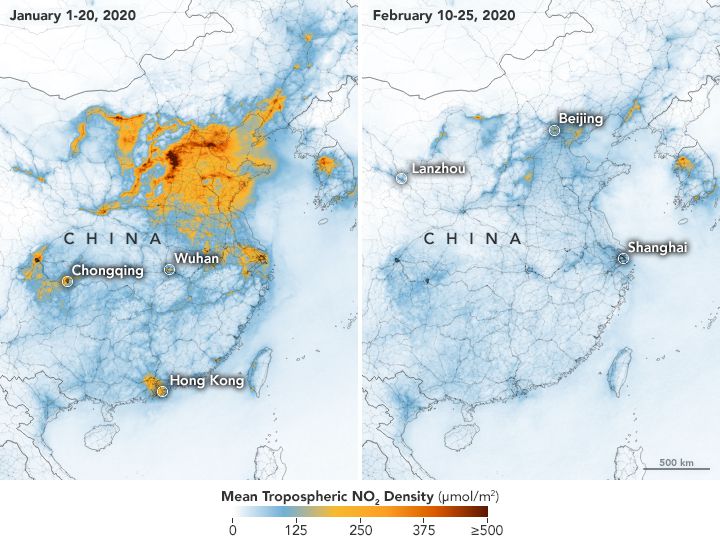 Levels of nitrogen dioxide, a trace gas associated with industry, before and after the coronavirus lockdown in China. (Photo: NASA/ESA [public domain])

Recent data from the European Space Agency’s (ESA) Copernicus Sentinel-5P satellite has shown a marked reduction over Italy in the amount of nitrogen dioxide, a gas produced from road traffic and other fossil fuel combustion processes, during the country’s nationwide lockdown.

“Although there could be slight variations in the data due to cloud cover and changing weather, we are very confident that the reduction in emissions that we can see, coincides with the lockdown in Italy causing less traffic and industrial activities,” Josef Aschbacher, ESA’s Director of Earth Observation Programmes, said in a statement.

The lack of activity is being revealed in other surprising ways as well. Residents of Venice have noticed how much clearer the water has become now that the city is in lockdown. Members of a Facebook group called Venezia Pulita (which translates to Clean Venice in English) have been uploading photos of the almost unrecognizably peaceful city. Fish have been seen in the canals, which is unusual for waters normally full of sediment churned by so much canal traffic, reports CNN. In some cities, animals are timidly exploring new areas, especially in urban areas.

This follows an earlier report from NASA and the ESA, showing a similar phenomenon over China during the period Jan. 1, 2020 to Feb. 25, 2020, which you can see in the graphics above.

It’s a trend that is spreading. In the United States, greatly reduced traffic in major hubs like Los Angeles and New York City is reducing the amount of carbon monoxide in the air and redefining rush-hour commutes.

“We’ve never seen anything like the drop we saw starting last Friday,” Roisin Commane, an assistant professor at Columbia who conducts the air-monitoring, told The New York Times. “We often see dips during weekends or over holidays, but this is completely different.”

So just how significant are these short-term drops in air pollution? According to Stanford researcher Marshall Burke, this drop — down a quarter to a third in some places compared to last year’s levels — has likely saved the lives of 4,000 kids under 5 and 73,000 adults over 70 in China. While he adds that it’s “foolhardy” to conclude that pandemics are good for health — in particular without factoring the negative social and economic impacts such disruptions cause — he does note that such data is revealing for other reasons.

“The calculation is perhaps a useful reminder of the often-hidden health consequences of the status quo, i.e. the substantial costs that our current way of doing things exacts on our health and livelihoods,” he writes.