by Pir Vilayat Khan: Meditation is the art of moving back and forth between two perspectives—the human and the Divine 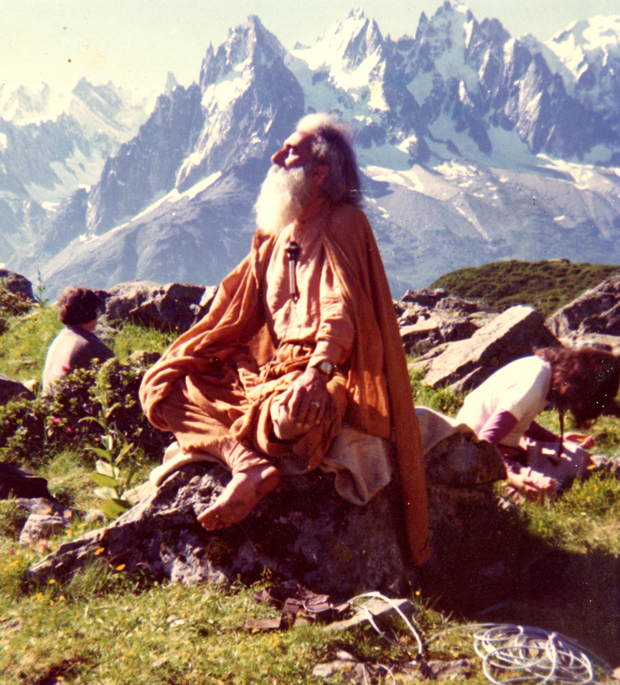 —downplaying one level in order to highlight the other. Eventually, we learn to extrapolate meaning from the synthesis of these different levels. This state I call awakening in life. For the culmination of the soul’s journey is not just returning to its original state. Instead, it is how the soul has evolved through it’s passage on earth: what meaning has been extracted from its experiences; what archetypal qualities have unfolded as a result of the immense difficulties it has endured; and the unique way each soul’s unfoldment has contributed to the evolution of the Universe itself.

Spiritual awakening is shifting from one perspective to another, until we finally glimpse meaningfulness where our mind could not perceive it before. The higher and broader the perspective, the more inclusive it is.

Like St Francis, we cannot free ourselves from our identification with our individual self unless we open ourselves to the infinite dimension of the power of the sacred.

To awaken in life, we first must awaken beyond life. As the radiation of the sun powers the unfurling of the seed into a plant, so, too, does the light of spiritual realization alter modes of thinking, dramatically restructuring the formation of the ego. As much as one might wish to change one’s individual personality, it can only truly be transformed under the impact of illuminated insights into the meaningfulness of life. Then, one can begin to see one’s circumstances in the light of the Divine Being—one’s individual intention is corrolated with the Divine Intention, one’s personal understanding is illuminated with Divine Understanding, and one’s personal love is suffused with Divine Love.

The drama of life is always woven through with emotions of despair or anger against the incongruity and unfairness of circumstances, as well as exhaustion from the never-ending quest just to survive. As a result of this stress, the emotions dry up and the heart burns out, extinguishing the flame of our values and ideals. Thus the important question becomes how to feel once again; how to resonate both with the suffering and the joy of the human condition without being so overwhelmed by the enormity of the world’s problems that we lose hope.

The task is to watch not only your emotions but also the effects of the emotions of others on us and ours on others. The spectrum of emotion ranges from the extreme, vulgar emotions of violence and lust to anger, jealousy, and resentment, to more ordinary emotions such as the desire for recognition, empowerment, status, and possessions. At the far end of this spectrum are the rare emotions of sacredness experienced during worship or during moments of prayer or meditation. This is the emotion of the soul.

Part of the task of awakening conscience is to sensitize one’s heart to the more sublime and exalted values of the soul and spirit. Our hearts become so bruised and hardened that we begin to lose the capacity to feel the higher ranges of the spectrum of emotion. Cultivating these emotional values, rather than killing them with cynicism and mistrust, leads us into a transfigured world that lies just behind the physical world. This leads to a perspective that attunes our feelings to the emotions of that world—the emotions of the soul.

The doorway to experiencing the emotion of the soul is through the child within us—for it is the pure heart that leads the way to a higher attunement of consciousness. The secret to entering the consciousness of the child within is to remember the state we were in before our birth; this will kindle heavenly emotions within us. Returning to the state of the child means to become stripped of all guile, manipulation, intrigue, and deception.

We’ve become so jaded and sophisticated that we’ve lost the sacredness of our being. Thus it is critical that we place more value on those rare moments when we feel inspired or uplifted. It is during such moments that something of the heavens comes through. This does not mean that we must renounce the wisdom we have gained as we grow older; in fact, the great skill of life is to be able to maintain the innocence of a child in one’s heart while at the same time possessing mastery and control. The combination of these two modes of being is a great art.

Achieving such a synthesis of qualities is an ongoing, lifelong process. None of us is immune from being hurt in life; every day, we hand our heart over to people who challenge us, saying, in effect, “Are you still so naive as to believe in a spiritual reality?” or again, “If you don’t do what I want you to, I’ll break your heart.” If we make a gift of ourselves out of love, we become vulnerable. Yet, somehow, just like the child who continues to trust no matter how many times he is rejected or rebuffed, the goal is to go on trusting in life itself. The miracle is that then a foundation of trust begins to build up; as people value the trust we give to them, they begin to feel safe with us. When we have attained this spiritual realization of the heart, then we will have developed a heart-power that reaches right into the souls of people. For, as I have experienced myself, it is our suffering, our broken heart, that gives us insight into the suffering of others. Not pity but sharing in the suffering ourselves because we, too, have known sorrow and loss. The extraordinary thing is that the insight of the heart is the magic that unleashes talents and potentialities within people that have been blocked as a result of their suffering.

Finally, it is the realization and knowledge of the heart that will enable us to reconcile the irreconcilables of our life: to honour our sadness, while at the same time experiencing joy. Many times throughout my life I have had a vision of a dervish who is dancing on thorns with a crown of thorns on his head, and yet who is in a state of ecstasy. Through this vision, I understood that despite the darkness of the moment when He hung dying on the cross, alone and abandoned, Christ was in a state of supreme beatitude—a state of consciousness which could never have been attained if things had occurred the way people thought they should have. Indeed, behind the Crucifixion of Christ on earth, a jubilant coronation in the heavens was taking place. In the same way, a resurrection is taking place behind the crucifixion of our own suffering—the joy of being released from the limitations of our human condition.

And now, I will close with several mottos that have formed a perennial refrain. One is from my father, Hazrat Inayat Khan, who said to remember that a defeat can aver itself to be a victory, and that a victory can aver itself to be a defeat. So, what I would say to you is this: Don’t judge yourself by how externally successful you have been. In the same way, don’t denigrate yourself if you have not lived up to your expectations—furthermore, you cannot expect justice in the world nor can you always achieve the position that is rightfully due you. In this regard, the opinions of others are relative—so be careful not to make your self-esteem dependent upon the opinions of others.

An even deeper motto is the phrase of the Sufi Shams of Tabriz, who said, “The man of God is a palace in a ruin.” This means that the heart broken by life is subjected to the inroads of the malignant beings. The old violins and cellos of the eighteenth century, however, are a wonderful exemplification for the Divine music that comes from the broken heart. More than two centuries old, these instruments have fissures and breaks—and yet they sound much better than new ones. There is a French phrase for this condition that translates, “They have a wound in their soul.” The reason why clarinets and oboes have different tones is because they have flaws. If they were perfect, they could not contribute their sound together with that of other instruments to the richness of the orchestra.

So if you think that you are handicapped in some way, you will find that your compensation for it is a quality that you wouldn’t have cultivated if it were not for that innate flaw. Indeed, one is never so strong as when one is broken. When you grasp that mystery, then you will be able to see how what seemed like a loss or a defeat is instead a victory, and that how you are broken is where you are whole. That was the message of Christ.

I have tried, in all my teachings, to bring forth a message of light. I sincerely hope that it will help you in some way. Especially if you are going through a dark night of the soul, remember that it is because you are not aware of your own light—and it is light that will show you the way. And while I hope that some of the skills and meditations that I have presented will be helpful to you, they are useful only as a ladder in attaining the essential objective—awakening consciousness and conscience in everyday life.