Gurdjieffian Thought in the New Age

By James Westly (excerpt from The Work, Chapter One: The Terror of the Situation) George Gurdjieff and Peter Ouspensky left behind them a rich legacy of practical thought. 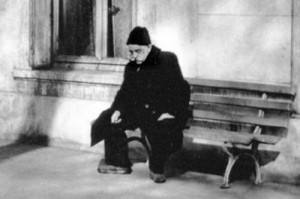 The ideas they brought to the western world did not originate with them, nor did they originate from any man, but are, rather, universal principles that have been widely disseminated upon this planet in a variety of languages and forms, and emanate from a higher source. As a young man, Gurdjieff traveled to the ancient seats of wisdom in the East in search of esoteric schools. As a middle aged man, he returned to the West, seemingly sent by his teachers to bring these ideas back to the West where they had been lost.

Peter Ouspensky, a Russian philosopher, lecturer, and journalist, met and studied with Gurdjieff in Russia just prior to the Bolshevik Revolution. Together Gurdjieff and Ouspensky, along with a group of their students, escaped the chaos of the revolution to Western Europe and the United States. Here they both spent the remainder of their lives teaching these ideas to those who would listen.

The coming together of Gurdjieff and Ouspensky was the joining of the East and the West. Gurdjieff was a magician, a mystic, an exotic who had deeply penetrated the symbolical, allegorical, metaphorical languages of the East. Ouspensky was a highly accomplished Western intellectual. Through Ouspensky the allegorical symbolism of Eastern thought was translated into the logical, rational, ultimately psychological language of the West. In the process the teachings of a wide variety of Eastern thought were synthesized into a single system, called The Fourth Way. This was published in three books: The Psychology of Man’s Possible Evolution, containing five introductory lectures; In Search of the Miraculous, the complete teaching interwoven into the story of Ouspensky’s eight years as Gurdjieff’s student; The Fourth Way, a compilation, by topic, of the notes taken from Ouspensky’s twenty years of teaching in England.

Much has changed on the planet since the time of these two extraordinary men. The minds and hearts of many people have been and are being expanded. Old wisdom has been resurrected and is readily available on the shelves of Metaphysical book stores, alongside much new information, revealed through a wide variety of sources. None of these developments in any way invalidates the knowledge transmitted to us by Gurdjieff and Ouspensky. In my opinion, what is happening now requires the revitalization of the principles given us by these two men. It is essential that the New Age Movement incorporate these principles into its process in order that it remain grounded and practical.

Many writings and teachings that we encounter today open us up to new ideas and possibilities without giving practical methods as to how to attain such possibilities. They serve the purpose of expanding our thought and awareness. They give us more to talk and think about. Few, though, directly address what it is within us that keeps us from a direct experience of whatever it is that is their focus,be it memory of past lives, the ability to focus energy through a crystal, or simply living in the moment.

A sincere evaluation of one’s capacity to live in the moment will reveal that it is the singular most difficult thing to do. What makes this so? How is it that we can focus our being into the present for only brief seconds, that we feel connection sporadically, if at all, and what does connection mean anyway?

Are the people that write about such things different than we are, do we need some genetic adjustment to experience the miraculous? Are mystical experiences available or possible for an ordinary person? The answer to all this is yes, if you are willing to work for it. There is no panacea, no quick fix, no instant gratification, no pill (as we discovered in the drug years), no recipe that will permanently elevate anyone into a state of Enlightenment.

It is possible to expand the brief moments we experience of a more awakened state if we are willing to undertake a deep examination of ourselves and our situation in order to uncover the barriers that exist in our inner world. These prevent a more profound awareness of who we are and what our condition is. This journey cannot be lightly committed to, nor are there any guarantees. It is not a short trip, but rather one that lasts a lifetime and beyond. Much of it is potentially unpleasant, as we each have many misconceptions about ourselves. Yet to perceive them and release them is a profoundly joyous experience. The first step on this adventure is to look at things as they are.

HUMANITY AS WE FIND IT

Much has been said in judgement concerning the human condition. It is not the intent of this beginning to heap more onto this pile, but to simply state some clear facts.

Our civilization now stands at the pinnacle of its development and, simultaneously, on the brink of its own destruction. We have created a technology that has launched men into space, invented machines to do our ordinary thinking, established speed-of-light visual communication globally, enabled high speed individual transportation, penetrated the secrets of the atom, fashioned artificial hearts and more. An extraordinary list. We also face massive drug addiction, wide spread political corruption, accidental nuclear annihilation, sexually transmitted incurable fatal diseases, starvation, guerilla warfare, terrorism. An equally long and extraordinary list. The individual living in this environment faces a wide range of opportunities and temptations, and it is frequently not altogether clear which is which. The ordinary person living in today’s over-stimulated culture is driven into numbness and cynicism by the demands of our high pressure cultural milieu.

Yet, in the midst of what seems to be hopeless decadence, a different direction has appeared. More and more people living in Western civilization are becoming interested in nonmaterialistic pursuits. This development has been called the New Age Movement, but is actually a return to the ancient, timeless pursuit of Enlightenment. The only difference is that in ancient times only a few could afford such inquiries. Now, due to our technological advances, the pursuit of Enlightenment is something the ordinary citizen can take up. Thus it is that there is a rapidly growing subculture that is setting aside the values connected to what some call “The Illusion”, and is taking up the search for Truth.

Initially this search may be driven by a fascination for the mysterious. The mind expands to accept new (old but lost) concepts concerning the nature of reality, such as reincarnation. On a deeper level, the search is motivated by a dissatisfaction with what “The Illusion” seems to offer, but does not fulfill. Our technology has given many the opportunity to experience some, if not almost all, of their materialistic desires. For many, the realization and fulfillment of their dreams has left them feeling empty, and has lead them to feel that there must be more to life. This feeling fuels the awakening of a drive to find deeper levels of meaning in the life experience.

The search may continue for some time, as the seeker wades through the wide variety of literature, techniques, and seminars available. These pursuits can be addictive and, unless the seeker finds a more permanent group of people to work with and a body of knowledge that leads deep into his or her inner world, they may find the mind filled with new words and ideas, but life just as empty as before. No matter where we go or what we do we take ourselves with us. We continue to chart courses for ourselves into new territories only to find ourselves, at a time and a distance later, right back at square one.

When this occurs and we recognize it, we are profoundly struck by the “terror of the situation”. Here is where there is an opening for us to realize that, although we “think” we are in control of our lives, we actually are not. When we experience our own helplessness in the face of the “Wheel of Life”, then we are ready to work. Then, maybe, something new can happen. Now the stage is set for the miraculous.

It is necessary to say here that everything that comes from this point on is not to be believed. The greatest error we humans make is to believe blindly what some authority proposes. Many of us, for instance, blindly believe almost anything that is published in print. It is equally imperative to not disbelieve anything that is proposed. Cynicism is as damaging to the human psyche as naivete. A third alternative is this: to hold what is given in a neutral place with