How To Find Your Bliss: Joseph Campbell On What It Takes To Have A Fulfilling Life

by Maria Popova: “You have to learn to recognize your own depth.” 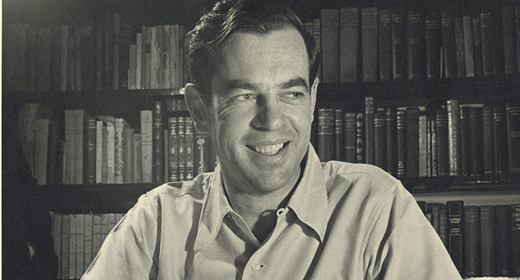 In 1985, mythologist and writer Joseph Campbell (March 26, 1904–October 30, 1987) sat down with legendary interviewer and idea-monger Bill Moyers for a lengthy conversation at George Lucas’s Skywalker Ranch in California, which continued the following year at the American Museum of Natural History in New York. The resulting 24 hours of raw footage were edited down to six one-hour episodes and broadcast on PBS in 1988, shortly after Campbell’s death, in what became one of the most popular series in the history of public television.

But Moyers and the team at PBS felt that the unedited conversation, three quarters of which didn’t make it into the television production, was so rich in substance that it merited preservation and public attention. Shortly after the broadcast, the full transcript was published as The Power of Myth (public library) — a dimensional discussion of Campbell’s views on spirituality, psychological archetypes, cultural myths, and the mythology of self. The book is nothing short of secular scripture — a trove of wisdom on the human experience in the canon of such rare masterworks as Thoreau’s journals, Simone Weil’s notebooks, Rilke’s Letters to a Young Poet, and Annie Dillard’s Pilgrim at Tinker Creek. As Moyers notes in the introduction, Campbell saw as the greatest human transgression “the sin of inadvertence, of not being alert, not quite awake.” This, perhaps, is why the most rewarding part of the conversation deals with the dictum that has come to encapsulate Campbell’s philosophy on life: “Follow your bliss.” Decades before the screaming tyranny of work/life balance reached its modern crescendo, Campbell put a sympathetic ear to the soul’s cry and identified with enormous elegance and precision the root of our existential dissatisfaction. He tells Moyers:

If you follow your bliss, you put yourself on a kind of track that has been there all the while, waiting for you, and the life that you ought to be living is the one you are living. Wherever you are — if you are following your bliss, you are enjoying that refreshment, that life within you, all the time.

Discerning one’s bliss, Campbell argues, requires what he calls “sacred space” — a space for uninterrupted reflection and unrushed creative work. Far from a mystical idea, this is something that many artists and writers have put into practice by way of their peculiar workspace rituals, as well as something cognitive science has illuminated in exploring the psychology of the perfect daily routine. But Campbell sees past the practical rituals of creativity and into the deeper psychic and spiritual drivers — that profound need for a “bliss station” into which to root ourselves:

Our life has become so economic and practical in its orientation that, as you get older, the claims of the moment upon you are so great, you hardly know where the hell you are, or what it is you intended. You are always doing something that is required of you. Where is your bliss station? You have to try to find it.

Two centuries after Kierkegaard admonished against the cowardice of the crowd, Campbell argues that we often lose our way on the path to our bliss station as society’s limiting notions of success peer-pressure us into unimaginative, fail-safe pursuits:

It’s characteristic of democracy that majority rule is understood as being effective not only in politics but also in thinking. In thinking, of course, the majority is always wrong.

The majority’s function in relation to the spirit is to try to listen and to open up to someone who’s had an experience beyond that of food, shelter, progeny, and wealth. Illustration from ‘Herman and Rosie’ by Gus Gordon. Click image for more.

Opening up to those more meaningful dimensions of bliss, Campbell insists, is simply a matter of letting your life speak:

We are having experiences all the time which may on occasion render some sense of this, a little intuition of where your bliss is. Grab it. No one can tell you what it is going to be. You have to learn to recognize your own depth.

In a sentiment that calls to mind Mark Strand’s beautiful meditation on the poet’s task of bearing witness to the universe, Campbell points to poets as the most attentive of listeners to the language of bliss:

Poets are simply those who have made a profession and a lifestyle of being in touch with their bliss. Most people are concerned with other things. They get themselves involved in economic and political activities, or get drafted into a war that isn’t the one they’re interested in, and it may be difficult to hold to this umbilical under those circumstances. That is a technique each one has to work out for himself somehow.

But most people living in that realm of what might be called occasional concerns have the capacity that is waiting to be awakened to move to this other field. I know it, I have seen it happen in students.

Looking back on how he arrived at this notion of finding one’s bliss, Campbell touches on the crucial difference between religious faith and secular spirituality:

I came to this idea of bliss because in Sanskrit, which is the great spiritual language of the world, there are three terms that represent the brink, the jumping-off place to the ocean of transcendence: Sat, Chit, Ananda. The word “Sat” means being. “Chit” means consciousness. “Ananda” means bliss or rapture. I thought, “I don’t know whether my consciousness is proper consciousness or not; I don’t know whether what I know of my being is my proper being or not; but I do know where my rapture is. So let me hang on to rapture, and that will bring me both my consciousness and my being.” I think it worked.

The religious people tell us we really won’t experience bliss until we die and go to heaven. But I believe in having as much as you can of this experience while you are still alive.

If you do follow your bliss you put yourself on a kind of track that has been there all the while, waiting for you, and the life that you ought to be living is the one you are living. When you can see that, you begin to meet people who are in the field of your bliss, and they open the doors to you. I say, follow your bliss and don’t be afraid, and doors will open where you didn’t know they were going to be. The most uncomfortable but essential part of finding your bliss, Campbell argues, is the element of uncertainty — the willingness to, in the timeless words of Rilke, “live the questions” rather than reaching for the ready-made answers:

The adventure is its own reward — but it’s necessarily dangerous, having both negative and positive possibilities, all of them beyond control. We are following our own way, not our daddy’s or our mother’s way… Life can dry up because you’re not off on your own adventure.

Complement The Power of Myth, the intellectual and spiritual enormity of which cannot be overstated, with David Whyte on how to break the tyranny of work/life balance, Roman Krznaric on how to find fulfilling work in the modern world, and Parker Palmer on how to let your life speak, then revisit the heartening and rather assuring story of how Van Gogh found his purpose after years of floundering.