by Amy Westervelt: The coronavirus reveals in stark terms the limits of our personal choices to affect climate change… 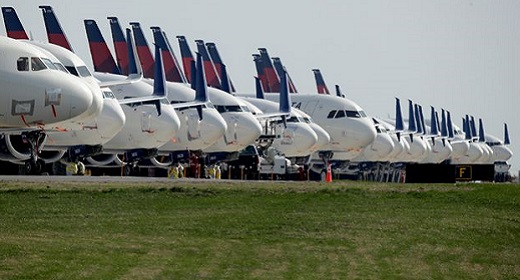 Absent any sort of end in sight to the COVID-19 pandemic — or even the hint of an exit strategy from U.S. leaders, aside from a willingness to sacrifice lives on the altar of capitalism — a lot of people are, understandably, looking for a silver lining.

Searching for something, anything, to feel optimistic about, some have landed on environmental gains. They point to cleaner air, clearer water, the reappearance of wild animals in urban settings and projected emissions reductions as evidence that we humans can benefit nature if we just try. “See,” these thought leaders tell us, “individual actions do matter!”

We have seen temporary environmental benefits from the current lockdown. Emissions are projected to fall by between roughly 5% and 8% this year. But they are just that: temporary.

Carbon dioxide emissions reductions are a result of global lockdowns ― not the result of considered environmental policies ― and as such they have required huge, unsustainable levels of sacrifice.

And even these gains still deliver nowhere near the level of reductions climate scientists say we need to reach net zero CO2 emissions in less than 15 years and to avoid the most catastrophic effects of climate change.

The fall in emissions we’ll see in 2020 will be a blip compared to the carbon dioxide we have emitted since the start of the Industrial Revolution, 100 years’ worth of runaway emissions that have locked us into a certain amount of climate change.

To reach net zero by 2030 — or even 2050, the deadline preferred by most oil companies — we’d need to see the high end of this year’s projected emissions reductions every single year.

We have long been told that individual actions are key to solving the climate crisis. Put another way, carbon calculators, marketing campaigns and even major news outlets have convinced us that we are the ones to blame for climate change because we buy things, we have kids, we fly and we drive and we are, by nature, shortsighted.

But the emissions reductions we are seeing now are not the result of individual action at all, but rather of policy and collective action. People are following shelter-in-place guidelines dictated by federal, state and local agencies. They’re not making a choice.

Because here’s the thing: despite what the fossil fuel industry has been saying for decades, theirs is not in fact the only demand-side market in the world. Yes, we consume energy via transportation and heating or cooling our homes, or at the corporate level through various industrial processes. But the fossil fuel industry also regularly looks for and creates new markets for its wares.

Natural gas is a perfect example. Government and financial policies helped drive a natural gas boom in the U.S., pushed in part by fossil fuel companies and in part by nationalistic politics. When the mantra of more, more, more led to a glut, and fossil fuel use for transportation began to drop, the industry did not respond to that demand signal and reduce production. Instead, it looked for a new market.

The industry found it in single-use plastics. For the past two years, oil majors have been pointing to ethane cracker facilities — which use a byproduct of gas extraction to make plastics — and crude-to-plastics factories as a new revenue stream, never mind that pumping out single-use plastics represents yet another environmental scourge.

Even if consumers make very different choices and get extremely good at conserving energy, fossil fuel companies will find ways to stay in the carbon business as long as they possibly can.

Even the policies keeping people at home and planes on the ground are beginning to buckle under a modest amount of pushback. Industry groups and CEOs from the fossil fuel industry and the tech sector are rallying around the idea of “opening the economy,” whether there’s any sort of public health plan in place or not.

Meanwhile, the long-term policy decisions being made right now run counter to any hope for large-scale climate action.

We are seeing the fossil fuel industry implode. Demand has dropped precipitously, and the Russia-Saudi oil price war has driven prices to the lowest they’ve ever been. In many cases, the reasons for the industry’s weakness predate the coronavirus. Take the endless loans propping up shale gas, which companies cannot pay back, for example. Yet governments and banks around the world are rushing to prop up fossil fuel companies with a seemingly endless stream of loans, subsidies, permits and policy favors.

With environmental regulations on pause in many countries, oil and gas producers are operating even more carelessly than usual, potentially unleashing more methane than usual. (Methane is a greenhouse gas exponentially more potent than carbon dioxide and generally ignored in all the articles celebrating the great emissions reductions of 2020.)

Then there are the new laws criminalizing protest around oil and gas infrastructure ― which will make it that much easier to construct new pipelines ― and the policies aimed at making it more difficult for regulators to base environmental policy decisions on science. These are decisions that could lock us into the status quo, or worse, for years, whether a majority of individuals agree with them or not.

the total lack of political will at the moment to transition away from a carbon-based economy will greatly constrain the choices individuals have to make.

Individual action is usually discussed in the context of consumer behavior, as though our only power as individuals lies in how we spend money.

It’s a very convenient trope for industry. If both the problem and the solution are up to individuals, their hands are clean. It neatly sidesteps questions about the influence of decades and billions spent shaping American minds in their favor— from classrooms to Congress.

A focus solely on consumer behavior also ignores a more fundamental individual power: the power of the people to act, to vote in their own interests, to organize and agitate for what they want, to revoke the social license of polluting industries, to push for local action that spurs broader change.

Sometimes that sort of action does veer into the consumer realm, too. The decision of high-profile climate activists not to fly, for example, can encourage others to fly less. But those actions are only really effective when they feed into broader collective efforts toward systemic change.

Let’s stick with flying for a moment. It’s the combination of no-fly activism, legal efforts to block new runways at airports and policy proposals that either regulate or put a price on emissions that could really put a sustained dent in airline emissions.

There may well come a point in time where no amount of government intervention will save the fossil fuel industry, and that time may not even be far off, but the total lack of political will at the moment to transition away from a carbon-based economy will greatly constrain the choices individuals have to make in the near term.

Relying on a handful of people who care enough about climate to make sacrifices to solve the climate crisis is akin to hoping that if 20% of people wear masks and self-quarantine, we’ll put this pandemic to rest. It doesn’t work that way, and we know that because the science is conclusive.

It’s here that the greatest parallel between the COVID-19 pandemic and the climate crisis lies. We are seeing not what happens when individuals choose to consume less, but what happens when governments have all the information they need to act on a looming crisis and delay action, protecting profits over lives.