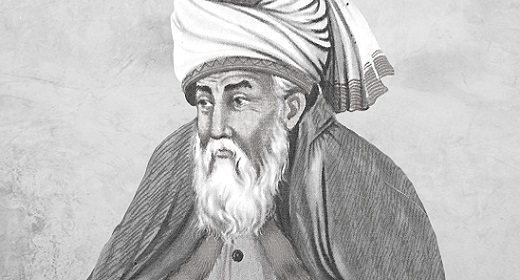 was a Persian poet, jurist, theologian, and Sufi mystic.  Rumi’s influence transcends national borders and ethnic groups:  Iranians, Turks, Cappadocian Greeks, Afghans, Tajiks, other Central Asian Muslims, the Muslims of South Asia, and many other groups have greatly appreciated his spiritual legacy for the past seven centuries.  Rumi’s poems have been widely translated into many of the world’s languages.  In recent years, Western interest in, and appreciation for, Rumi’s writings has grown enormously – so much so, that Rumi has been described as the “most popular poet in America.”

In his poetry, Rumi described his search for God and where he discovered The Beloved (as translated by Coleman Barks):

“I searched for God among the Christians and on the Cross and therein I found Him not.
I went into the ancient temples of idolatry; no trace of Him was there.
I entered the mountain cave of Hira and then went as far as Qandhar but God I found not.
With set purpose I fared to the summit of Mount Caucasus and found there only ‘anqa’s habitation.
Then I directed my search to the Kaaba, the resort of old and young; God was not there even.
Turning to philosophy I inquired about him from ibn Sina but found Him not within his range.
I fared then to the scene of the Prophet’s experience of a great divine manifestation only a ‘two bow-lengths’ distance from him’ but God was not there even in that exalted court.
Finally, I looked into my own heart and there I saw Him; He was nowhere else.”

Through his poem, “Unity of Spirit”, Rumi described how in mystical union all becomes One (as translated by R.A. Nicholson):

“When the rose is dead and the garden ravaged, where shall we find the perfume of the rose?  In rose-water.
Inasmuch as God comes not into sight, the prophets are His vicars [i.e., representatives].
Do not mistake me!  ’Tis wrong to think that the vicar and He Whom the vicar represents are two.
To the form-worshipper they are two; when you have escaped from consciousness of form, they are One.
Whilst you regard the form, you are seeing double:  look, not at the eyes, but at the light which flows from them.
You cannot distinguish the lights of ten lamps burning together, so long as your face is set towards this light alone.
In things spiritual there is no partition, no number, no individuals.
How sweet is the oneness of the Friend [i.e., God] with His friends [i.e, creation]!
Catch the spirit and clasp it to your bosom.
Mortify rebellious form till it wastes away:  unearth the treasure of Unity!”